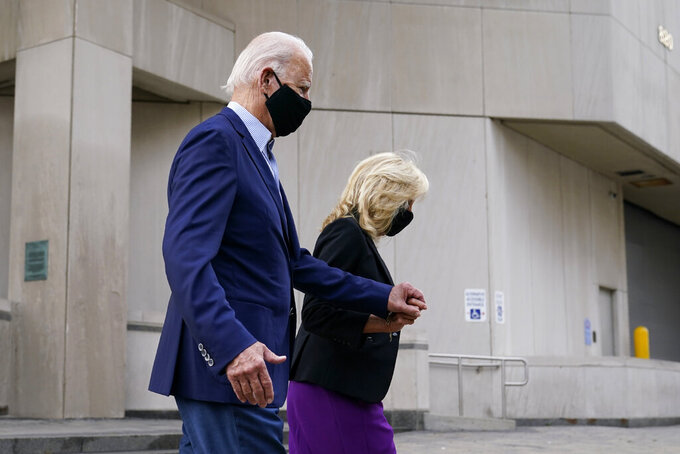 But after months of profligate spending, the attacks did little to diminish the Democratic nominee's standing. Trump’s formidable cash advantage has evaporated. And it is Biden who over the past month has outspent Trump by nearly double, advertising data shows.

Coming off a record-shattering $364 million August fundraising haul, Biden is pouring tens of millions of dollars into a torrent of ads airing in battleground states. The aim is to get out his message of competent leadership, while pinning blame on Trump for a lost year, wracked by disease, unrest and economic hardship.

Trump's campaign, meanwhile, has implemented recent belt-tightening measures and went dark on TV multiple times in August to conserve resources, worrying allies that Democrats could drown him out on TV with weeks left in the campaign.

On Monday, the Trump campaign canceled at least $2.5 million worth of advertising that was planned for Iowa, Ohio and Nevada, where he campaigned over the weekend, the data shows. Last week he also canceled ads in those states, as well as in Arizona, New Hampshire and Pennsylvania.

“It should be an alarm to every Republican donor that they’ve got to dig deep and give more,” said David McIntosh, a former Indiana congressman who leads the conservative Club for Growth, which has come to Trump's aid by running commercials on his behalf. “Fox News will help carry (Trump's) message, but the mainstream media won’t. That means he’s got to have enough resources to go over their heads and talk directly with voters.”

Advertising is not likely to be a deciding factor in the presidential contest, but it is a powerful tool to influence perceptions. And it has taken on heightened importance this year because the coronavirus has limited direct contact with voters, particularly for Democrats who have eschewed knocking on doors to encourage turnout.

That places added value on not only crafting messages that resonate with diverse swaths of the electorate, but also saturating TV and social media with them.

Biden is currently running ads aimed at suburbanites, Black voters and is also running Spanish language ads to target Latinos. He's also ramped up his own attacks on Trump.

One recent online series of ads targeting sports fans blamed Trump's handling of the pandemic for the absence of Big 10 football. The ads show aerial footage of empty football stadiums. As the final notes of the Star Spangle Banner ring out on an electric guitar, a caption flashes across the screen reading: “Trump put America on the sidelines. Let’s get back in the game.”

It seems to have gotten Trump's attention. After its roll-out, Trump tweeted, “I want Big Ten, and all other football, back - NOW” while insisting that “Dems don’t want football back, for political reasons.”

Other Biden ads seek to push back on Trump's false claims that Biden wants to defund the police and that his election would lead to violence in the streets. In fact, Biden has not called for defunding the police, and the ads highlight that the unrest gripping some American cities has happened on Trump's watch.

“We wanted folks to understand that the fact that they can’t go to church, they can’t go to school – that is a failure of American leadership. And it didn’t have to happen,” said Patrick Bonsignore, who is the director of paid media for the Biden campaign.

Trump's campaign dismisses concerns that they don't have the resources to compete, pointing to $200 million in ad reservations they've made through the election. And they argue Biden's many ads targeted to different demographic groups are a sign of weak support.

Last week they unveiled an ad called “Great American Comeback” that puts an optimistic spin on the pandemic, suggests a vaccine is just around the corner and pledges the economy will soon come roaring back.

Trump's campaign also notes Biden's spending in Minnesota, a longtime Democratic state that Trump is trying to contest this year. Biden has already spent $2.8 million there, and has reserved an additional $3.4 million in advertising, according to data from the ad tracking firm Kantar/CMAG. He will also travel to the state later this week.

But there are other signs of vulnerability in Trump's massive operation, which his former campaign manager Brad Parscale likened in May to a “Death Star."

Though Trump has outspent Biden on Facebook, which was long touted as one of the keys to Trump's 2016 victory, an analysis of spending data by the firm Applecart shows roughly two-thirds of those ads are still geared toward fundraising — not voter persuasion — in states that will not decide the election.

Of the remaining ads that do target battleground states, only about half are geared toward persuading voters, the analysis found.

“I’ve seen Star Wars and I know how it ends. It involved the Death Star destructing because it had a known construction defect," said Sacha Samotin, the co-CEO of the firm, which has done work for moderate Republicans, as well as moderate Democrats.

Trump is also playing defense in states he handily won in 2016. He's reserved $17.3 million in Ohio, a state Democrats initially wrote off this cycle, $15.8 million in North Carolina and $5.3 million in Iowa, the data from Kantar/CMAG shows.

Still, Democrats say they aren’t taking anything for granted. Biden's massive cash haul gives some reassurance, but Republican outside groups have increasingly picked up Trump's slack.

One of those, Preserve America PAC, is run by Chris LaCivita, the Republican strategist who oversaw Swift Boat Veterans for the Truth, the outside group that played a major role in Democrat John Kerry's 2004 defeat by airing misleading claims about his record as a Vietnam War hero.

"You have to have money in reserve to deal with what is inevitably coming down the path, which is smearing Biden, distorting his record, portraying him as somebody he isn’t — the classic Republican Swift Boat attack,” said David Brock, the founder of the American Bridge, a major Democratic outside group.

Trump also has an outsized ability to shape the election narrative from the White House, where he has repeatedly lashed out at his perceived enemies and sought to shift blame for his handling of the virus.

“The other side has the advantage of Donald Trump being an absolutely calculating no-shame liar,” said former Pennsylvania Gov. Ed Rendell, a longtime Biden friend.