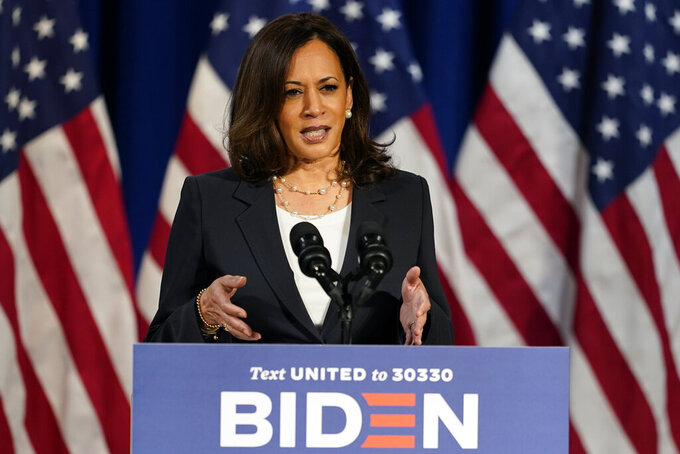 WASHINGTON (AP) — Joe Biden and Kamala Harris stepped up their criticism of President Donald Trump on Thursday, saying he’s rooting for violence amid unrest in Wisconsin and blasting him for a lack of leadership on the coronavirus pandemic, hours before Trump’s planned address on the final night of the Republican National Convention.

“He views this as a political benefit,” Democratic presidential nominee Biden said on MSNBC about protests in Wisconsin after police shot a Black man earlier this week. “He’s rooting for more violence, not less. And it’s clear about that.”

Harris, the vice presidential nominee, said Trump has showed “a reckless disregard for the well-being of the American people” in failing to contain the coronavirus. It was her first major Trump-focused speech since she joined the Democratic ticket.

The two had been largely silent during the first three days of the GOP convention, during which Republicans have tried to link them to protesters, warning a Biden presidency would make America less safe and erroneously saying he wants to defund the police.

Meanwhile, the police shooting of Jacob Blake in Kenosha, Wisconsin, has once again sparked protests against racial injustice and police brutality. Days later, a 17-year-old white gunman was arrested in connection with the shooting deaths of two protesters in clashes between vigilante militias and protesters.

“The more chaos and anarchy and vandalism and violence reigns,” Conway said, “the better it is for the very clear choice on who’s best on public safety and law and order.”

Biden does not support defunding the police but has advocated for overhauling U.S. police practices after years of high-profile killings of Black Americans by officers. Harris, meanwhile, sponsored a bill in Congress to ban certain police practices like chokeholds and no-knock warrants and would create a national registry for police misconduct, among other things.

In Washington Thursday, Harris defended the protesters in remarks sure to give fuel to Trump on the convention’s final night.

“It’s no wonder people are taking to the streets — and I support them,” she said. “Make no mistake: We will not let these vigilantes and extremists derail the path to justice.”

Biden, who has largely limited travel to near his home in Wilmington, Delaware, during the pandemic said he’d consider traveling to Kenosha himself.

“If I were president I’d be going,” Biden said. “But it’s hard to tell now what the circumstance on the ground is.”

Should he make the trip, Biden said, he would attempt to “pull together the Black community as well as the white community and sit down and talk about how we get through this.”

Of Trump, he said: “This is his America now. And, if you want to end where we are now, we’ve got to end his tenure as president.”

Harris focused her speech on Trump’s handling of the coronavirus, which has shuttered much of the U.S. economy for months and killed more than 170,000 Americans. She accused Trump of incompetence that has “become deadly” while painting Biden as a president who would address the pandemic seriously. She criticized Republicans for not painting a clearer picture of the pandemic’s toll during their convention.

“The Republican convention is designed for one purpose: to soothe Donald Trump’s ego,” she said. “He’s the president of the United States. It’s not supposed to be about him. It’s about to be about the well-being and the safety of the American people. And on that, Donald Trump has failed.”