Biden lauds NASA team for giving US 'dose of confidence' 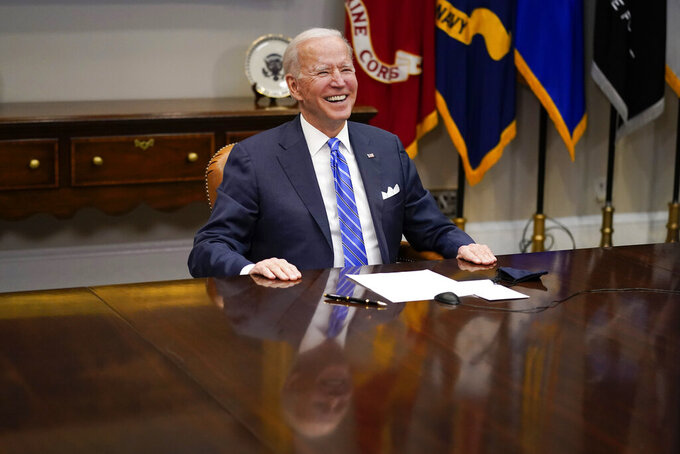 WASHINGTON (AP) — President Joe Biden on Thursday congratulated the NASA team responsible for last month’s successful landing of an unmanned rover on Mars and for giving the country a “dose of confidence” at a moment when the nation's reputation as a scientific leader has been tattered by the coronavirus pandemic.

Perseverance, the biggest, most advanced rover ever sent by NASA, became the ninth spacecraft since the 1970s to successfully land on Mars, traveling some 300 million miles in nearly seven months, as part of an ongoing quest to study whether there was once life on the planet.

“It’s so much bigger than landing Perseverance on Mars," Biden told members of the NASA team. “It’s about the American spirit. And you brought it back”

Biden watched on television as Perseverance’s touched down on Mars last month and called NASA’s Acting Administrator Steve Jurczyk to pass on his congratulations to the Perseverance team. But Biden said he wanted to speak directly to the team, which he said deserved credit not only for the astronomical feat but also with boosting the United States' reputation at a moment when it's sorely needed.

He recalled that another nation's leader recently told him that the U.S., once seen as competent, saw its standing fall with its response to coronavirus pandemic.

But Biden, who has made stemming a pandemic that has killed nearly 520,000 Americans his top priority, said that the Mars landing offered the nation a bit of inspiration at a moment when it's sorely needed.

“We can land a rover on Mars, we can beat a pandemic," Biden said. “And with science, hope and vision, there’s not a damn thing we can’t do as a country.”

The Perseverence landing comes amid a recent mad dash to Mars among rival space programs.

The NASA team landing on Feb. 18 marked the third visit to Mars in just over a week. Two spacecraft from the United Arab Emirates and China swung into orbit around Mars on successive days earlier in February. All three missions lifted off in July to take advantage of the close alignment of Earth and Mars.

NASA's car-size, plutonium-powered vehicle arrived at Jezero Crater, hitting NASA’s smallest and trickiest target yet: a 5-by-4-mile strip on an ancient river delta full of pits, cliffs and rocks. Scientists believe that if life ever flourished on Mars, it would have happened 3 billion to 4 billion years ago, when water still flowed on the planet.

Over the next two years, the rover, nicknamed Percy, will use its 7-foot (2-meter) arm to drill down and collect rock samples containing possible signs of bygone microscopic life.

Three to four dozen chalk-size samples will be sealed in tubes and set aside to be retrieved eventually by another rover and brought homeward by another rocket ship.