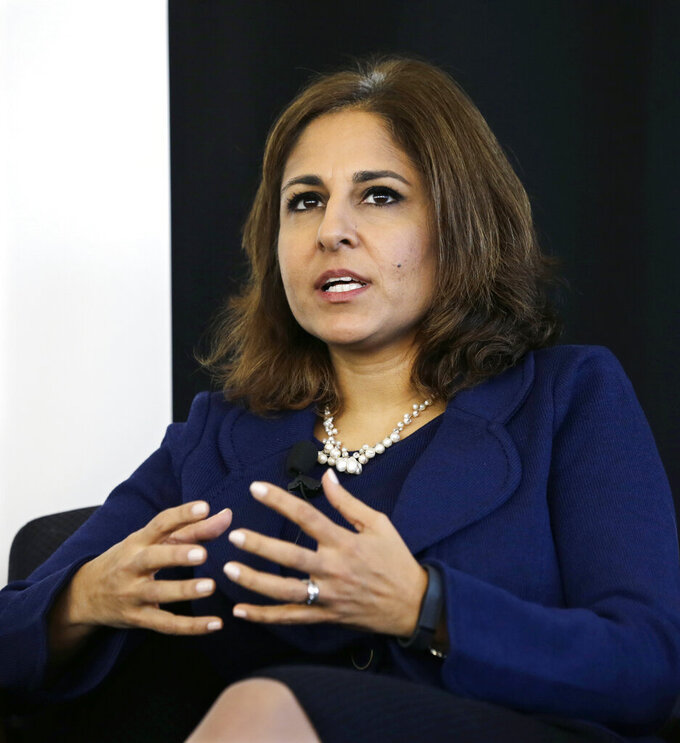 Neera Tanden, president of Center for American Progress, speaks during an introduction for New Start New Jersey at NJIT in Newark, NJ, Monday, Nov. 10, 2014. President-elect Joe Biden will have an all-female senior communications team at his White House, led by campaign communications director Kate Bedingfield. Tanden will be director of the Office of Management and Budget, according to a person familiar with the transition process granted anonymity to speak freely about internal deliberations. (AP Photo/Mel Evans)

WILMINGTON, Del. (AP) — With unemployment still high and the pandemic threatening yet another economic slump, President-elect Joe Biden is assembling a team of liberal advisers who have long focused on the nation’s workers and government efforts to address economic inequality.

Janet Yellen, announced Monday as Biden’s nominee for treasury secretary, served as chair of the Federal Reserve from 2014 to 2018, when she placed a greater emphasis than previous Fed chairs on maximizing employment and less focus on price inflation. Biden also named Cecilia Rouse as chair of his Council of Economic Advisers, and Heather Boushey and Jared Bernstein as members of the council.

All are outspoken supporters of more government stimulus spending to boost growth, a major issue with the coronavirus pandemic cramping the U.S. economy.

Those choices “signal the desire of the Biden administration to take the CEA in a direction that really centers on working people and raising wages,” said Heidi Shierholz, senior economist at the Economic Policy Institute and former Labor Department chief economist during the Obama administration.

Biden’s nominees are also a more personally diverse group than those of previous presidents.

Biden also selected Wally Adeyemo to be Yellen’s deputy, which would make him the first Black deputy treasury secretary. Rouse, Tanden and Adeyemo will all require Senate confirmation, and Tanden in particular is already drawing heavy Republican criticism.

Along with its progressive cast, Biden’s team also has years of experience in government and policymaking. And that’s earning plaudits from some conservatives, who note that the nominees are not a far-left group bent on strangling the economy, as President Donald Trump repeatedly warned during the 2020 campaign.

“They are intellectual liberals, but not burn-it-all-down socialists,” said Brian Riedl, a senior fellow at the Manhattan Institute and an adviser to Sen. Mitt Romney's presidential campaign. “They’re fairly conventional liberal economists and experts.”

Still, the Biden administration’s ambitious goals will face solid opposition from Republicans in Congress. The GOP needs to win one of two Georgia Senate seats in a Jan. 5 special election to retain control of the Senate, and the Republicans made major inroads on Nov. 3 in the Democrats' House majority.

“Most of the policies that Biden ran on will not survive a Republican Senate,” Riedl said. Those include proposals to raise the minimum wage to $15 an hour and significantly increase taxes on wealthy Americans.

Biden could secure another round of stimulus spending early next year, particularly if the recent spikes in confirmed virus cases push the economy into recession again. But such a package will likely have to come in under $1 trillion to get Senate Republican support, Riedl said, rather than the higher figure House Speaker Nancy Pelosi is seeking.

Tanden is the president and CEO of the liberal think tank Center for American Progress and was the director of domestic policy for the Obama-Biden presidential campaign. She first made her mark in the Clinton orbit, and served as policy director for Hillary Clinton’s 2008 presidential race.

A spokesman for GOP Sen. John Cornyn of Texas tweeted that Tanden “stands zero chance of being confirmed" as budget director, citing “an an endless stream of disparaging comments about" Republican senators. And Josh Holmes, a political adviser to Senate Majority Leader Mitch McConnell, tweeted that her confirmation was likely doomed.

Brian Deese, a former senior economic adviser in the Obama administration and now the managing director and global head of sustainable investing at BlackRock, is expected to be named director of the White House National Economic Council, according to a person familiar with transition plans who was not authorized to speak publicly on the matter.

Deese worked on the auto bailout and environmental issues in the Obama White House, where he held the title of deputy director of both the NEC and the OMB.

Deese and Adeyemo are both under fire from progressives for their connections to BlackRock, a giant Wall Street asset management firm. BlackRock has sought to avoid greater regulatory scrutiny by Treasury. And many activists assail the firm for owning huge stakes in oil and gas companies.

Rouse, a labor economist and head of Princeton University’s School of Public and International Affairs, served on the CEA from 2009 to 2011, and served on the NEC from 1998 to 1999 in the Clinton administration.

Notably, she organized a letter earlier this year signed by more than 100 economists calling for more government action to help Americans caused by the coronavirus pandemic.

“The planning for a fairer economy, grounded in facts and evidence, begins now,” Rouse tweeted Monday.

Alan Blinder, former vice chair of the Fed and a currently an economics professor at Princeton, praised Rouse's management style and her expertise in the economics of education and workforce training. Biden has proposed making two years of community college tuition-free.

“That kind of stuff is right in her wheelhouse," Blinder said.

Boushey, picked to be one of the three members of the CEA, is president and co-founder of the Washington Center for Equitable Growth, a think tank focused on inequality. The center conducts its own research and also provides grants to mostly left-leaning academics to study aspects of inequality.

Bernstein, also nominated for the CEA, was an adviser to then-Vice President Biden during the Obama administration before becoming a fellow at the Center on Budget and Policy Priorities, a left-leaning think tank. Bernstein has also worked as a social worker and was an economist at the Economic Policy Institute, a labor-supported think tank.