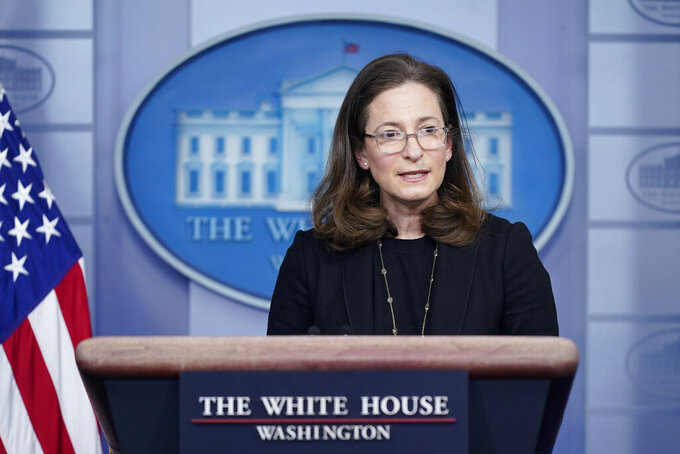 In an executive order, Biden directed the Education Department to examine rules that the Trump administration issued around Title IX, the federal law that forbids sex discrimination in education. Biden directed the agency to “consider suspending, revising or rescinding” any policies that fail to protect students.

“The policy of this administration is that every individual, every student is entitled to a fair education — free of sexual violence — and that all involved have access to a fair process,” Jennifer Klein, co-chair and executive director of the Gender Policy Council, told reporters at a White House briefing.

The orders were issued on International Women’s Day, a global celebration marking the achievements of women.

Both measures had been expected from Biden, who focused on gender equity during his campaign and previously promised to put an “immediate” end to rules that were finalized last year by former Education Secretary Betsy DeVos.

DeVos’ policy made sweeping changes to the way colleges respond to sexual harassment and assault, with provisions that bolster the rights of the accused and narrow the scope of cases schools are required to address. It was seen as a swing away from Obama-era guidance that focused on protecting victims of sexual misconduct.

Among other changes, DeVos’ rules narrowed the definition of sexual harassment, reduced the legal liability of colleges investigating sexual misconduct claims and gave accused students the right to cross-examine their accusers through a representative at live campus hearings.

Biden’s order for a review drew praise from civil rights groups that say DeVos’ policy has had a chilling effect on the reporting of sexual assaults, and also from colleges that say the rules are overly prescriptive and burdensome to follow.

“This is an important step,” said Shiwali Patel, senior counsel at the National Women’s Law Center. “The Title IX rules changes that took place under the Trump administration are incredibly harmful, and they’re still in effect.”

Although the order sets the stage for a major policy shift, change is unlikely to come quickly. Any effort to rewrite DeVos’ rules would have to go through a federal rulemaking process that can take years to complete. It took three years, for example, for DeVos to reverse the Obama guidance and complete her own set of rules.

Terry Hartle, senior vice president of the American Council on Education, said Biden's announcement was welcome but changes very little immediately. “In the meantime, the Trump regulations will remain in place," Hartle said.

“The right to due process is bigger than partisan politics — it is a cornerstone of American democracy,” said North Carolina Rep. Virginia Foxx, the ranking Republican on the House education committee. “By overturning these stakeholder-vetted, court supported rules, key protections for victims and the due process rights of the accused would be jeopardized.”

Some of the most contentious aspects of DeVos’ rules — including the requirement to allow cross-examinations — are expected to be eliminated in the Biden overhaul. But rather than reverting to Obama’s 2011 policies, some legal experts expect Biden to seek a middle ground that equally protects accused students and their accusers.

Part of the solution will likely include greater flexibility for schools as they respond to complaints, said Josh Richards, a lawyer who advises universities on Title IX issues. The scope of cases that colleges must address is also likely to be expanded again under the Biden administration, he said.

“I don’t think it’s necessary to go to the extent that the DeVos era rules went in importing court-style legal rules to these processes in order to provide a fair process to everyone involved,” Richards said.

A rollback of the existing regulation would be a blow to DeVos, who saw it as one of her signature achievements. In a parting letter to Congress in January, she urged lawmakers to “reject any efforts to undercut this important rule for survivors.” Their approval, however, is not needed to create new agency rules.

Biden is starting the process even as DeVos' policy faces ongoing legal challenges. Multiple lawsuits have been filed asking federal courts to strike down the policy, including a new suit filed Monday by a group of high school students in California. A lawsuit by the National Women’s Law Center is scheduled to go to trial in November.

While its suit is pending, the law center is urging the Biden administration to issue a directive suspending parts of the policy that are being challenged in court. Dozens of students and sexual assault survivors issued a separate letter on Monday urging Biden to issue immediate guidance that supports the rights of survivors.

Biden’s other order establishing the Gender Policy Council was issued after Trump disbanded an office specifically focused on women’s issues created during the Obama administration that was called the White House Council on Women and Girls.

The new council is tasked with helping push gender equity on the administration’s domestic and foreign policy efforts.

Some of the issues the council will focus on include combating sexual harassment, addressing structural barriers to women’s participation in the workforce, decreasing gender wage and wealth gaps, and addressing caregiving issues that have disproportionately affected women.

Biden signed the orders hours before delivering a White House address to mark International Women's Day. He used his speech to celebrate the recent nominations of Air Force Gen. Jacqueline Van Ovost and Army Lt. Gen. Laura Richardson to serve as combatant commanders. If confirmed by the Senate, they'll become just the second and third women to serve as combatant commanders in the military.

Biden also used the speech to make the case that more needed to be done to improve conditions for women who serve, including dealing with the scourge of sexual assault and harassment in the ranks. Defense Secretary Lloyd Austin has promised to make addressing the issue a top priority as reports of sexual assault have steadily gone up since 2006, according to Pentagon data.

Biden called the problem “nothing less than a threat to our national security.”

Ahead of Biden’s speech Monday, Vice President Kamala Harris marked International Women’s Day with a virtual address to the European Parliament, while first lady Jill Biden honored nearly two dozen women from around the world for demonstrating courage in pursuit of justice during a State Department ceremony.

Harris noted that women have been disproportionately impacted by the economic toll of the coronavirus pandemic. Since February 2020, more than 2.3 million have left the workforce, putting women’s labor force participation rate at 57%, the lowest it’s been since 1988, according to a National Women’s Law Center analysis.

“Simply put, our world does not work for women as it should,” Harris said.