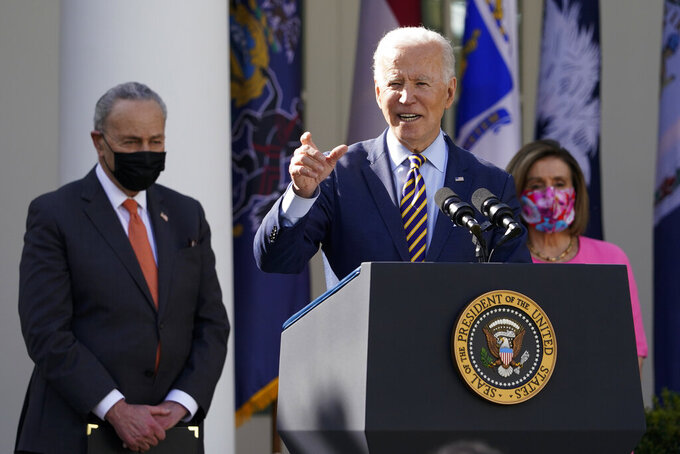 WASHINGTON (AP) — In 2009, then-Vice President Joe Biden was "Sheriff Joe,” the enforcer making sure federal dollars from a massive economic aid package were getting to the right places and quickly.

Biden signed the bill into law Thursday and then extolled it in a prime-time address to the nation that night. On Friday, he celebrated the package again, this time with Democratic lawmakers in his first Rose Garden event as president.

Biden said Friday that he would draw on his experiences in 2009, saying he worked four to five hours daily for six months to ensure that the stimulus succeeded. That same type of focus will be needed for coronavirus relief.

"The devil is in the details," the president said. “It’s one thing to pass the American Rescue Plan. It’s going to be another thing to implement it. It’s going to require fastidious oversight to make sure there’s no waste or fraud and the law does what it’s designed to do. And I mean it. We have to get this right.”

The White House has plotted an ambitious campaign to showcase the law's contents while looking to build momentum for future, more difficult parts of the president’s sweeping agenda. Biden will travel to the battleground states of Pennsylvania and Georgia next week to talk it up and other top administration officials will fan out around the country to do likewise.

West Wing aides say there is a determination to avoid the mistakes of more than a decade earlier, when President Barack Obama’s administration didn't do enough to promote its own economic recovery plan. But Biden gets a measure of credit for the successful implementation of the plan itself, according to veterans of the Obama administration.

Biden wound up with oversight of the government’s mammoth $787 billion stimulus plan after he wrote Obama a memo about how it should be run, and he savored his role as the program’s top cop. He said he had not “yet” looked at his vice president, Kamala Harris, to play the same role on COVID-19 aid.

Back then, Biden held weekly conference calls with mayors, governors and others to press for wise use of the money. He estimated that he spoke with over 160 mayors and every governor but one — Alaska Republican Sarah Palin, who was the vice presidential nominee in the 2008 election.

Biden also called regular Cabinet meetings to keep the Washington end of the program on track. At one 2009 Cabinet meeting, Biden pressed federal officials to give him a quick heads-up when projects fell behind schedule, saying, “You’ve gotta give me more ammo so I can pick up the phone and be the sheriff.”

Biden used his role as “Sheriff Joe” to cut red tape and “get the stimulus itself into the economy,” said Robert Gibbs, who was Obama’s press secretary at the time. He predicted that Biden would be equally relentless in selling the relief package this time.

“I would be surprised if two days passed in the next four years when you don’t hear discussion about the legislation," Gibbs said. “This is so important that it is literally something you say during the last rally of your reelection campaign.”

Biden is expected to appoint someone to oversee implementation of the COVID-19 relief plan. And while Biden himself will not be as in-the-weeds this time, aides still expect to get plenty of questions from him about exactly where and when the money is moving.

“He will play a different role: He is also the commander-in-chief and overseeing an economic recovery, overcoming the pandemic and addressing a range of crises,” said White House press secretary Jen Psaki. “But in his soul, he is a details guy and he will want to roll up his sleeves and call the local mayor, governor, school district to make sure the money gets out the door.”

There are challenges that lie ahead for Biden, although White House aides point to polling that shows the package is popular with Republican voters even though not a single GOP lawmaker voted for it. No Republicans attended the Rose Garden victory lap.

Biden’s White House has embraced the strategy of under-promising and then over-delivering, allowing it to frequently beat target dates and goals on, for instance, vaccine distribution.

But in his speech Thursday night, Biden laid out an ambitious timeline for all adult Americans to be eligible for the vaccine by May 1 and dangled the prospects of life getting closer to normal by July 4. And while he attached caveats about a possible virus surge, Biden's new timeline generated pressure to meet the bold headlines it produced.

Republicans, who are trying to label the COVID-19 relief bill as partisan, believe that they will be able to mount a far more effective pushback to the Biden administration when the president moves into more polarizing parts of his agenda such as immigration, climate change and voting rights.

“Less than two months into his presidency, and Biden is showing he never truly meant his promises of bipartisanship and unity,” said GOP chairwoman Ronna McDaniel. “Instead of working on meaningfully targeted relief legislation with Republicans, he chose a hyper-partisan bill full of pork.”

The Obama bill faced headwinds because it followed the bailout of the banks, engineered under President George W. Bush, and came as the economy remained stagnant. This time, Americans will start seeing the impact much sooner — some will even see their $1,400 stimulus check deposited this weekend.

Economic forecasts also project a robust recovery by year’s end, and Biden should be able to point to concrete job growth, making it an easier victory to sell than the one in 2009.

Jennifer Palmieri, former communications director in the Obama White House, said Obama had to make the case that “things are still bad but would be worse than they are if we had not passed this.” In contrast, she said, Biden is able to tell Americans “there are signs of life and hope and growth.”

She added: “The White House should feel empowered: The message to be drawn from the COVID bill is that Republicans in D.C. are out of touch with the rest of the country. Time to step on the gas.”