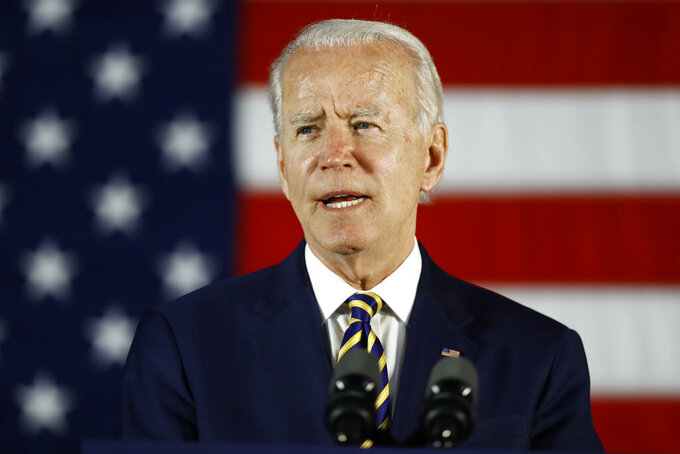 In this June 17, 2020, photo, Democratic presidential candidate, former Vice President Joe Biden speaks in Darby, Pa. John Bolton's claims that President Donald Trump urged China’s Xi Jinping to help him win reelection is casting a renewed spotlight on a major front in the 2020 presidential campaign: the battle over who has been softer on Beijing. China already loomed large in the contest as Trump and Biden, have traded accusations over corruption, geopolitical pandering and the president’s wild shifts in tone toward the Asia superpower (AP Photo/Matt Slocum)

Biden's top aides moved quickly on Thursday to argue that it's Trump who has taken a weak approach to the rising superpower. They seized on accusations from Bolton, Trump's former national security adviser, that the president continually kowtowed to Xi and ignored human rights abuses while trying to get his foreign counterpart’s assistance with domestic politics.

“The Bolton allegations are just the most noxious and hateful cherry on top of a sundae that already existed here," Ron Klain, a longtime Biden adviser, said in an interview. "We have seen for three years that Donald Trump has curried favor with authoritarian regimes that are willing to help him personally and politically.”

China already loomed large in the contest as Trump and Biden have traded accusations over corruption, geopolitical pandering and the president’s shifts in tone toward the country during the coronavirus pandemic, which ignited in the central Chinese city of Wuhan. But Bolton's accusations intensified the debate with less than five months remaining until the election.

Biden's team hopes the book will help reinforce their argument that the administration was slow to react to the pandemic, in part because of the tone set by Trump.

Klain, who served as President Barack Obama's Ebola coordinator and Biden's chief of staff when he was vice president, said he began briefing Biden on the situation in China as early as Jan. 10. Biden wrote an op-ed warning about the virus on Jan. 27 and began speaking about the issue on the campaign trail around that time.

Trump, meanwhile, told CNBC on Jan. 22 that the virus was “totally under control” and that he trusted Xi to handle the outbreak.

Trump’s team insists the president has taken a strong stance against Beijing.

“President Trump is the first president to actually stand up to China for their decades of trade cheating and he has held them accountable for lying to the world about the coronavirus,” said Tim Murtaugh, the Trump campaign’s communications director. “Joe Biden has spent his entire career appeasing China, failing to take them seriously as an economic competitor, and allowing his son Hunter to profit wildly through a Chinese-controlled bank.”

The president, eager to run for reelection on the back of a strong economy, resisted pressuring China for fear of rattling the stock market but also because he did not want to upset Xi, as The Associated Press first reported in February. The two nations had only recently completed the first phase of a sweeping trade deal, and Trump viewed the completion of the rest of the agreement as a key plank in his reelection platform, according to three White House and campaign officials not authorized to speak publicly about private conversations.

Trump’s initial reluctance to challenge Xi has echoes in a moment recounted in Bolton’s book, which the White House has tried to block from being published. According to Bolton, Trump turned a blind eye toward Xi’s construction of camps for Uighurs, who are predominantly Muslim and culturally and ethnically distinct from the majority Han Chinese population

“At the opening dinner of the Osaka G-20 meeting, with only interpreters present, Xi explained to Trump why he was basically building concentration camps in Xinjiang,” Bolton wrote of a 2019 meeting. “According to our interpreter, Trump said that Xi should go ahead with building the camps, which he thought was exactly the right thing to do.”

Trump also, according to Bolton, asked Xi for China to make agricultural purchases from U.S. farmers that could shore up the president’s hold on states he’d need to win this November.

“Turning a blind eye to human rights to China is a pattern; it’s an administration that is carrying out an amoral foreign policy that some might say is immoral," said Richard Haass, president of the Council on Foreign Relations, who noted that Trump has also not called out abuses by the likes of Saudi Arabia and Russia. “They want to look tough on China without actually being tough on China."

But after the pandemic tore across America, Trump’s rhetoric shifted dramatically, blaming China for not containing the coronavirus and underselling its severity. And as support for the president began to slide, the campaign looked to link Biden to China, suggesting that as Obama’s pointperson to Asia, he helped enable Beijing’s rise.

The campaign also claimed that Biden's son Hunter personally profited off his father’s international access. It also put tens of millions of dollars behind television and digital ads that resurface Biden’s previous praise for Beijing.

But polling suggests the ads have largely been a wash — the two men are viewed as about even in their ability to manage China — and have yet to make a significant impact on the public’s perception on the issue.

Democrats hope to keep the pressure on Trump into the fall. The Democratic National Committee this week launched a six-figure digital and television ad campaign hitting Trump on China, which party officials say will expand in the coming weeks. And it allows the Biden campaign to return to an issue that aides see as one of the candidate’s key assets in the campaign: his foreign policy experience and pledge to restore America’s standing as a global leader.

But Trump's allies have no plans to cede the matter. Beyond the pandemic, they still believe they can link the Obama administration's trade deals and economic policy to the loss of manufacturing jobs, particularly in the vital battlegrounds of Pennsylvania, Michigan, Ohio and Wisconsin, a strategy that worked in 2016.

“The upper Midwest was in a decline and it's because those jobs are in China and we won with that," said Steve Bannon, the chief executive officer of Trump's 2016 campaign, in a recent interview. “Trump can still deliver a tough message about getting those jobs back. Biden is the wrong guy for the moment."