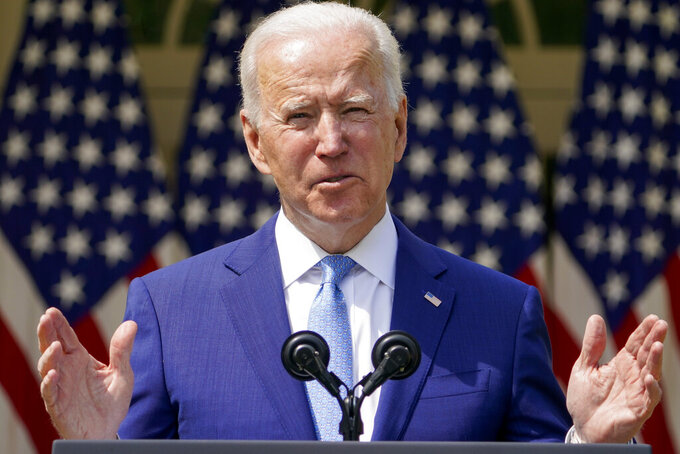 FILE - In this April 8, 2021, file photo President Joe Biden speaks about gun violence prevention in the Rose Garden at the White House in Washington. Biden released a $1.5 trillion wish list for the federal budget on Friday, asking for an 8.4% increase in agency operating budgets with substantial gains for Democratic priorities like education, health care, housing and environmental protection. (AP Photo/Andrew Harnik, File)

WASHINGTON (AP) — President Joe Biden is proposing a major expansion of the government’s role in long-term care, but questions are being raised over his using the low-income Medicaid program and piggybacking the whole idea on an infrastructure bill.

The White House infrastructure package includes $400 billion to accelerate a shift from institutional care to home and community services through the federal-state Medicaid program. The size of the financial commitment — about 17% of the $2.3 trillion infrastructure proposal — leaves no doubt that Biden intends to put his mark on long-term care.

Biden is acting as the nation emerges from a pandemic that has taken a cruel toll on older people, particularly nursing home residents. Long-term care was always going to be a growing issue in an aging society like the United States. The pandemic has made it even more consequential.

“The most important thing that Biden did is to say that ‘Long-term care is a major priority in my administration,’” said Howard Gleckman, a retirement policy expert with the Urban Institute think tank. “At the 30,000-foot level, this is really important because the president says so.”

Below that, the White House has not spelled out much. A summary of Biden’s plan says the money would go to expand home and community-based services so more people could get care. A major goal would be to raise pay and benefits for workers, nearly all of whom are women, many from minority and immigrant communities. Wages now average around $12 an hour. The proposal would also permanently reauthorize a program within Medicaid that helps people move out of nursing homes and back into their communities.

But Medicaid remains a safety net program and that means middle-class people can face arduous challenges to qualify even if they have staggering expenses for long-term care. Because Biden is funneling his funding boost through Medicaid, that leaves out the middle class.

Biden “is the working-class guy, the middle-class guy ... he knows if we only focus on Medicaid, his core constituency is not going to be helped, unless they wipe out their assets,” said William Arnone, CEO of the nonpartisan National Academy of Social Insurance, which works on policy.

An alternative to Medicaid could resemble Social Security and Medicare, which have no income-based tests for benefits, Arnone added. But that would cost far more than Biden is proposing to spend. People often assume Medicare covers long-term care, but it does not.

Some Republicans have also questioned whether long-term care has any place in an infrastructure bill. Senate Minority Leader Mitch McConnell called the White House plan a “liberal wish list” mislabeled as infrastructure. In rebuttal, Biden said infrastructure should include expanded services — not just roads and bridges — as part of what Americans need to “build a little better life, to be able to breathe a little bit.”

Medicaid spends about $200 billion a year on all long-term care needs, according to the Kaiser Family Foundation. Reflecting a growing sentiment that older adults should be able to remain in their homes, more than half the money goes to home and community-based care. The Biden bill would average out to an increase of $40 billion a year over 10 years.

“It seems like it’s a boondoggle to create more union workers and through the unions funnel money back to the Democrats” via campaign contributions, said Blase.

That makes union officials bristle. “It’s just fundamentally unacceptable that federal dollars should go to pay for poverty-level jobs, and we have an opportunity to change that,” said Leslie Frane, a vice president of the Service Employees International Union, which represents many health care workers.

Stepping back, Republicans generally have no quarrel with prioritizing in-home services over nursing homes. “It is bipartisan to support people who would be eligible for Medicaid staying at home rather than going into institutions,” said Blase. However, loosening eligibility rules will lead to “runaway expenses," he said.

“I’m going to do everything I can to help middle-class families,” Casey said. “What I’m trying to do is add dollars to Medicaid to serve more people. We got a foot in the door in the rescue bill with $12.7 billion, but obviously we’re going to need a lot more.”

Congressional officials said the approach that’s taking shape calls for increasing the federal contribution to states for home and community services while setting some basic national standards. Such standards could include the type and scope of services that states cover as well as a mechanism for raising pay for workers. They’re also looking at ideas such as creating state registries of qualified caregivers, which could be useful to middle-class people not eligible for Medicaid.