In Biden's early days, signs of Trump-era problems at border 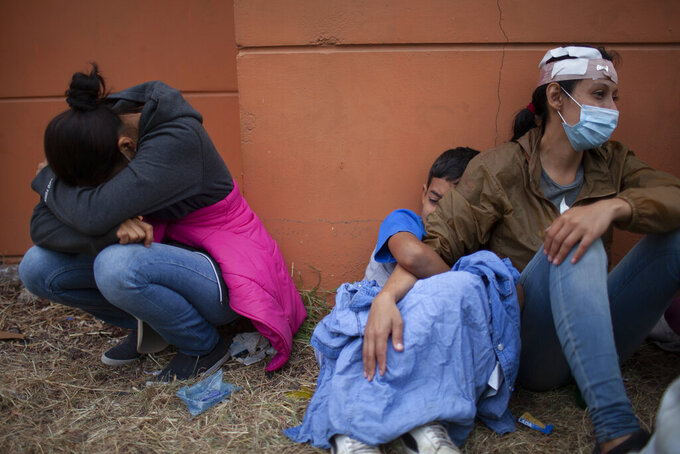 FILE - In this Jan. 17, 2021, file photo injured women, part of a Honduran migrant caravan in their bid to reach the U.S. border, weep as they sit on the side of a highway after clashing with Guatemalan police and soldiers in Vado Hondo, Guatemala, Guatemala. U.S. Federal law allows immigrants facing credible threats of persecution or violence in their home country to seek U.S. asylum. (AP Photo/Sandra Sebastian, File)

HOUSTON (AP) — The day after she gave birth in a Texas border hospital, Nailet and her newborn son were taken by federal agents to a holding facility that immigrants often refer to as the “icebox.”

Inside, large cells were packed with women and their young children. Nailet and her son were housed with 15 other women and given a mat to sleep on, with little space to distance despite the coronavirus pandemic, she said. The lights stayed on round the clock. Children constantly sneezed and coughed.

Nailet, who kept her newborn warm with a quilt she got at the hospital, told The Associated Press that Border Patrol agents wouldn’t tell her when they would be released. She and her son were detained for six days in a Border Patrol station. That's twice as long as federal rules generally allow.

“I had to constantly insist that they bring me wipes and diapers,” said Nailet, who left Cuba last year and asked that her last name be withheld for fear of retribution if she's forced to return.

Larger numbers of immigrant families have been crossing the U.S.-Mexico border in the first weeks of President Joe Biden's administration. Warning signs are emerging of the border crises that marked former President Donald Trump's term: Hundreds of newly released immigrants are getting dropped off with nonprofit groups, sometimes unexpectedly, and accounts like Nailet’s of prolonged detention in short-term facilities are growing.

Measures to control the virus have sharply cut space in holding facilities that got overwhelmed during a surge of arrivals in 2018 and 2019, when reports emerged of families packed into cells and unaccompanied children having to care for each other. U.S. Customs and Border Protection said Wednesday that its enforcement encounters at the southwest border rose 6% in January from the previous month, part of a steady rise since crossings plummeted at the beginning of the pandemic.

Most of the Border Patrol’s stations aren’t designed to serve children and families or hold people long term. To deal with the new influx, the agency on Tuesday reopened a large tent facility in South Texas to house immigrant families and children.

“We will continue to use all current authorities to avoid keeping individuals in a congregate setting for any length of time,” said the agency, which declined an interview request.

Meanwhile, long-term holding facilities for children who cross the border alone — some sent by parents forced to wait in Mexico — are 80% full. U.S. Health and Human Services, which runs those centers, will reopen a surge facility at a former camp for oil field workers in Carrizo Springs, Texas, as early as Monday. It can accommodate about 700 teenagers. Surge facilities have an estimated cost of $775 per child per day, and Democrats sharply criticized them during the Trump years.

There's no clear driving factor for the increase in families and children crossing. Some experts and advocates believe more are trying to cross illegally now that Biden is president, believing his administration will be more permissive than Trump's.

Many have waited for a year or longer under Trump's “Remain in Mexico” program that forces asylum-seekers to stay south of the border while a judge considers their case. The White House isn't adding people to the program but hasn't said how it will resolve pending cases. It's also declined to expel unaccompanied children under a pandemic-related public health order issued by Trump.

Others cite the fallout of natural disasters in Central America and turmoil in countries like Haiti.

The U.S. also has stopped sending back some immigrant families to parts of Mexico, particularly areas of Tamaulipas state across from South Texas. The change in practice appears to be uneven, with immigrants being expelled in other places and no clear explanation for the differences.

A law has taken effect in Mexico that prohibits holding children in migrant detention centers. But Mexico's foreign ministry said in a statement that agreements with the U.S. during the pandemic remain “on the same terms.” The statement noted “it is normal that there be adjustments at the local level, but that does not mean that the practice has changed or stopped.”

Some pregnant mothers, like Nailet, who have been refused entry to the U.S. cross again while in labor. Their children become U.S. citizens by birthright. The Border Patrol generally releases those families into the country, though reports have emerged of immigrant parents and U.S.-born children being expelled.

In Nailet's case, CBP said an unforeseen spike in the number of families crossing the border near Del Rio, about 150 miles (241 kilometers) west of San Antonio, led to her prolonged detention.

Advocates say officials should have released Nailet quickly, as well as other families with young children, and should speed up processing to avoid delays. Authorities have long resisted what they refer to as “catch and release," which they say inspires more immigrants to try to enter the country illegally, often through smugglers linked to transnational gangs.

Still in pain from giving birth, Nailet nursed her newborn in the cold cell. When she told border agents that the hospital said to return on Feb. 1, she says they refused to take her.

She was released Thursday and taken to a hotel with help from a nonprofit group, the Val Verde Border Humanitarian Coalition, which is one of several organizations receiving larger numbers of immigrant families after they leave government custody.

Dr. Amy Cohen, a child psychiatrist and executive director of immigration advocacy group Every Last One, described how border detention can traumatize a newborn: the cold, the constant light, the stress emanating from their nursing mother.

“That is a tremendously vulnerable time,” she said. “He is consuming the stress that she is experiencing. This is his first exposure to the world outside the womb. This is extraordinarily cruel and dangerous.”

A previous rise in illegal border crossings combined with delays in processing families led to horrendous conditions in several border stations in 2019, with shortages of food and water and children in many cases fending for themselves.

The year before, when the Trump administration separated thousands of immigrant families under its “zero tolerance" policy, many people were detained at a converted warehouse in South Texas. Thousands of children taken from their parents went into government custody, including surge facilities in Tornillo, Texas, and Homestead, Florida.