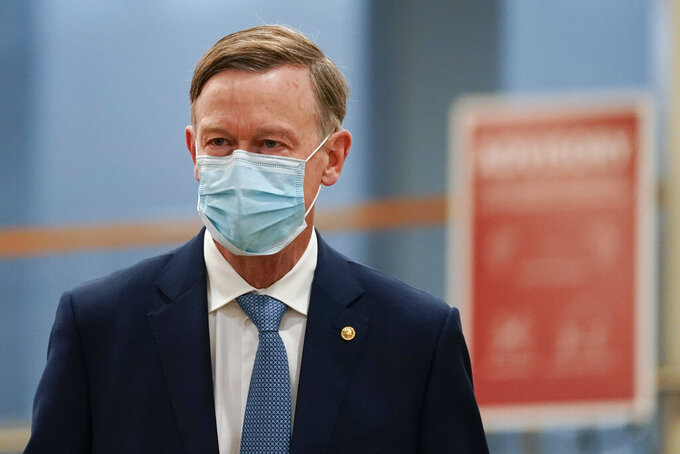 RALEIGH, N.C. (AP) — An advocacy group plans to spend millions next year to elect more doctors, scientists and other professionals to office, arguing the pandemic and Donald Trump's handling of it have powerfully underscored a need to bring people with scientific backgrounds into policymaking.

314 Action, a nonprofit organization with offices in Philadelphia and Washington, D.C., says it is aiming to spend $50 million in next year's congressional races, much of it targeted at helping Democrats pick up competitive U.S. Senate seats in North Carolina, Ohio and Pennsylvania.

The group formed months before Trump's presidency, but its mission took on new urgency as he pulled out of the Paris climate agreement, spread false claims about wind energy and even talked of injecting disinfectant to fight COVID-19. With the coronavirus pandemic at the front of Americans’ minds, 314 Action sees an opportunity to bring more attention to environmental and medical issues that it feels could be better addressed by policymakers who understand both politics and the science at play.

Trump "took what felt like a war on science and turned it into a straight-out war on facts,” said Shaughnessy Naughton, 314 Action's founder and president. “I think that did motivate a lot of scientists to realize these problems were not going to fix themselves and they needed to step up and get involved.”

Naughton, who formed the group in 2016 after she ran for Congress from Pennsylvania and lost, has seen some early successes. 314 Action backed former NASA astronaut Mark Kelly for the U.S. Senate in Arizona and Colorado Gov. John Hickenlooper, a former geologist, for the Senate in 2020. The group was also an early supporter of registered nurse Lauren Underwood, who won her 2018 election for the U.S. House from Illinois and has since launched the Black Maternal Health Caucus.

Hickenlooper calls Trump’s 2016 election a “wake-up call for anybody who cares about a better future,” but he also says Democrats need to effectively reach voters without making Trump the main focus.

“We shouldn’t have to have a scapegoat ongoing to get people to recognize the incredible importance of this process of observing the world around you and then using what you’ve learned to try to make a better future,” Hickenlooper says. “That’s the essence of human endeavor. We shouldn’t need scapegoats for that.”

The organization seeks to become the EMILY's List for science-oriented candidates, adopting some of the Democratic women's group's model for recruiting, training and financially backing candidates. And 314 Action says it will get involved in contested Democratic primaries, where its influence can be most visible. The group hopes to raise and spend $50 million largely from individual donors in the 2022 midterms.

The organization says it is preparing to spend millions in 2022 in Ohio supporting a potential candidate who rose to prominence during the pandemic. It also aims to help maintain and expand a Democratic Senate majority through independent expenditures and direct donations to candidates in Pennsylvania and North Carolina.

Josh Morrow, 314 Action's executive director, is trying to recruit Joan Higginbotham, the third Black woman to go into space. She lives in Charlotte and has never run for public office. He wants Higginbotham to join a growing field of Democratic candidates vying to fill a U.S. Senate seat in North Carolina being vacated by Republican Richard Burr.

Acton, a 55-year-old Democrat, faced intense backlash in the Republican-dominated state over the restrictive health orders she signed. Armed protesters even showed up outside her suburban home.

“Just watching what she was doing with COVID, how she was handling the response, we were super impressed by her,” Morrow said.

Acton could face a formidable primary challenge from Tim Ryan, a veteran Democratic congressman who unsuccessfully ran for president in the 2020 cycle. Neither she nor Ryan has formally entered Ohio's Senate race.

Trump's election prompted an April 2017 March for Science event, which 314 Action used as a recruiting opportunity. It launched a year earlier with minimal attention but has since trained several hundred interested candidates through a subcontractor.

To some degree, 314 Action is trying to help Democrats play catch-up. Republicans have had notable successes electing doctors to office: All the current doctors in the Senate are Republicans. But Democrats also have a science record of successes. President Joe Biden this month tapped former Florida Sen. Bill Nelson, who flew on the space shuttle right before the Challenger accident, to lead NASA. Also prominent in Democratic circles was Ohio's John Glenn, the third American in space and the first to orbit the Earth, who served as a Democrat in the Senate for more than 24 years.

Joe Fuld, founder of the Campaign Workshop, a D.C.-based Democratic political consulting firm, hosted training events for 314 Action in Chicago, San Francisco and Pennsylvania in 2018 and 2019. He said he told interested candidates about the importance of personalizing science-related subjects to voters, such as water quality. He also informed them of the realities of spending a lot of time calling donors and not working on policy issues they may be passionate about.

The image of a cordial, shy, introverted scientist unaware of political calculations or how to speak in simple sentences does not necessarily ring true. After the two or three days of training is completed, about 40% to 50% of attendees ultimately decide to run, while the rest become stronger local activists, Fuld said.

With Trump out of office, Fuld wants candidates to highlight long-term issues like climate change and infrastructure and describe what he views as a continued erosion of science under GOP leadership.

“The fact of what we're dealing with now with COVID, with climate change, those are appealing reasons for people to vote for science-based candidates,” Fuld said. “You don't need Trump to be a part of that.”