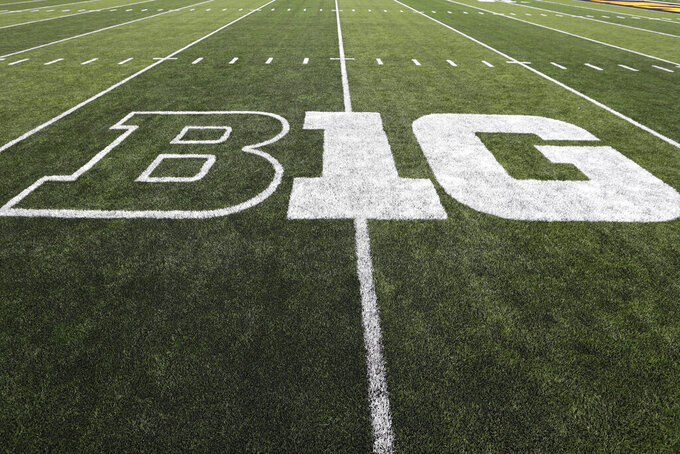 FILE - In this Aug. 31, 2019, file photo, the Big Ten logo is displayed on the field before an NCAA college football game between Iowa and Miami of Ohio in Iowa City, Iowa. The Big Ten released its 10-game conference-only football schedule beginning as early as Labor Day weekend but cautioned there is no certainty games will be played. (AP Photo/Charlie Neibergall, File)

The Big Ten released its 10-game conference-only football schedule beginning as early as Labor Day weekend but cautioned Wednesday there is no certainty games will be played.

The Big Ten was the last of the Power Five conferences to announce its schedule as college football navigates how to play games amid the coronavirus pandemic.

Under the revised schedule, teams will play conference opponents they originally were set to meet and will have one additional cross-division game.

The regular season starts the weekend of Sept. 5 and runs through Nov. 21. There is a built-in cushion allowing for makeup games to be played, if necessary. The 10 games would be played over at least 12 weeks, with each team having two open dates. Nov. 28 also is available for makeup games.

If the coronavirus situation dictates, the season could start Sept. 12, 19 or 26.

The Big Ten championship game in Indianapolis remains scheduled for Dec. 5 but could moved as late as Dec. 19.

The conference will allow teams to begin preseason practices Friday, or earlier if a team's season begins before Sept. 5.

"In making this announcement, the Conference acknowledges that there is much work to be done on our campuses, in our communities and across the country to gain control of a virus that continues to spread at an alarming rate,” the conference said in a statement. “While the Conference remains hopeful for a September 2020 start in all fall sports, including football, issuing a schedule does not guarantee that competition will occur. While our strategy is to continue planning for all fall sports, if the virus continues to spread among our students despite our many preventative measures, including testing and quarantine protocols, we are also prepared to delay or cancel competition pursuant to local and state public health orders or the recommendations of our medical experts.”

The conference also released its medical policies and protocols for all sports on testing requirements, and quarantine and isolation. Testing will be managed by a third-party laboratory to ensure consistency across the conference.

The player advocacy group College Athlete Unity, in a letter to the Big Ten and NCAA published on The Players' Tribune website, called on the conference to penalize schools that don't adhere to testing protocols and other safety measures. The group, among other things, also asked for an adjustment to players' cost-of-living stipends to account for the increase in personal expenses related to limited access athletic facilities and reimbursement for stipends that were reduced during the summer.

Many of the concerns raised by College Athlete Unity echo those of the #WeAreUnited group that has forwarded proposals to Pac-12 administrators.

The Big 12 announced this week that its teams would play nine conference games beginning in mid- to late September, with one home nonconference game before that.

Atlantic Coast Conference teams will play 10 conference games and one nonconference game that will be held in the state of the ACC team, with first games the week of Sept. 7.

“It would be purely speculation for me to sit here today and say this is what percent I think we’ll have a season,” Warren said. “I know from my standpoint I’m taking this entire process, this entire journey, on a day-to-day basis.”

How many fans will be in the stands remains a question.

Rutgers already has announced that all athletic events would follow state guidelines limiting outdoor gatherings to 500 people or fewer. Maryland said Wednesday it is preparing to begin the season without fans.

Wisconsin athletic director Barry Alvarez sent a letter to season ticket holders saying the school “is preparing for the reality that it will not be appropriate for thousands of fans to gather in Camp Randall on Saturdays this fall.”

Illinois noted that current state guidelines allow for attendance up to 20% of stadium capacity.