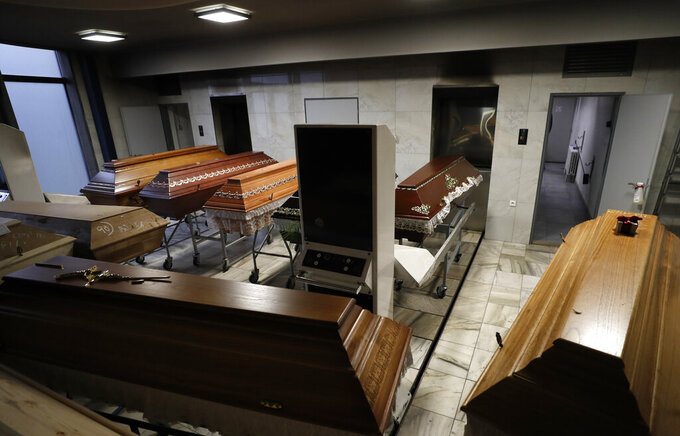 Caskets are prepared to be incinerated at a crematorium in Ostrava, Czech Republic, Thursday, Jan. 7, 2021. The biggest crematorium in the Czech Republic has been overwhelmed by mounting numbers of pandemic victims. With new confirmed COVID-19 infections around record highs, the situation looks set to worsen. Authorities in the northeastern city of Ostrava have been speeding up plans to build a fourth furnace but, in the meantime, have sought help from the government’s central crisis committee for pandemic coordination. (AP Photo/Petr David Josek)

OSTRAVA, Czech Republic (AP) — All three cremation chambers are working round the clock, while storage capacity for caskets has been repeatedly boosted.

Despite all the efforts, the Czech Republic's biggest crematorium, in the northeastern city of Ostrava, has been overwhelmed by mounting numbers of pandemic victims.

On Thursday, cars from funeral companies delivered caskets every few minutes, some with “COVID” written on them. These days, the crematorium receives more than 100 coffins daily, about double its maximum cremation capacity.

Authorities in Ostrava have been speeding up plans to build a fourth furnace but, in the meantime, have sought help from the government’s central crisis committee for pandemic coordination.

“It’s an extraordinary situation,” said Katerina Sebestova, a deputy mayor in Ostrava. “Nobody here remembers anything like that.” The facility belongs to Ostrava City Hall.

“It’s simply because we have 60% more deceased than we had a year ago. So, we have to deal with storage capacity and the capacity to cremate," she said.

Up to 1,000 bodies a month were cremated in Ostrava before the pandemic struck. The number rose to 1,550 in November and 1,570 in December after a surge at the end of October, crematorium director Ivo Furmancik said.

The Czech Republic was spared the worst of the pandemic in the spring only to see its health care system approach collapse in the fall, about the time the spike began. It has been hard-hit again with new infections reaching a record high of 17,668 on Wednesday, a record set for the second straight day.

The surge in infections is likely again to be followed by a surge in deaths.

“To tell the truth, I expect that the situation won’t get any better but unfortunately will likely get worse,” Furmancik said.

The crematorium has built an overflow cold storage container to double its storage capacity by 60 coffins, and further boosted it by adding a couple of movable freezers for another 100. But the cremation chambers can’t take any more.

“For two-and-a-half months we have been working nonstop with no pause for maintenance,” Furmancik said. “So, this really is not an optimal situation. How long can this last? I am worried that because of this intensive use the crematories could get seriously damaged at any moment.”

Ostrava is the capital of the Moravian-Silesian Region, which, together with another region, tops the country's virus death toll with some 1,500 deaths.

Interior Minister Jan Hamacek, who heads the central crisis committee, has promised to create a system to distribute bodies to other crematoriums across the country but some have already indicated they are reaching their own limits.

“Another, tougher option, is that we’ll take only the number of the deceased we are capable of cremating,” Furmancik said.