Bills D flexing its identity in time for late-season push 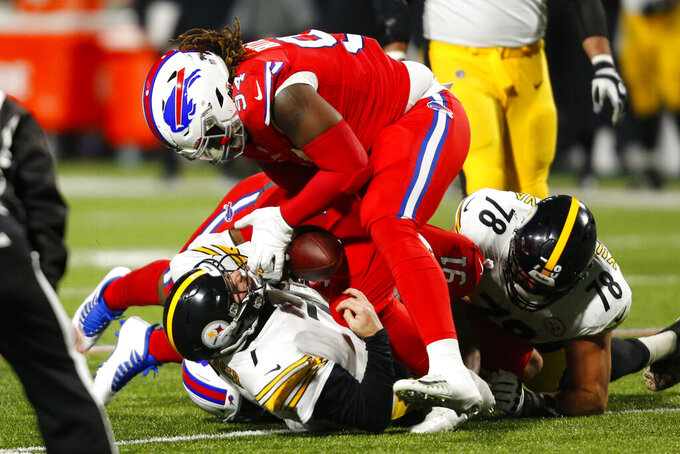 Pittsburgh Steelers quarterback Ben Roethlisberger (7) fumbles the ball as he is sacked by Buffalo Bills defensive tackle Ed Oliver (91) and Vernon Butler (94) during the second half of an NFL football game in Orchard Park, N.Y., Sunday, Dec. 13, 2020. The Bills recovered the ball. (AP Photo/Jeffrey T. Barnes )

ORCHARD PARK, N.Y. (AP) — Leslie Frazier’s confidence in the Buffalo Bills' defense reaching its potential never wavered even at the lowest point a month-and-a-half into the season.

The coordinator maintained faith in his veteran-laden unit and took into account the limited amount of preparation due to the coronavirus pandemic-shortened offseason. He preached patience over panic that a turnaround would happen eventually.

“I knew the character of these guys. I knew what our talent level was like, and I also understood the circumstances we were operating under,” Frazier said Monday, a day after a 26-15 win over Pittsburgh.

“It’s just going to take longer than it ordinarily would,” he added of an opening six-week stretch in which Buffalo ranked 25th in the NFL against the run and 24th against the pass. “I just tried to continue to encourage our guys because I knew a day like last night was coming.”

Though Buffalo’s defensive production has been trending upward since Week 7, the payoff for Frazier was on full display when his players broke into a dance on the sideline with 7:11 remaining to celebrate Levi Wallace’s interception that essentially sealed a 10th victory.

The interception punctuated the Bills’ most complete defensive performance of the season. Buffalo forced a season-best eight punts, limited the Steelers to convert on just 1 of 10 third-down opportunities, and got two turnovers, including Taron Johnson returning an interception 51 yards for the Bills' first defensive touchdown since 2017.

And it was an outing that inspires confidence in a team preparing to play at Denver (5-8) on Saturday — with a chance to clinch Buffalo’s first AFC East title since 1995.

“There was a lot unexpected coming into the season,” safety Jordan Poyer said. “We had high and we still do have high expectations in ourselves as a defensive unit. And us not playing our best ball earlier on in the year kind of helped us refocus our focus.”

The proof is evident in the numbers.

In a 4-2 start ending with consecutive losses to Tennessee and Kansas City, Buffalo was allowing an average 28 points and 387 yards per outing. In it past seven, Buffalo has allowed 22 points and 344 yards per game. If not for giving up DeAndre Hopkins’ 43-yard touchdown catch with 2 seconds left in a 32-30 loss at Arizona, the Bills would be riding a seven-game winning streak.

More impressive over the past seven games is how the Bills have generated 14 of their season total 21 takeaways, 20 of their 31 sacks, and limited opponents to converting just 25 of 80 third-down attempts after allowing 38 of 66 in their first six.

The improved production better reflects a defense that finished the past two seasons among the NFL’s top units, and returned nine starters from last year.

Though returning mostly intact, the Bills chalk up their slow start to the various limitations preventing players — particularly the newcomers — from bonding on and off the field, be it in practice, film study or the weekly get-togethers at their homes.

“Honestly, Week 5, 6, 7, I’m still getting to know guys, and that’s unique,” safety Micah Hyde said, noting how players traditionally get that out of the way during training camp. “I feel like the camaraderie that we had wasn’t there right away. But as you can see, we’re working toward that.”

When it came to the newcomers, the lack of a preseason meant the Bills' staff and players had to learn on the fly to see how they fit in regular-season games. This became especially critical with a revamped front that eventually had end Jerry Hughes switch to the left side because offseason free-agent addition Mario Addison was more accustomed playing on the right. Injuries also played a factor, with starting linebackers Tremaine Edmunds and Matt Milano, and cornerbacks Wallace and Josh Norman all missing games.

“You can have the same exact players each and every year on defense and it’s going to be a different situation. Nothing’s promised in this league,” Hyde said. ” Just because you have eight, nine, 10 guys returning, that doesn’t mean you’re going to have a top-three defense all over again.”

The players have adopted a mantra that it’s better to be at their best in December than September. And they have a prolific Josh Allen-led offense to thank for picking up the slack until the defense began finding its identity.

That doesn’t mean the Bills believe they’ve arrived just yet.

“We’ll continue to climb that hill. We’ve got areas we’ve got to continue to work on,” Poyer said. “It’s continuous improvement. We want to be playing our best ball next game.”