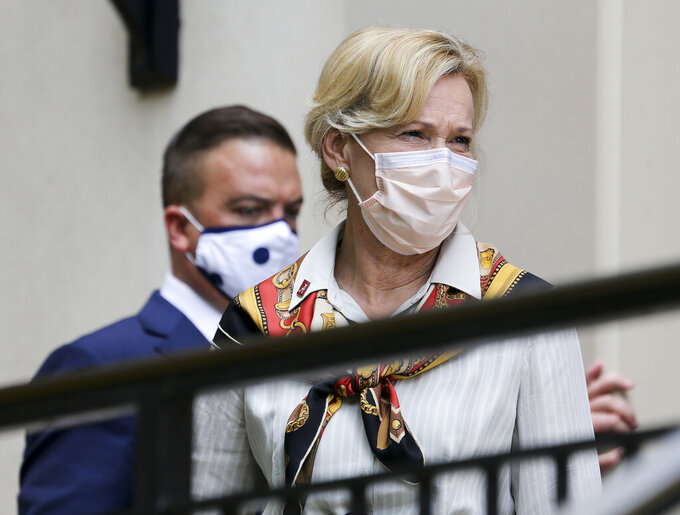 TUSCALOOSA, Ala. (AP) — White House coronavirus response coordinator Dr. Deborah Birx on Friday praised Alabama’s response to the pandemic, but expressed concern about the number of men she saw not wearing masks as she visited the state.

During a stop at the University of Alabama, the site of a recent outbreak, Birx praised the state leadership, university administrators, students and citizens for their response to the virus. But she noted a gender gap as she traveled the state in mask wearing, one of the tools to curb the spread of the virus. Birx said she purposely drives on visits so she can see what happens in gas stations, coffee shops and as people are “going around their everyday life.”

Birx noted that she travels frequently but has remained negative for the virus.

“It is possible to be out and about and protect yourself and protect others. ... It comes down to not only governmental leadership but each of us doing our part and ensuring we are doing it every day,” she said.

According to data kept by The Associated Press, the rolling average of daily news cases in Alabama has fallen by nearly 27% over the past two weeks, but the state still ranks fifth in the country for new cases per capita in that time period. Alabama officials have reported more than 136,000 cases of COVID-19 in the state and at least 2,333 deaths caused by the virus.

More than 2,000 students at the University of Alabama have tested positive for the new coronavirus since classes resumed last month. That led university administrators to issue a moratorium on in-person campus events. The city also temporarily closed bars.

She thanked officials and students for taking steps to try to reduce a coronavirus outbreak on campus.

The doctor said she appreciated the response of students.

“And understanding crowded bars without a mask are not a good situation at this point because of the amount of virus that can be spread during that time,” she said.

The University of Alabama said this week that so far 600 students have been sanctioned for breaking COVID-19 rules and 33 have been effectively suspended while disciplinary action proceeds.