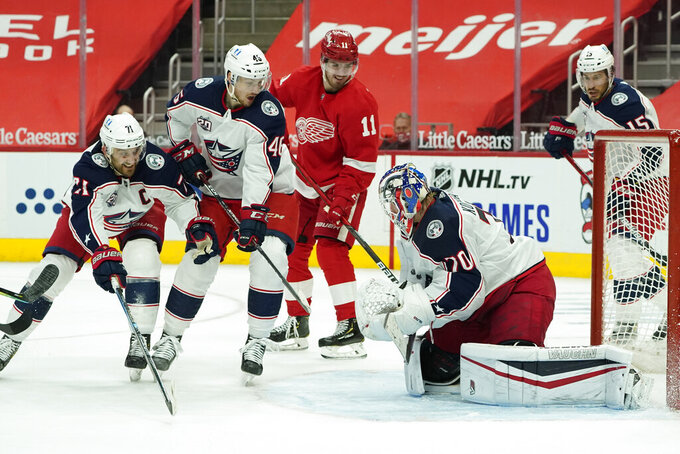 DETROIT (AP) — Alexandre Texier and Pierre-Luc Dubois scored 1:16 apart early in the third period to give the Columbus Blue Jackets a two-goal lead and they held on to beat the Detroit Red Wings 3-2 on Monday.

Oliver Bjorkstrand scored late in the second period and Joonas Korpisalo finished with 35 saves in the Blue Jackets' first win of the season.

“Everybody is fighting for points," Dubois said. “It’s a short season.”

“We’ve been more dangerously offensively the last two games, but we’ve given up too much," Red Wings coach Jeff Blashill said.

Texier's wraparound goal 5:10 into the final period put the Blue Jackets ahead for the first time. Dubois beat Greiss on a breakaway at the 6:26 mark to help them win after dropping the first two games of the season at Nashville.

The Red Wings pulled Greiss with a few minutes left to add an extra skater. Many players ended up in the crease and the puck was in the net with just less than a minute remaining.

After some fights broke out, video review determined the goal was good because of the actions of a Columbus defenseman Zach Werenski against Ryan.

“I think it was a slight push by Z and Bobby swan-dived," coach John Tortorella said.

Dubois has asked for a trade, but is in no mood to talk about his request publicly.

“I have one job and it’s to play hockey," he said. “The only thing I can control is how I play. I just have to go out there and play hockey.”

Dubois signed a two-year contract worth $10 million that was not the win-win deal he and the franchise were hoping for days before opening training camp. He had 65 goals and 93 assists over his first three seasons with the Blue Jackets.

Ryan has scored three goals in two games with his new team after the Ottawa Senators bought out the last two years of his contract. He won the Masterton Trophy, the NHL’s award for perseverance, after publicly sharing his battle with alcohol.

“This is a prove-it year,” Ryan said. “I have a chance to take the step forward that I should have taken years ago. That didn’t happen because of the outside stuff, but now I have a chance. I didn’t want to get off to a slow start, so contributing right away has been nice.”

Ryan has provided desperately needed scoring after missing the season-opening, 3-0 loss to Carolina because of an undisclosed injury.

“He’s a smart hockey player and he’s been our best player in these last two games," Dylan Larkin said.

Bjorkstrand had a “Gordie Howe hat trick” with a goal, assist and fight in Detroit, where the late Hall of Famer played for much of his career.

Bjorkstrand joked that he does not have a Gordie Howe hat trick bonus in his contract.

“You don’t really expect that from me, but it happens," he said.

It was also unexpected to see two friends, Werenski and Larkin, drop gloves and throw blows.

Werenski and Larkin were teammates at Michigan after playing together in USA Hockey's National Team Development Program. And, Larkin gave Werenski's parents tickets for the game on Monday.

“I elbowed Zach and he wasn’t happy about it so we fought," Larkin said. “It wasn’t our first fight. We’ve had a lot of battles."

Both teams were missing at least a player because of the NHL's COVID-19 protocols. The Red Wings were without center Robby Fabbri, who scored in their win Saturday night, and winger Adam Erne after both played in the first two games of the season.

Mikko Koivu has not made his Blue Jackets debut because the 37-year-old center, who had spent his entire career in Minnesota, had to miss a third straight game.

These two teams will play again at Little Caesars Arena on Tuesday night, roughly 27 hours after their first of eight scheduled games against each other.

“We’re going to play a lot of games against the same teams," Texier said. “It’s going to be intense at times. We have to keep our composure.”