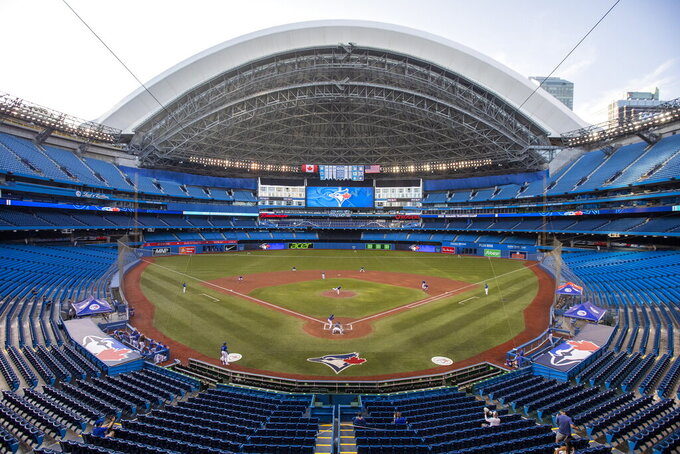 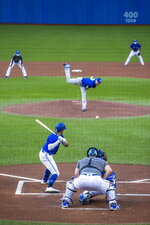 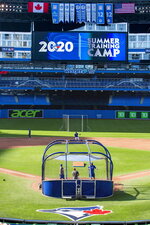 TORONTO (AP) — Blue Jays infielder Travis Shaw says he's not interested in confining himself to the hotel attached to the Rogers Centre for the summer if major league baseball is granted an exemption from the Canadian government to play baseball in Toronto amid the pandemic.

The Blue Jays have created a quarantine environment at Rogers Centre and the adjoining Toronto Marriott City Centre Hotel during training camp. The current exemption does not cover the regular season and player travel between the U.S. and Canada.

MLB requires an exemption as anyone entering Canada for nonessential reasons must self-isolate for 14 days. The U.S.-Canada border remains closed to nonessential travel until at least July 21 and that is widely expected to be extended.

Any exemption likely means the Blue Jays would not be allowed to leave the hotel attached to the Rogers Center when they play home games in the city.

Players have not been allowed to leave the stadium and hotel since arriving for training camp earlier this month. Players are subject to a possible fines of $750,000 Canadian (US$551,000) and/or up to six months in jail if they leave the hotel and stadium.

“We were told two weeks... not all summer... all summer is a bit much,” Shaw also tweeted.

Shaw posted two additional tweets shortly after his initial tweet, but they were later deleted.

``1) Let me be clear. We are on board with the TWO week quarantine. I currently have a PAID for condo a block away from the stadium that I can’t use. At no point would I risk public safety or not follow rules. Is it wrong to want to live in a place that I’ve already paid for...″

He added: ``2) to be able to go on a walk (WITH A MASK) to be able to get fresh air, walk to go get takeout food (not eat inside). We aren’t looking to party, hit the patios, go out at night, anything like that. Public safety is priority number 1....″

Former Blue Jays pitcher Marcus Stroman, who now plays for the New York Mets, tweeted that it isn’t “realistic” to ask Blue Jays players to self isolate in the hotel in Toronto during the season.

“I actually believe it’s the right thing to do. I’m just saying it doesn’t seem realistic. That’s all. I want all my @BlueJays brothers happy and health always,” he tweeted.

Blue Jays President Mark Shapiro has said the team hopes to know by July 12 if it will be allowed to play in Toronto. The club's training facility in Dunedin, Florida, also is an option.

Toronto will begin its 60-game schedule on July 24 at Tampa Bay, which is about 25 miles from Dunedin. The Blue Jays’ first home game is set for July 29.

“We’re here for spring camp. Nothing else has been decided. That's all we know," Toronto manager Charlie Montoyo said.

Montoyo said he feels safe in Toronto and he's grateful for the current exemption for training camp. “We're going to follow all the guidelines,” he said.

A Blue Jays spokesperson said the team is continuing to work with the government on the regular season.

Shapiro has said the players prefer to be in Toronto over Florida. The number of COVID-19 cases is falling in Canada while cases are surging in the United States.

Multiple Blue Jays players initially didn’t make the trip to Toronto for training camp after one player tested positive for the coronavirus. Players who were in contact with the unnamed player remained in Florida for further testing. Montoyo said some players arrived Thursday night.

Shapiro has said visiting teams would not leave the confines of Rogers Centre and the hotel attached to the stadium if the regular season plan is approved.

“I wanna make it clear, we’re not asking for special treatment,″ Blue Jays outfielder Randal Grichuk tweeted Friday. “We understand that we need to stay in a ``quarantine bubble″. We wanna make sure everyone is safe. The toughest part is them not allowing our family to come with us. That’s what makes it tough for a lot of guys.”