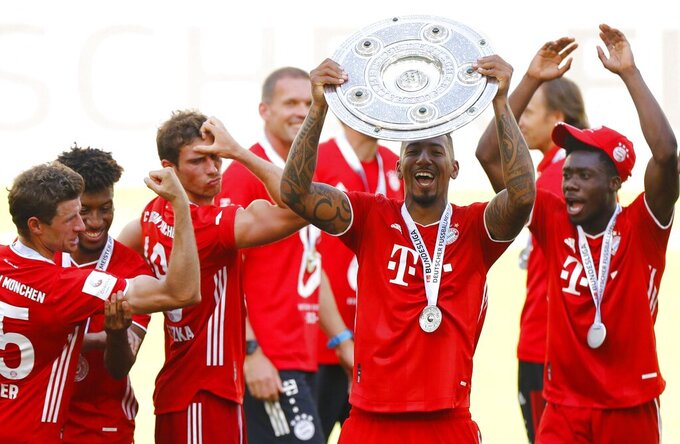 FILE - In this June 27, 2020, file photo, Munich's Jerome Boateng lifts the trophy after the German Bundesliga soccer match between VfL Wolfsburg and FC Bayern Munich in Wolfsburg, Germany. Boateng has talked to teammates about the pain of facing racist abuse. (Kai Pfaffenbach/Pool Photo via AP, File)

For weeks Bayern Munich players had been showing solidarity with the Black Lives Matter movement at games when Jerome Boateng was approached by teammates for a deeper conversation.

“Before our break, I talked actually to Joshua Kimmich and Leon Goretzka about it,” Boateng recalled on a video call. “They asked me how to support, how does it feel, what happened to you when you were younger.

"So I could tell them my story, what were my experiences, and why is it so painful and hard to hear those things, or (have those) experiences, and then imagine people who are younger, maybe they face this for the first time, what you can do, how can people support it.”

The 31-year-old Boateng, who was born in Berlin to a German mother, and father from Ghana, has faced monkey chants in the past at games.

“There are some situations of course that are really hard to help, but you can always help in a situation,” the defender said. “Of course, when it’s a group against one, and there’s nobody near, you never know, but if there’s somebody near, please call police, help, whatever, because that can help and save maybe a dangerous situation.”

Bayern players were taking a knee at games before the pandemic-delayed Bundesliga season ended in June. Now the German champions are preparing to take the field again in the Champions League next week, in the round of 16 against Chelsea where they lead 3-0 from the first leg in February.

“I think it’s very powerful and very important that we continue this (gesture) in the Champions League, especially of course in the final, because the whole world will look,” Boateng said. “I think it’s important to continue, and also in other sports, and hopefully in some sports that are not back yet, hopefully they will join us.”

Beyond gestures like taking a knee, Boateng hopes for change across German football to ensure there is greater diversity at the top of the game and more Black coaches. Daniel Thioune, the first German-born Black coach in the country’s professional leagues, was hired by Hamburg earlier this month.

“I would wish of course to see that more in Germany," Boateng said, “because you see it more in the U.K. and different countries.”

The brutal police killing of George Floyd in Minneapolis in May sparked worldwide calls for an end to racial injustice and discrimination — a message that has been carried onto football pitches across Europe.

“I think about racism — you never can do enough as you see how bad it is still in the world right now," Boateng said. “If we were doing enough we’d not be in this situation still and talking about it. I am really clear about that and everybody has to know that this is not something that goes in a month.”