Boats emerge from Sahara sand to transport migrants to Spain 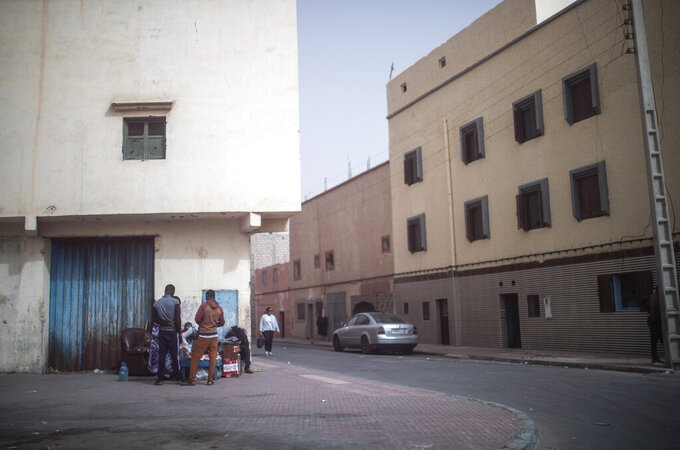 Sub-Saharan African migrants hang out on a street corner in Dakhla, Morocco-administered Western Sahara, Tuesday, Dec. 22, 2020. The peninsula city of Dakhla boasts a thriving fishing port, and kitesurfing enthusiasts flock to its waters. But in recent months, its beaches have become a hot spot of the moment for smuggling networks eyeing the Canaries, 500 kilometers (300 miles) north. (AP Photo/Mosa'ab Elshamy)

DAKHLA, Western Sahara (AP) — Beneath a star-packed sky in the Sahara, smugglers and handymen unearth a boat buried in the sand, a made-to-order vessel for carrying migrants from the North African coast to Spain’s Canary Islands.

With seasoned skill, the men hoist the blue-bottomed wooden boat atop a four-wheel drive vehicle that will take it from this inland hideaway to the Western Sahara shore. From there, the boat is meant to take 20 to 30 migrants into the Atlantic Ocean and across what the European Union’s border agency calls “the most dangerous migratory route in the world."

The boat handover is a crucial but little-seen piece of the migrant smuggling chain in disputed Western Sahara — a business that thrived last year, as the coronavirus pandemic plunged many Africans into poverty and, with other routes choked off, migration to the Canary Islands jumped eight-fold to the highest rates ever recorded.

Encouraged by aid from Spain and the EU, the Moroccan authorities who control Western Sahara — where some residents have long sought independence — are increasingly cracking down and thwarted a recent boat transfer witnessed by The Associated Press.

But many others succeed, as smugglers dodge police helicopter searchlights in the desert and reach fishing towns on the coast around Dakhla. The peninsula city boasts a thriving fishing port, and kitesurfing enthusiasts flock to its waters. But in recent months, its beaches have become a hot spot for smuggling networks eyeing the Canaries, 500 kilometers (300 miles) north.

Although irregular crossings to Europe dropped overall in 2020, the Canary Islands route saw a significant rise, with some 22,600 migrants arriving, making Spain the main point of entry for migrants trying to reach European shores last year, according to EU and Spanish government figures. At least 600 people died or disappeared trying to make the journey.

The resurgence of the route has been driven in part by COVID-19.

The pandemic has wiped out livelihoods across Morocco by cutting off tourism revenue and periodically shutting down local businesses. While in the past most arrivals in the Canaries were from sub-Saharan Africa, now about half are Moroccans. Boats also routinely set out from the West African shores of Guinea, Gambia and Mauritania, according to the International Organization for Migration.

A resident of Dakhla who organizes trips for migrants said economic difficulties drove him to work for a smuggling network.

“We had to make money and feed our families,” the 32-year-old told the AP on condition of anonymity because what he does is illegal.

He says he puts together one trip per week, while competitors send out up to 10 boats a night. He estimates as many as half of the migration attempts fail, either because of problems before departure or at sea.

One recent failure was visible on the shores of the Dakhla peninsula: the freshly charred remains of a migrant boat that caught fire. The fate of those aboard is unclear.

IOM’s Missing Migrants Project provisionally recorded 601 deaths or disappearances on the Canary route last year, including at least 109 who left from Dakhla or were found near Dakhla. They are still investigating another eight missing boats with 355 people aboard.

The Dakhla resident said migrants pay $2,000 for the trip — a vast sum in Morocco, where the typical worker earns a few hundred dollars a month — but wouldn't say how much he earns himself.

“I don’t know where they get the money from, but they want to leave at any cost," he said.

One recent night, a group of smugglers left Dakhla and headed inland, followed by a vehicle carrying a dozen handymen. They drove past police checkpoints then turned off the highway into the endless expanse of desert. The driver had a GPS coordinate on a phone and crossed the sand with the experience of someone who seemed to have taken the route many times.

At the meeting point, the men found a white tent and a young boat-builder — and unearthed a large boat.

Just as they prepared to head back, the smugglers received a message about police “movement” and were told to leave the boat. Within minutes, the vessel was deep beneath the sand again — and the tent and equipment gone.

As the men drove back toward town, police stopped their car and searched it for signs of smuggling — but found none.

The carpenter said he built the boat in the desert to avoid attracting attention — a common practice, though smugglers also sometimes simply buy boats from fishermen. The carpenter, who said he earns about 20,000 dirham ($2,000) per vessel, spoke on condition of anonymity because of the connection to smuggling networks.

When such boats make it to Dakhla, they find plenty of takers.

It can take up to four days to get to the Canaries, and people arrive in terrible shape. They generally don’t take food on the journey and very little water, if any, according to migration agencies.

But deterring people from taking the risk is a huge challenge in a global economic crisis. As crossings surged last year to the highest level since EU border agency began collecting data in 2009, Spain sent top government officials to Senegal and Morocco in November to discuss how to stop the crossings.

The EU provides development aid to African countries to help them manage migration and has also set up a 5 billion-euro ($6 billion) trust fund to address the problem. For its part, Moroccan police have said they prevented nearly 10,000 migrants from crossing to Europe last year, and the government agreed to take back Moroccans who are deported.

But still hundreds of people attempt the journey. Already six deaths have been recorded in 2021 on the Canary route, most recently a boy who drowned.

“It is absolutely one of the most deadly routes to the European Union," Home Affairs Commissioner Ylva Johansson told EU lawmakers Tuesday. "And we don’t know actually how many lives have been lost.”

Associated Press journalists Lorne Cook in Brussels, Renata Brito in Barcelona and Angela Charlton in Paris contributed to this report.