Bocelli: It's not a concert for coronavirus, it's a prayer 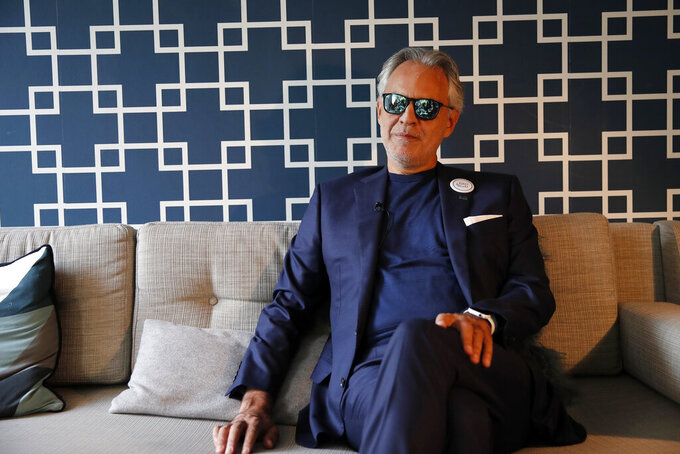 FILE - This Nov. 13, 2019 file photo shows Italian tenor Andrea Bocelli during an interview in Paris. Bocelli will sing at the Duomo of Milan on Easter Sunday sending a message of love and hope to the world during the coronavirus pandemic, but the Italian tenor says it’s not a concert. Instead, he calls it a “prayer.” (AP Photo/Francois Mori, FIle) 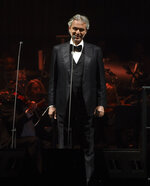 NEW YORK (AP) — Andrea Bocelli will sing at the Duomo of Milan on Easter Sunday sending a message of love and hope to the world during the coronavirus pandemic, but the Italian tenor says it’s not a concert. Instead, he calls it a “prayer.”

“I received this invitation by the mayor of Milan and by the authorities of the church and of course I answered yes. I’m very happy to do this,” he said. “Also, it’s not a performance. It’s not a concert. It’s only a prayer.”

“I will go there to pray, and I’d like to think that everyone listening to me sing can pray with me,” he said.

Accompanied by organist Emanuele Vianelli, Bocelli will sing at the historic cathedral for an audience of none because the Duomo, like most public places, are closed because of the spreading coronavirus. The performance, though, will air live on Bocelli’s YouTube channel at 1 p.m. Eastern.

He’s crafted and arranged a special set for the event, which will include holy songs like “Ave Maria” and “Sancta Maria.”

“I chose some of the most beautiful pieces of sacred artists and I will sing this kind of music,” Bocelli said in a phone interview Wednesday from his home in Forte dei Marmi, a seaside town in northern Tuscany.

In total, Italy has more than 135,00 confirmed cases and over 16,500 deaths from the COVID-19 outbreak. The European country is in its fifth week of a nationwide lockdown.

In addition to singing, the Grammy-nominated international star has been giving back and assisting communities through his The Andrea Bocelli Foundation, which started a GoFundMe fundraiser to help hospitals buy necessary equipment.

“The house is the headquarter of the foundation and we are working very hard to fulfill the goal of the foundation,” said Bocelli, who said he wanted to thank the health care workers on the front lines as well as those doing good deeds from their homes.

“We’re trying raise the money and deliver all tools needed for this crisis.”