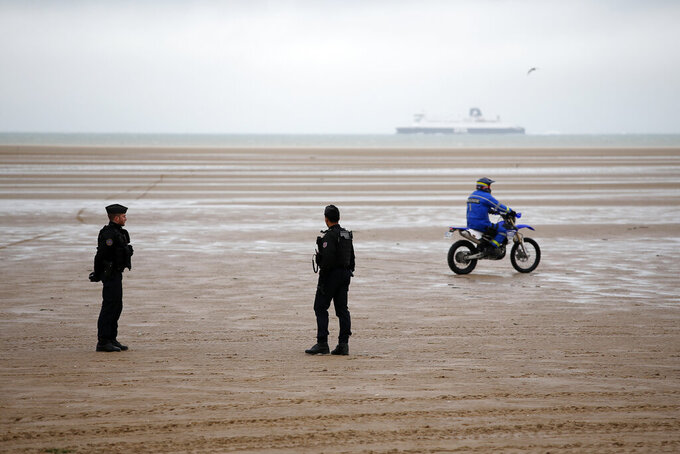 FILE - In this Jan.31, 2020 file photo, police officers patrol on the beach of Oye-Plage, northern France, near Calais. The body of a 16-year-old Sudanese migrant who apparently was trying to reach Britain by sea was found washed up on a French beach Wednesday Aug.19, 2020 in Sangatte, near Calais, authorities said. The discovery comes amid tensions between Britain and France over a rise in migrants' efforts to cross the English Channel in recent weeks. (AP Photo/Michel Spingler, File)

PARIS (AP) — The body of a 16-year-old Sudanese migrant who apparently was trying to reach Britain by sea was found washed up on a French beach Wednesday, authorities said.

The discovery comes amid tensions between Britain and France over a rise in migrants’ efforts to cross the English Channel in recent weeks.

The French government’s minister for citizenship issues, Marlene Schiappa, tweeted about the discovery of the boy's body on the beach of the English Channel coast town of Sangatte. She expressed “immense sadness” and promised a greater mobilization against "traffickers who profit from human misery.”

Police retrieved the body from the sand in Sangatte and identified the teenager through documents he had with him, according to local newspaper Voix du Nord.

British Home Secretary Priti Patel, who has vowed to curb the cross-Channel journeys, said the boy's death was “an upsetting and tragic loss of a young life.”

“This horrendous incident serves as a brutal reminder of the abhorrent criminal gangs and people smugglers who exploit vulnerable people,” Patel added. “Working together, we are determined to stop them.”

Migrants have long used northern France as a launching point to get to Britain, either in trucks through the Channel tunnel or on ferries. Some have turned to small boats organized by people smugglers because coronavirus lockdowns have reduced opportunities to stow away on ferries and trucks.

At least 650 migrants have crossed the English Channel, one of the world’s busiest waterways, in small boats so far this month, encouraged by favorable weather. More than 4,000 have made the crossing since the start of the year.

France has rescued more than 150 migrants in recent weeks. Britain's Royal Air Force has been patrolling the area, and British officials have hardened their rhetoric against asylum-seekers. But the trafficking attempts continue.

The issue has long fueled tensions between the countries, but they routinely cooperate to prevent migrants gathered around the French ports of Calais and Dunkirk from sneaking onto trains or hiding in trucks to enter Britain.

British opposition politicians and human rights groups urged the government to tone down its tough rhetoric, which has included suggestions that the Royal Navy could be deployed in the Channel.

Nick Thomas-Symonds, immigration spokesman for the main U.K. opposition Labour Party, said “the government’s response to the situation in the Channel has been lacking in compassion and competence.”

“Ministers urgently need to step up work with international partners to find a humanitarian solution to this crisis, which is costing lives,” he said.

Bella Sankey, director of support and advocacy organization Detention Action, called what happened to the 16-year-old in France "a horrifying but wholly expected death.”

“We have repeatedly warned Priti Patel it was only a matter of time before her toxic policy to deny safe and legal routes to the U.K. would cost lives,” she said.