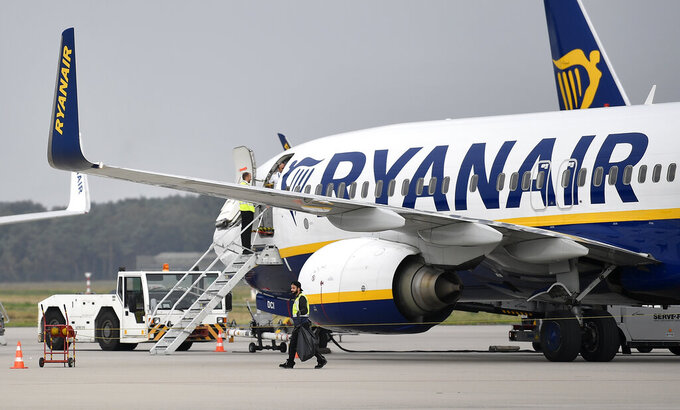 FILE - In this Sept. 12, 2018 file photo, a Ryanair plane parks at the airport in Weeze, Germany. Boeing's troubled 737 Max jet is getting a vote of confidence from Ireland's Ryanair, one of Europe's biggest budget airlines. Ryanair announced Thursday, Dec. 3, 2020, that it will order 75 more Max jets, bringing its total orders to 210. The move comes just weeks before the plane is expected to resume flying. (AP Photo/Martin Meissner, File)

Irish budget airline Ryanair said Thursday it is ordering 75 more Boeing 737 Max jets, a boost for Boeing just before its most important plane returns to flying after two deadly crashes.

The order would be worth more than $9 billion at list prices, although airlines routinely receive deep discounts. Financial terms of the deal were not disclosed.

The announcement was a huge lift for Chicago-based Boeing, which has suffered canceled orders for the plane since it was grounded nearly 21 months ago and while demand for new jets plummeted because of the coronavirus pandemic.

So far this year, customers have canceled orders for 448 Max jets and Boeing has raised doubt about another 782 orders because of the airlines’ pandemic-weakened financial health. Before Ryanair’s order, the company had reported only five Max orders in 2020.

Boeing CEO David Calhoun said he is confident that the Ryanair move is the beginning of the company's bid to rebuild its Max order book.

Airlines usually get deep discounts off list prices for planes. Calhoun dismissed the idea that Boeing may be under more pressure to cut prices because of a pandemic that is causing massive losses at its airline customers and the Max's own troubled past. The company is trying to resell planes covered by previous deals that were later canceled.

“We don't feel a need to discount our way into the marketplace,” he said.

The new deal would push Ryanair’s total orders for the Max to 210 planes. CEO Michael O’Leary said that with the additional 75 planes, Max jets will make up one-third of Ryanair’s fleet in five years, up from 6% now.

O’Leary said the planes offer lower fuel consumption and quieter flying than other aircraft. He expressed confidence that travel will recover next year as virus vaccines become widely available and that customers will get back on the Max.

“The one issue that's going to come up here today is safety, so let's get it out front,” O'Leary said on a call with reporters. “This is the most scrutinized, most audited aircraft in history. It's also going to be one of the safest.”

Max jets were grounded worldwide in March 2019 after crashes in Indonesia and Ethiopia just five months apart killed a total of 346 people. Last month the U.S. Federal Aviation Administration and regulators in Europe cleared the way for the plane's return by prescribing new flight-control software and other changes.

With its previously best-selling plane grounded, Boeing has lost $3.5 billion so far this year and announced deep jobs cuts to reduce costs. Boeing expects the pandemic to cast a pall over demand for airline jets for several years.