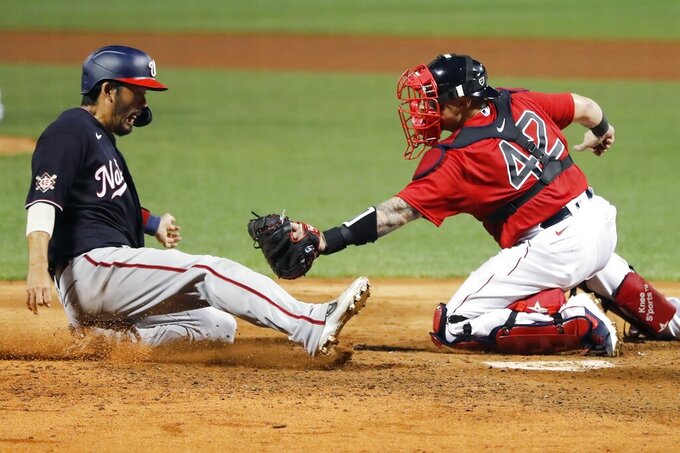 Kevin Pillar added a solo homer and triple for Boston, which had lost four of its last five.

Trea Turner went 5 for 5 with two doubles to extend his hitting streak to a career-high 14 games for the Nationals. It was his third career five-hit game after he went 3 for 5 in a series-opening win on Friday.

As the AL East-worst Red Sox approach a trade deadline that could lead to more changes, they combined decent pitching with a couple of key hits for just their 11th win in 33 games of this shortened season.

The defending World Series champion Nationals, last in the NL East, have dropped four of five.

Bogaerts homered off a back wall in deep left center in the first inning after Alex Verdugo singled and J.D. Martinez doubled off the Green Monster.

“Today we were able to get out ahead,” said Verdugo, who also threw out a runner at the plate. “Just to get the lead, it was nice.”

Pillar tripled leading off the second and scored on Jackie Bradley Jr.’s slow roller to first.

Ryan Brasier (1-0), the fifth of six relievers, was credited with the victory. Matt Barnes recorded the final three outs for his third save.

“It felt like it was a playoff game where you try to do anything you can,” Boston manager Ron Roenicke said of his bullpen moves. “The guys just kept throwing up zeros.”

Washington starter Aníbal Sánchez (1-4) labored through five-plus innings, giving up five runs on eight hits after holding the Miami Marlins to a run over seven in his last start.

The Nationals sliced it to 4-3 against starter Chris Mazza in the third, with the first run scoring when the pitcher flipped the ball from his glove over first baseman Mitch Moreland’s head trying to get an out. Howie Kendrick and Adam Eaton each had RBI singles.

“Trea found holes all day, some of these other guys hit the ball on the screws and have nothing to show for it,” Nationals manager Dave Martinez said. “We're swinging the bats well.”

Pillar homered over the Monster in the fourth, letting out a brief yell after the crack of the bat.

Making his second career start after being recalled before the game, Mazza gave up three runs in 2 1/3 innings.

“I feel like I got pitches to hit and I didn’t miss them,” Turner said.

J.D. Martinez entered the game hitting just .205 with only three homers and 15 RBIs after putting up big numbers his first two seasons with the club.

“It’s just hard because we’re just not used to seeing him doing that,” Roenicke said before the game.

Known for his extensive video work, he’s unable to retreat to the video room during games after MLB shut them down from players and coaches due to guidelines for coronavirus safety.

Kurt Suzuki extended his hitting streak to a career-best 11 games.

The Nationals signed former Boston utility player Brock Holt to a one-year contract. The 32-year-old Holt played for the Red Sox for seven years but signed a free agent deal with Milwaukee during the offseason. He was released by the Brewers this week after hitting just .100 in 16 games.

He struck out pinch hitting in the ninth after the Red Sox played his old walk-up song when he was announced.

Nationals: CF Victor Robles crashed hard into the wall, trying to make a leaping grab on Pillar’s triple, but got up quickly and retrieved the ball.

Red Sox: Placed RHP Nathan Eovaldi on the 10-day injured list with what Roenicke called a “mild strain” of his calf. Roenicke also said that Eovaldi would have a bullpen on Sunday and Wednesday and be eligible to start next Saturday.