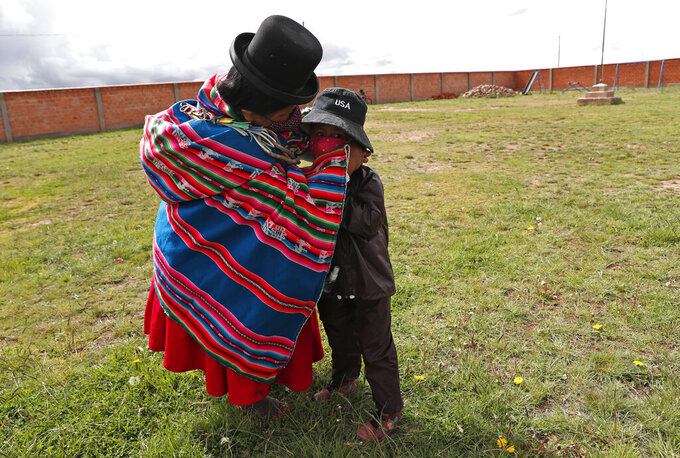 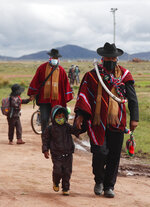 JESÚS DE MACHACA, Bolivia (AP) — In Bolivia's highlands, a dozen Aymara students on bicycles, covered from head-to-toe in protective suits, hats and face masks, arrive at their school for the start of the 2021 school year amid an uptick in coronavirus infections in the Andean country.

Bolivia shut down its school year in August because it couldn't guarantee access to online education to all, especially in impoverished rural areas where many people lack devices and internet access. Even though the infection rate remains high, the government announced that classes would re-start this week with face-to-face, online or blended formats, depending on the conditions in each region.

Parents at the Jancohaqui Tana school on the outskirts of Jesús de Machaca, located west of La Paz, together with Indigenous authorities, opted to send their children back to school for in-person classes and ordered special biosecurity suits made. Most Bolivian regions opted for virtual classes.

“I send my son to learn, but always with care so that he is not infected," Sonia Huanca, 48, told the Associated Press. “We live far away here and we don't go to the city to avoid contagion.”

Jesús de Machaca is a remote town of farmers and milk producers. The school is small with children of all grades being taught by one teacher in the same classroom.

“I bought those smartphones, but they don’t work here because there’s no signal," said Manuel Layme, who has been teaching at the Jancohaqui Tana school for two years. “There is no other way” but in-person classes.

Besides in-person, classes are also being taught in Bolivia on television, radio and a free digital platform.

Layme said he was happy with the plan and that on his days off he will not go to the city to risk catching the coronavirus and bringing it back to the school.

Others are not so happy with some students returning to face-to-face classes.

Leaders of the teachers in this rural area say the conditions are not right for a return to classes.

“The state is putting the student population at risk by allowing students back in the classrooms,” said regional leader Andrés Huayta.

In Bolivia, the pandemic has mainly affected the most populated cities of Santa Cruz, La Paz and Cochabamba. The Ministry of Health reported that in January there were more than 60 deaths per day and Bolivia reported 2,021 new infections on the eve of the school opening, one of the highest figures since the pandemic began.