As Bolton speaks, Congress shrugs and points to election 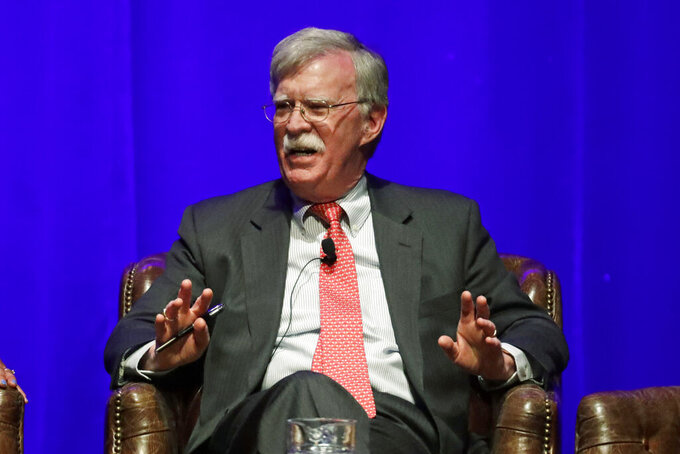 FILE - In this Wednesday, Feb. 19, 2020, file photo, former national security adviser John Bolton takes part in a discussion on global leadership at Vanderbilt University, in Nashville, Tenn. Bolton’s book “What Happened In the Room,” has been delayed from May 12 to June 23 according to listings from Wednesday, April 29, 2020, on the website of publisher Simon & Schuster and booksellers like Amazon and Barnes & Noble. (AP Photo/Mark Humphrey, File)

That's despite the stunning allegations the former national security adviser leveled against his former boss, President Donald Trump, in a new book detailing Bolton's 17 months in the White House. Bolton wrote that Trump “pleaded” with China’s Xi Jinping during a 2019 summit to help his reelection prospects and engaged in a pattern that resembled “obstruction of justice as a way of life.”

Trump denounced the book from Bolton, known as a prodigious note taker, as “a compilation of lies and made up stories.”

As shocking as the allegations are, Bolton is making them with impeachment in the rearview mirror, amid a pandemic and widespread racial tensions and less than five months before Election Day. Lawmakers of both parties agreed that Bolton's relevance to any congressional probe of Trump has passed.

“I’m not paying any money for a book that was a substitute for testifying before Congress,” House Speaker Nancy Pelosi told reporters. “President Trump is clearly ethically unfit and intellectually unprepared to be the president of the United States. That doesn’t seem to matter to Republicans in the United States Senate.”

“It’s not going to make any difference at this point. We've got an election in 4 1/2 months,” said Sen. Mike Braun, R-Ind. “I think there are a lot more important issues: police reform and maybe get back to some of the stuff we were doing even before impeachment, like reforming health care.”

Bolton's book is a familiar story to members of Congress. The House impeached and the Senate acquitted Trump on abuse and obstruction charges stemming from his pressure on Ukraine's president for political help.

Six months ago, Democrats were clamoring to hear what Bolton had to say, but he refused to testify.

Now that Bolton has spoken, Democrats stopped short of saying they would compel him to testify or take any other action months before an election certain to turn on the virus and race crises roiling the country.

Pelosi said “it’s not necessarily about whether we subpoena” Bolton. House Intelligence Committee Chairman Adam Schiff, D-Calif., who led the House investigation and Senate prosecution, said that his committee “will continue to hold Trump accountable” but that he's talking with Pelosi about next steps.

Asked whether Bolton should be invited to testify, Sen. Mark Warner, the ranking Democrat on the intelligence committee, said only that he and chairman Marco Rubio are “talking regularly.”

But Rubio, R-Fla., said the election is now the right place for Trump's fate to be decided. He said that had the Senate called Bolton during the impeachment trial earlier this year, “we might still be in court right now, in the middle of a pandemic and everything else that’s going on.”

Democrats acknowledged that the book was unlikely to move any Republican senators, most of whom have shied away from criticizing Trump.

Republicans, eyeing their own political prospects and the pushback-loving leader of their party, would say little about it.

"I’m not getting in the middle of that food fight,” said Sen. Ron Johnson, R-Wis., a frequent Trump ally.

“I don’t have anything to say about it," said Sen. John Cornyn, R-Texas.

Idaho Sen. James Risch, the chairman of the Senate Foreign Relations Committee, told reporters that “I’m not doing any interviews on John Bolton."

Sen. Todd Young, R-Ind., grew frustrated when asked about Bolton, saying three times that he would be saying "nothing else” on the book until he was given clarity on whether it contained classified information, as the White House has asserted.

David Perdue of Georgia and Susan Collins of Maine also declined to comment.

Those who did comment had no interest in revisiting the past.

“Anybody who claims to have witnessed treason and obstruction of justice and tells about it in a book?” said Sen. Lindsey Graham, R-S.C. "Most Democrats are going to have a hard time building a case around Bolton. They know that.”

Sen. Lisa Murkowski, R-Alaska, has said she is struggling with how to speak about Trump's handling of the virus and racial tension stemming from the police killing of George Floyd in Minneapolis. But she said Thursday she has no regrets for voting against calling witnesses such as Bolton.

“There’s no going back,” she said. “I don’t regret that decision.”