With boost from Donaldson, Twins boldly aim for World Series 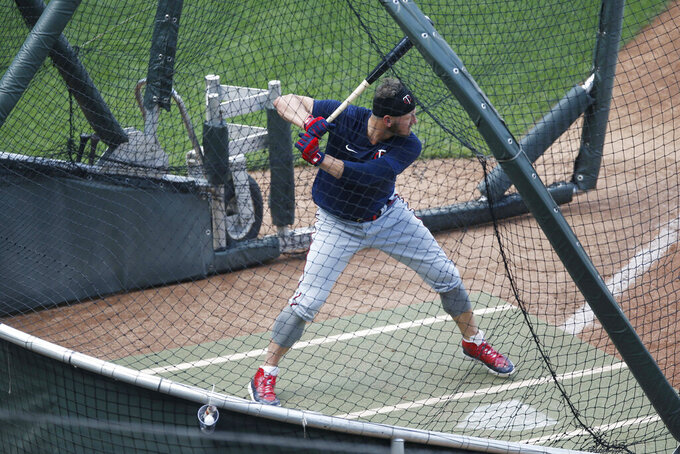 MINNEAPOLIS (AP) — When Rocco Baldelli delivered his first formal address of the 2020 season to his players, the Minnesota Twins manager was unafraid to mention the World Series.

Baseball's ultimate prize did not receive a reference in Baldelli's revised speech earlier this month.

“That's something that is in everyone's head,” said Baldelli, who won the American League Manager of the Year award as a rookie skipper in 2019 after the Twins won the AL Central at 101-61. “That's probably something you have to hear once, and then you don't have to talk about it anymore.”

The message this time, when the Twins gathered at Target Field nearly four months after the virus outbreak halted spring training and diced up the schedule, centered on accountability and respect.

Valuing the whole over the sum of the parts has long been a driver of team success, but in this summer of the sequester, taking care of one another has taken on additional meaning: germs. Slowing their spread and minimizing exposure will go a long way toward keeping the club in championship contention for the 60-game sprint and subsequent playoffs, let alone ensuring the sport can continue to play at all.

“It’s really going to show on the field because you’re not playing for fans in the stands. You’re really just playing for your team, the guys on the field,” right fielder Max Kepler said. “It’s going to be a different ballgame, but I think we have a great group of guys and everyone’s holding together, and if we see one guy down, we’re here to pick him up. Like I said, it’s going to be weird, but we’ll make some adjustments and hopefully everything will go smoothly.”

All the way through October? They're built that well, at least, boosted by the high-impact winter additions of third baseman Josh Donaldson and starting pitcher Kenta Maeda.

“I absolutely think this is a World Series team. We felt that before and we don’t feel any different about that today,” president of baseball operations Derek Falvey said last week. “I think these guys are hungry for that.”

Here are some key angles to follow for the Twins during this most unusual season:

Donaldson and his four-year, $92 million contract has shifted slugger Miguel Sanó to first base, assuming he's healthy. Sanó missed the start of summer camp after testing positive for COVID-19 upon his arrival from the Dominican Republic.

The pitching staff underwent a more significant shuffle, with Maeda fetched in a trade and fellow veterans Rich Hill and Homer Bailey signed as bargain-rate free agents. Tyler Clippard was brought in to enhance the bullpen. Hill, Clippard, Bailey and Maeda have an average age of 35, with 53 combined postseason appearances, the type of experience that could pay off even more than usual with such an abbreviated schedule.

Michael Pineda has 36 games left to serve on his suspension for using a banned weight loss drug, so there's room for a rookie like Randy Dobnak or Devin Smeltzer to crack the rotation. Both of them flashed potential in brief auditions down the stretch last season. The organization's best prospects are in the outfield, where Alex Kirilloff, Brent Rooker and Trevor Larnach — all of whom were in the 60-player training pool and eligible for the taxi squad — are waiting in the wings in case of injuries or quarantines.

Donaldson hit 37 home runs for Atlanta last season, the third time in the last five years he's reached that mark, so his insertion at the heart of the batting order ought to make the Twins even more powerful after setting the all-time major league record with 307 homers in 2019.

“I know we have a two-month season, but I think if we had a chance to play a full season we’d break the record we set last year,” said Kepler, one of five players who topped 30 homers last season.

The Twins have the easiest schedule in the majors, based on opponent winning percentage in 2019. Two-thirds of their games are against the AL Central, which had two 100-loss teams last year in Kansas City and Detroit. They caught another break, with seven of their 10 contests against primary division competitor Cleveland at home.

The Twins were 40-20 through 60 games last season, a blueprint for starting strong that will be vital this summer.

“The best teams will win their games, and throughout the course of 60 games they’ll come out on top of their divisions or whatever you want to call it,” catcher Mitch Garver said. “But I also think that the team that gets the luckiest is the team that’s going to prevail.”