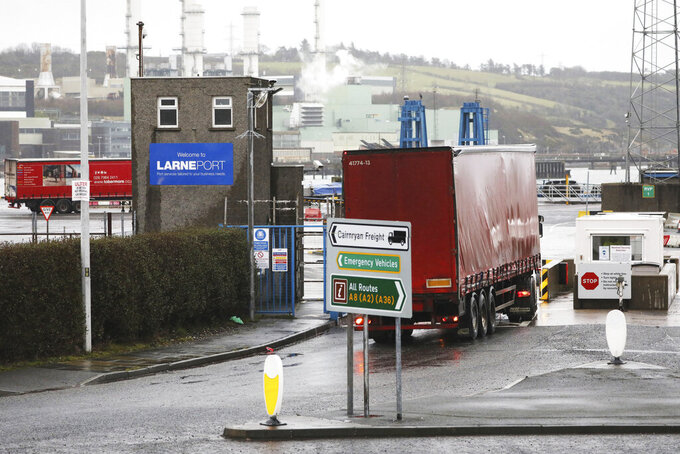 LONDON (AP) — Politicians in Britain, Northern Ireland and the European Union on Tuesday condemned threats against border staff that prompted authorities to suspend checks at ports and underscored the tremors Brexit has sent through Northern Ireland's peace process.

Local mayor Peter Johnston said there had been “deeply troubling graffiti and a very notable upping of community tensions.”

Since the U.K. left the European Union’s economic structures at the end of 2020, customs and veterinary checks have been imposed on goods moving between Britain and the bloc. Under the U.K.-EU divorce terms there are also new paperwork and checks for some British goods going to Northern Ireland, because it shares a border with EU member Ireland.

That decision is opposed by pro-British Unionist politicians, who say it amounts to a border in the Irish Sea between Northern Ireland and the rest of the U.K. Police have warned that violent pro-British Loyalist groups could capitalize on the tensions.

Mark McEwan, assistant chief constable of the Police Service of Northern Ireland, said there was no evidence that outlawed paramilitary groups were behind the threats.

"We are concerned about the actions of a number of individuals and small groups,” he said. “We don’t believe that those actions are organized. But they do give us cause for concern.”

Politicians from all parties in Northern Ireland’s power-sharing government condemned the intimidation.

“There is no place in society for intimidation and threats against anyone going to their place of work,” the power-sharing Executive said in a statement.

“Those who thought they could impose something against the will of every unionist are now reaping the seeds of division they have sown,” he said.

The sensitivity of Northern Ireland’s status was underscored last week, when the EU threatened to ban shipments of coronavirus vaccines to Northern Ireland as part of moves to shore up the bloc’s supply. That would have drawn a hard border on the island of Ireland — exactly the scenario the Brexit deal was crafted to avoid.

British, Irish and Northern Ireland politicians all expressed alarm at the plan, and the EU dropped the idea.

Michael Gove, the British Cabinet minister in charge of post-Brexit arrangements, said “trust has been eroded” by the EU’s actions over vaccines. He also said problems in shipping some goods to Northern Ireland caused by the new trade rules needed to be resolved.

“The EU needs to work with us at speed and with determination to resolve a series of outstanding issues with the (Northern Ireland) protocol,” Gove told lawmakers in the House of Commons.

“It is vital that everyone in Northern Ireland, and indeed in the U.K., exercises calmness and moderation as well as resolution in seeking to resolve the problems,” he said.

European Commission spokesman Eric Mamer condemned the threats of violence and stressed that “the situation has actually arisen some time ago,” before the EU’s moves over vaccines. He said senior politicians from the U.K., Northern Ireland and the bloc would discuss the ports situation on Wednesday.

Mamer said EU staff overseeing border checks in Northern Ireland had been told to stay away from work on Tuesday, “and we will continue to monitor the situation and adapt accordingly.”

Samuel Petrequin in Brussels contributed to this story.