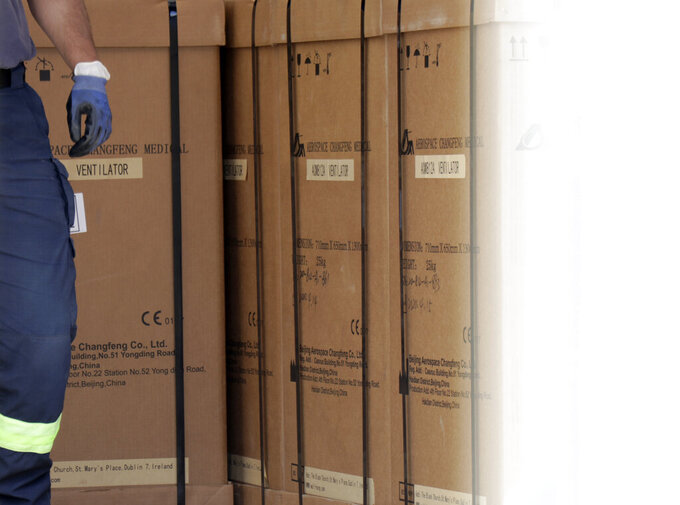 Civil protection workers move boxes of ventilators at the customs post in the Bosnia capital Sarajevo, Thursday, April 30, 2020. In their initial report, the Bosnian state prosecutors said in a statement released Monday May 11, 2020, that the ventilators imported from China by private company Silver Raspberry, and paid for by the country’s government, have been found to be useless for COVID-19 coronavirus patients. (AP Photo)

SARAJEVO, Bosnia-Herzegovina (AP) — Bosnian authorities have arrested two high-ranking state officials and the owner of a private company which imported 100 ventilators from China that were found to be useless for COVID-19 patients.

Bosnia’s state prosecutors said Friday that the arrested men include the prime minister of Bosnia’s Muslim-Croat federation, Fadil Novalic, a top state civil protection official, and the owner of the fruit processing company that received about 5 million euros ($5.5 million) from the government to get the equipment.

The three are being investigated for alleged money laundering, fraud, embezzlement of state funds and other crimes, the prosecutors said. They were detained for questioning late Thursday, kept overnight and then sent to prison.

The investigation was opened in March after a public outcry over why Silver Raspberry, the little-known company with ties to Bosnia’s political establishment, was granted the lucrative ventilator deal.

Prosecutors said in their initial report that the imported breathing machines “do not meet even a minimum of necessary characteristics for adequate treatment” of coronavirus patients.

The company owner has rejected accusations that he imported the ventilators at highly inflated prices. He said he used his business connections in China to accomplish what he called a “humanitarian mission.”

The chairman of Bosnia's three-member presidency, Sefik Dzaferovic, said if the alleged crimes can be substantiated with evidence “this can be very dangerous for our country."

“That’s why the prosecution and SIPA (the state investigation agency) have to come out with concrete evidence, as soon as possible," he said.

The allegations have come as no surprise in Bosnia, which is ranked poorly on Transparency International’s annual global corruption list. The watchdog group last year placed Bosnia 101st out of 180 countries.

Bosnia, which went through a bloody civil war in the 1990s, is composed of the Muslim-Croat federation and a Serb entity.

Experts have warned that the COVID-19 pandemic, which caught officials in many countries unprepared and ill-equipped to meet the need for protective gear and ventilators, created opportunities for graft as governments rushed to secure supplies.