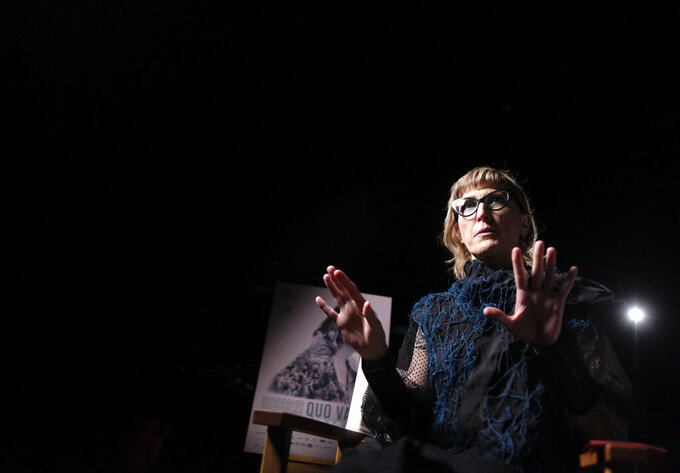 Bosnian filmmaker Jasmila Zbanic speaks and gestures during an interview with the Associated Press in the capital Sarajevo, Bosnia, Saturday, Jan. 30, 2021. Zbanic's latest and the most ambitious film "Quo Vadis, Aida?", based on true events from Bosnia's brutal 1992-95 inter-ethnic war has been many years in the making. (AP Photo/Kemal Softic) 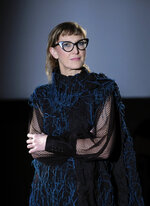 As an independent filmmaker from a country without an established film industry, Bosnia's Jasmila Zbanic said she is used to improvising. That's come in handy this past year, when she was finishing up her latest and most ambitious film, “Quo Vadis, Aida?”, during the pandemic.

The film, which has no promotional budget, has generated Oscar buzz anyhow. The Hollywood Reporter described it as “terrifically harrowing” and “impossible to forget.”

“I think we are managing (well),” the 46-year-old writer-director declared confidently in an interview with The Associated Press, and then broke into a grin. “Of course, we will know if I am right or completely wrong” on Feb. 9, when the shortlist of 15 films vying for nominations in the international feature film Oscar category will be announced.

Based on true events from Bosnia’s brutal 1992-95 inter-ethnic war, “Quo Vadis, Aida?” (Latin for “Where are you going, Aida?”) has been many years in the making. Its central character, Aida, is a United Nations translator who tries to save her husband and sons during the July 1995 massacre in Srebrenica.

The slaughter of over 8,000 men and boys in and around the eastern Bosnian town was the culmination of the war, which pitted the country’s three main ethnic factions — Serbs, Croats and Bosnian Muslims — against each other after the breakup of Yugoslavia.

Zbanic spent over a decade researching and writing the script, and then assembled a coalition of independent co-producers, cast and crew from nine European nations. The film is the most expensive ever shot in post-war Bosnia. But while the Balkan country submitted it for Oscar consideration, the government covered only around 10% of its 4.5 million euro budget (around $5.4 million).

A member of the post-war generation of independent Bosnian filmmakers, Zbanic has gained recognition outside her homeland for her minimalist films. And she is used to having to work to find funding and collaborators abroad.

But “Quo Vadis, Aida?” completed in Bosnia in the summer of 2019, was her first experience directing such a large cast and crew: nearly 300, as well as thousands of extras. Zbanic said she expected post-production to be significantly less challenging, and was looking forward to beginning it last March. Then the coronavirus pandemic shut the world down.

Under lockdowns and scattered over five different European countries, Zbanic and her post-production team suffered a four-month delay. By July, they got back to work and put the film together, communicating remotely.

Despite the obstacles, Zbanic completed the film in time for its Sept. 3 premiere at the Venice Film Festival – the first such international event to go ahead with live audiences since the pandemic shut much of the movie industry down in spring 2020.

“Everybody who arrived at the festival, they were so excited and so happy to have human beings around them, to be able to watch films together” after spending months in isolation, Zbanic said.

After Venice, Zbanic returned to Bosnia, but “Quo Vadis, Aida?” continued to make the rounds on the international film circuit.

The pandemic pushed most major international film festivals online, and Zbanic said she has a feeling that, unlike herself, her film “is traveling and communicating with the audience as if everything were normal."

“People still watch it and have a need to share their feedback and to connect with me and to talk about future (joint) projects,” she said.

In fact, she said, because of the pandemic, “people could identify with the film more easily ... because (it) shows what comes at the end if we are not capable of keeping our institutions and keeping human rights in the center” of attention.

In 2006, Zbanic’s debut feature, “Grbavica: The Land of My Dreams,” won the Berlinale's Golden Bear award and was submitted by Bosnia for the Oscar, but was not shortlisted. This time, she hopes to at least be nominated, if not repeat the success of fellow Bosnian filmmaker Danis Tanovic, who won the Academy Award in 2001 for his first feature film, “No Man’s Land.”