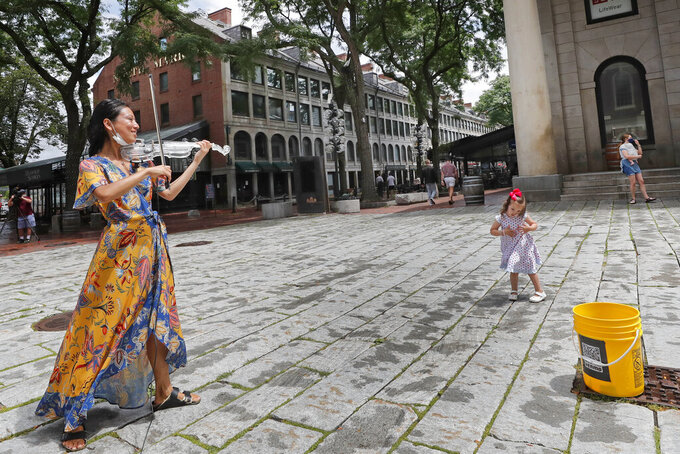 Violin Viiv performs as 3-year-old Nola Davidson dances at Faneuil Hall Marketplace, one of Boston's most popular tourist destinations, as it reopens to the public, Wednesday, July 1, 2020, in Boston. The market, which includes several buildings of retail outlets and restaurants and lined with cobblestone walkways, was closed in March because of the coronavirus pandemic. (AP Photo/Elise Amendola)

BOSTON (AP) — Faneuil Hall Marketplace, one of Boston's most popular tourist destinations, reopened to the public Wednesday with a pair of special performances by the facility's favorite street musicians.

The market, which includes several buildings of retail outlets and restaurants and lined with cobblestone walkways, was closed in March because of the coronavirus pandemic.

The reopening includes the Quincy Market, with its large variety of food options to satisfy any taste, and dozens of pushcart merchants selling gifts, souvenirs, T-shirts and other items.

Massachusetts health officials reported another 28 confirmed COVID-19-related deaths in the state Wednesday, bringing the total number of confirmed and presumed deaths to 8,081.

The number of people hospitalized with COVID-19 rose to 760 compared to the 733 reported Tuesday.

The number of COVID-19 patients in intensive care crept up to 123 on Wednesday compared to the 120 reported Tuesday.

The number of probable and confirmed COVID-19 deaths at long-term care homes rose to 5,127, or more than 63% of all deaths in Massachusetts attributed to the disease.

A bill filed this week at the Massachusetts Statehouse would require that a ban on evictions and foreclosures be extended for more than a year as part of the state’s ongoing response to the pandemic.

Supporters of the bill say they fear thousands of Massachusetts residents -- including those who have lost jobs and other sources of income in recent months -- could also face the loss of their homes when an existing moratorium ends next month.

The bill would bar most evictions and moratoriums until a year after Gov. Charlie Baker lifts the state’s public health emergency. It would also freeze rents during the same period and create a fund to aid property owners and landlords with 15 or fewer units.

On Tuesday, Baker announced a new $20 million fund to help low-income households having trouble making rent and mortgage payments during the state of emergency put in place to curb the spread of COVID-19.

The new program will provide up to $4,000 to pay rent or mortgage payments in arrears going back to payments due April 1.

SELECTMEN vs. BOARD OF HEALTH

Elected leaders in the small town of North Brookfield have postponed a July 4 celebration because of what it called “hypocritical” and “unconstitutional" opposition from the town's Board of Health over coronavirus concerns.

The three-member Board of Selectmen planned the Independence Day celebration — which included a parade, events for children and a nighttime laser show — after a Black Lives Matter event was held in the town of fewer than 5,000 residents.

The selectmen in a statement Tuesday said they expected about 250 town residents to attend, but the media attention created by the three-member health board's opposition created the potential for thousands of attendees, making social distancing impossible on the 4.2-acre town common.

“For overtly hypocritical and purely political reasons, the BOH opposed this small event as a serious public health threat," the selectmen said.

Despite a statewide ban on large gatherings because of the pandemic, selectmen argued their event was allowed under an exemption for political expression.

“The Board of Selectmen are cognizant of the incendiary times in which we are living and unlike the members of the Board of Health who seem arbitrarily concerned with public health only when it fits their political ideology, we will not expose our residents to the public health and public safety risks artificially created by the BOH’s unconstitutional silencing of the free expression of their neighbors," the statement said.

The Board of Health in a statement posted on its Facebook page said it was “very happy" with the postponement and denied that's its opposition to the event was political.

Sixteen people in town have tested positive for COVID-19, according to state statistics.

The Massachusetts state bar exam will be conducted remotely this year, the justices of the Supreme Judicial Court announced Wednesday.

The justices cited seating limitations and safety concerns amid the ongoing coronavirus pandemic for their decision to cancel the in-person Massachusetts administration of the Uniform Bar Examination originally planned for Sept. 30 and Oct. 1.

The remotely administered bar exam will be offered instead on Oct. 5-6.

The exam will cover the same substantive content and follow the same format. It will be administered in four 90-minute sessions over the two days.