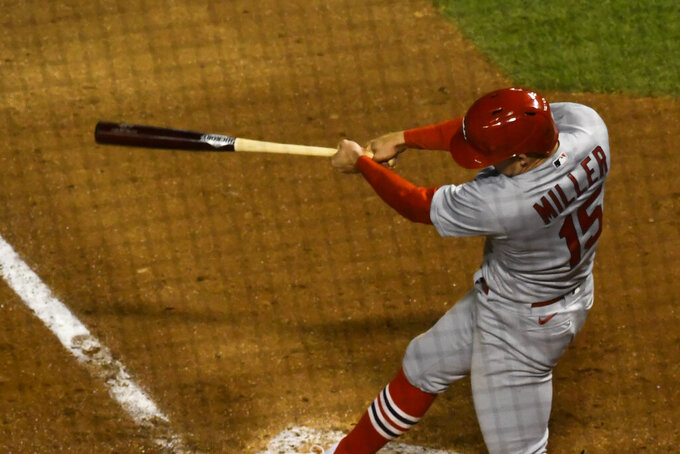 St. Louis Cardinals' Brad Miller (15) hits a home run during the fourth inning of Game 2 of a baseball doubleheader against the Chicago Cubs, Monday, Aug. 17, 2020, in Chicago. (AP Photo/Matt Marton)

CHICAGO (AP) — David Bote watched as his pinch-hit drive soared into the night. The rest of the Chicago Cubs started to celebrate as he rounded the bases.

There was only one thing missing — a roar from the crowd. Wrigley Field was empty once again.

“Something you miss, definitely," Bote said. "But again, this is a good win.”

Bote hit a three-run homer in Chicago's four-run sixth inning, and the Cubs beat the St. Louis Cardinals 5-4 on Monday for a doubleheader split.

With two outs and runners on the corners, Bote put Chicago ahead to stay with a massive drive to center off Tyler Webb (0-1) for his second career pinch-hit homer. Bote belted a game-ending grand slam for his first pinch-hit shot in a 4-3 win against Washington on Aug. 12, 2018.

Chicago was still searching for its first hit before Willson Contreras hit an RBI double off Webb (0-1) earlier in the inning, setting the stage for Bote's third homer of the season.

“Webby is going to be fine,” St. Louis manager Mike Shildt said. “Everybody has a day or two. It’s a hard game. He’ll be fine. We’ll run him back out there. He’s going to get a lot of big outs for us this year.”

St. Louis wasted a big performance by Brad Miller, who homered twice and drove in three runs. Miller also had a big swing in Game 1, hitting a tiebreaking two-run double in the seventh in the Cardinals' 3-1 victory.

Dexter Fowler connected for St. Louis in the opener of an unusual five-game series, and Max Schrock hit his first career homer in Game 2.

The NL Central-leading Cubs stopped a four-game slide. Duane Underwood Jr. (1-0) pitched 1 1/3 scoreless innings for his first major league win, and Jeremy Jeffress got three outs for his second save.

“Underwood, I can't overstate what he meant to us tonight and those innings he gave us,” manager David Ross said.

The Cardinals dropped to 3-2 since returning from a coronavirus outbreak that derailed their season, leaving them idle for weeks and resulting in 18 confirmed cases in the organization. They swept a doubleheader against the White Sox on Saturday before dropping the series finale Sunday.

The reigning division champions had a three-game series against the Cubs postponed while they waited for clearance to play again — leading to the five-game set that includes two doubleheaders and two “home” games for the Cards.

The opener was tied at 1 when St. Louis loaded the bases with none out in the seventh against Kyle Hendricks. After Dylan Carlson bounced into a forceout at home, Hendricks (3-2) was replaced by Rowan Wick.

Miller then hit a liner toward the gap in left-center. Center fielder Albert Almora Jr. made a leaping try, but it landed out of his reach on the warning track. Tyler O'Neill and Matt Carpenter scored before Carlson was thrown out at the plate.

Giovanny Gallegos (1-0) pitched a scoreless inning for the win, and Andrew Miller got three outs for his second save.

Ian Happ homered for Chicago, and Hendricks was charged with three runs and three hits.

Happ was a late addition to the Game 1 lineup after right fielder Steven Souza Jr. was scratched with right hamstring tightness.

Kwang Hyun Kim pitched 3 2/3 innings of three-hit ball in his first start for St. Louis. He signed an $8 million, two-year contract with the Cards in December.

He wore the wrong cap in the first inning, but got the right one on in time for the second.

“One of my trainers came to me and didn't say anything, but he just gave me a new cap. He put the new cap next to me,” Kim said through a translator. “At first, I was like puzzled, but then I realized the mistake.”

Cardinals: RHP Carlos Martínez and INF Edmundo Sosa have been cleared to begin baseball activities. Sosa tested positive for the coronavirus, and Martínez was placed on the injured list for an unspecified reason. Shildt said the team has “multiple players” pending review by Major League Baseball, including C Yadier Molina and INF Paul DeJong. ... LHP Austin Gomber “will be activated soon, with an eye toward” Wednesday's doubleheader, Shildt said. Gomber has not tested positive for COVID-19, but he was placed on the injured list because of a potential concern in contact tracing.

Cubs: LHP José Quintana (thumb surgery) threw 61 pitches over four innings in a simulated game Sunday. Ross said the team is finalizing the day for Quintana's next sim game. ... RHP Adbert Alzolay was in the mix for Game 2 of the doubleheader before he took a ball off his forearm a few days ago at the team's alternate training site in South Bend, Indiana. He could start one of the games in Wednesday's doubleheader.