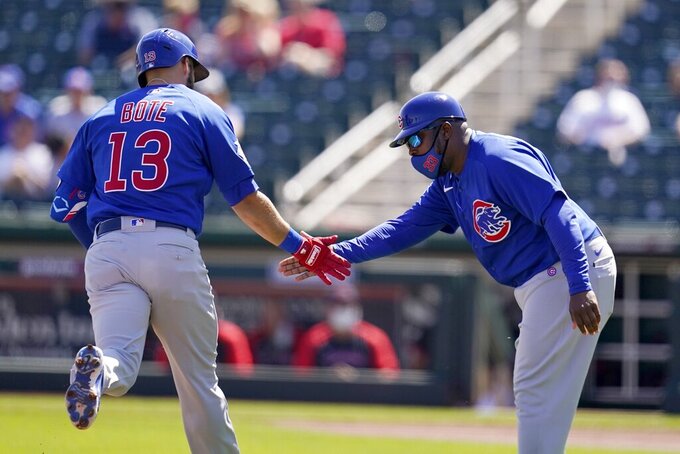 MESA, Ariz. (AP) — David Bote has won the second-base job with the Chicago Cubs, and Trevor Williams and Adbert Alzolay will round out the team's pitching rotation at the beginning of the season.

The Cubs cleared the way for Bote when they optioned infielder Nico Hoerner to Triple-A Iowa on Saturday. Bote, Hoerner and Eric Sogard had been in the mix at second, and manager David Ross said Bote was the choice.

“Every second baseman, really, that we brought in camp had a great spring,” Ross said. “I think it's an opportunity for David that David has earned, he deserves. I think it's a chance to play every day at second base."

Bote, who turns 28 on April 7, batted .200 with seven homers and 29 RBIs during the pandemic-shortened season last year. He was selected by Chicago in the 18th round of the 2012 amateur draft.

The 34-year-old Sogard is in camp on a minor league deal, but he has been told he will be added to the big league roster.

Hoerner, a first-round pick in the 2018 amateur draft out of Stanford, had a strong spring, batting .361 with a homer and six RBIs heading into Saturday night's exhibition game against Cincinnati.

The Cubs could delay Hoerner's eligibility for salary arbitration until after the 2023 season if they keep him in the minors for 30 to 50 days, unless there are changes in the next collective bargaining agreement. He batted .222 with no homers and 13 RBIs last year.

“I think there's a lot of confidence in this organization about him,” Ross said. “But I don't think it, one, is fair for him to come off the bench and get stale and have sporadic at-bats. That's not setting him up for success. And I think David Bote earned the job.”

The 30-year-old Miller had pushed for a spot on Chicago's staff, either as a starter or a swingman out of the bullpen. He allowed one earned run in his first nine innings this spring, striking out 12.

“I think Shelby's going to contribute to our team,” Ross said. “I mean I have no doubt about that.”

The Cubs have Kyle Hendricks, Jake Arrieta and Zach Davies at the top of their rotation, and Ross said Williams and Alzolay also will start. Alec Mills, who threw a no-hitter last year at Milwaukee, will work out of the bullpen for the reigning NL Central champions.

Williams, who signed a $2.5 million, one-year deal with Chicago in free agency, is looking to rebound after he went 2-8 with a 6.18 ERA in 11 starts with Pittsburgh last year. Alzolay, a rookie right-hander, had a 1-1 record and a 2.95 ERA in six appearances with the Cubs last season.

The moves reduced the Cubs' spring roster to 31 players.