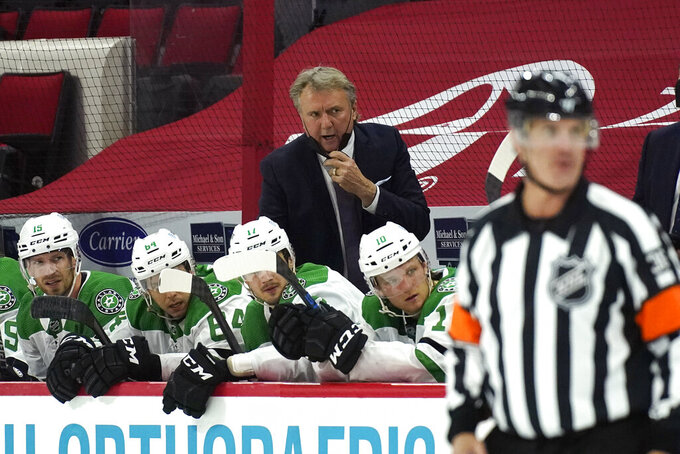 RALEIGH, N.C. (AP) — Dallas Stars coach Rick Bowness was pulled from behind the bench after two periods of the team’s game Sunday night against the Carolina Hurricanes because of NHL COVID protocol.

General manager Jim Nill said the 66-year-old Bowness is fully vaccinated, has no symptoms and the team believes it was a false positive test result for the virus.

"He was a very low grade, but it is still positive," Nill said. "Out of safety concerns, he was pulled. But yes he has been vaccinated. His first vaccination was back sometime in January. He’s had both vaccinations.”

Nill said the team was in contact with the league office and that each side agreed to take Bowness out of the game as a precaution. Bowness is the league's oldest coach.

“Everybody decided this was the right situation because of Rick’s situation, that he is a low risk, and because of the grade of the test,” Nill said.

Nill said the team got PCR COVID-19 tests back earlier than expected, leading to this move, and that no other Stars staff member tested positive. Assistant John Stevens took over head coaching responsibilities for the remainder of the game.

“I know the Dallas Mavericks had this same situation with Rick Carlisle and there’s numerous other people this has happened to,” Nill said.

Stars goaltender Anton Khudobin, who led them to the Stanley Cup Final in the Edmonton bubble last year, was in league protocol with what the team also believes was a false positive.

“He came back negative, so same situation," Nill said. "He was a real weak positive test and went through his two protocol and he had two negatives and he is now cleared to travel with the team.”