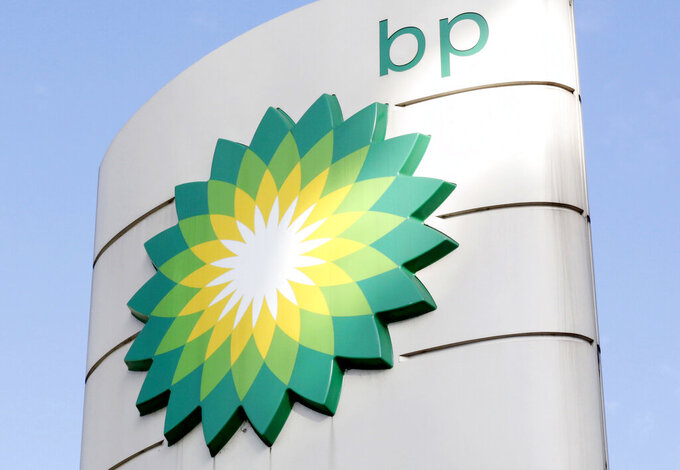 FILE - This Tuesday, Aug. 1, 2017 file photo shows the BP logo at a petrol station in London. Energy company BP is writing off as much as $17.5 billion from its oil and gas assets and will review its plans to develop oil wells as the COVID-19 pandemic accelerates its goal of decreasing its reliance on fossil fuels. (AP Photo/Caroline Spiezio, File)

LONDON (AP) — BP says it will cut the value of its oil and gas assets by as much as $17.5 billion and review plans for some oil wells as the COVID-19 pandemic reduces demand for oil and gas and forces major energy companies to speed up the shift away from fossil fuels.

The London-based company said Monday it was taking the steps because demand for energy is likely to remain weaker for “a sustained period” as countries respond to the shock of the pandemic by accelerating efforts to reduce carbon emissions.

As a result, BP cut its long-term forecast for Brent crude, a benchmark for world oil prices, to about $55 a barrel from $70. Brent oil traded for about $39 a barrel on Monday.

“All that will result in a significant charge in our upcoming results,″ Chief Executive Bernard Looney said in a statement. ``But I am confident that these difficult decisions – rooted in our net-zero ambition and reaffirmed by the pandemic – will better enable us to compete through the energy transition.”

BP in February pledged to become a ``net-zero″ company by 2050, meaning it will eliminate or offset all carbon emissions from its operations and products by that date. But oil companies are being forced to move faster than planned because the pandemic is already squeezing the profits they are counting on to finance the transition.

BP said the actions announced Monday would result in after-tax impairment charges and write-offs of between $13 billion and $17.5 billion when the company reports second-quarter earnings.

The structural shift in the energy industry combined with unusually high oil and gas supplies to create a perfect storm on global energy markets at the start of the coronavirus outbreak. With storage facilities filling up and demand plunging as economies were locked down, the U.S. price of oil went below zero in April for the first time ever. Only a week ago BP announced it would cut 10,000 jobs to reduce costs and adapt to lower prices and plummeting global demand.

Monday’s announcement makes clear that the pandemic has hastened the move away from fossil fuels.

“This is the energy transition happening,″ said David Elmes, an energy expert at Warwick Business School in northern England. ”The question is who can do it and how fast they can do it.″

Other companies are looking at doing the same - if they have the time and money to change, Elmes said. He cited the example of Orsted, a Danish company that sold off its oil and gas business in 2017 to focus entirely on offshore wind farms and other forms of renewable energy.

“Other European firms like Shell, Total and Repsol have declared similar ambitions to BP,″ Elmes said. ”But low prices mean many are struggling.″

Shell in April said it was cutting quarterly dividend payments to 16 cents a share from 47 cents because of a ``prolonged period of economic uncertainty,″ lower commodity prices and uncertain demand.

“Something like this has been long overdue from BP,″ said Michael Hewson, an analyst at CMC Markets, arguing that BP’s dividend is unsustainable. “Having seen its sector peer Royal Dutch Shell bite the bullet and cut its dividend a few weeks ago, it would appear that BP is likely to have to follow suit, if it wants to reduce its already high debt levels and shore up its balance sheet for the new challenges ahead.″