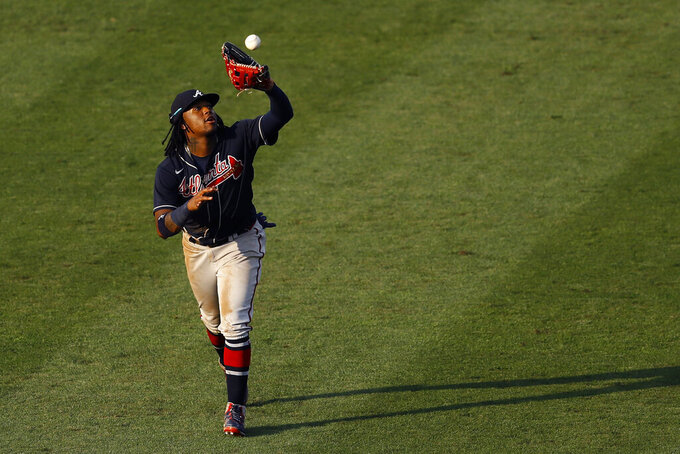 The Braves added the 22-year-old right-hander in hopes of bolstering a rotation that has struggled to find any consistency beyond top starter Max Fried.

The third overall pick in the 2016 draft, the anticipation for Anderson's arrival in Atlanta grew as he made a rapid rise through the farm system.

“He's a kid who's confident in his abilities," manager Brian Snitker said. "He's been throwing really well at the alternate site. He's excited. Hopefully this is the beginning of a long big league career for this young man.”

Moving up to Triple-A Gwinnett late last season, Anderson struggled a bit in five starts. He went 1-2 with a 6.57 ERA, surrendering five homers in 24 2/3 innings.

Snitker's advice for his young starter? "Have fun. Don't do anything different. Pitch your game. Don't try to reinvent the wheel. You're throwing good. Trust your stuff. It's another level, but you'll adjust."

Acuña missed the past two weeks with an injured wrist, while Markakis had to sit out after potentially being exposed to COVID-19.

“I feel good," said Acuña, who was hitting .258 with four homers and nine RBIs before he went down. “I'm happy to be back doing what I love. I'm ready to give 100 percent to the team.”

The plan was for Anderson to spend most of this season at Gwinnett, but the coronavirus pandemic shut down the minor leagues. So he's been working at the Braves' alternate training site, awaiting his chance.

Even though the Braves are leading the NL East, their rotation has been a major issue. Felix Hernandez opted out before the shorted season even began, Mike Soroka went down with a season-ending Achilles injury, and Mike Foltynewicz and Sean Newcomb were both demoted because of their poor showings.

Toussaint failed to take advantage of his shot at earning a spot in the rotation, going 0-1 with a 7.89 ERA over six games including four starts.