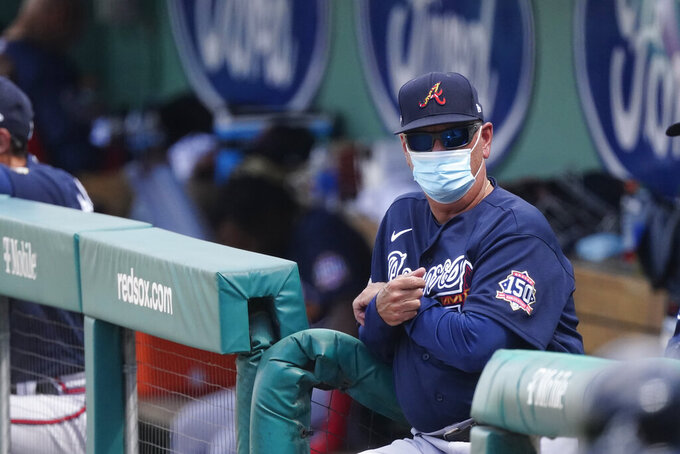 ATLANTA (AP) — After coming up one win short of the World Series, the Atlanta Braves have only one goal in mind for 2021.

The Braves finally won a postseason series — two of them, in fact — for the first time since 2001, and they had Los Angeles on the ropes with a 3-1 lead in the NL Championship Series.

Alas, the Dodgers won the final three games and went on to beat the Tampa Bay Rays in the World Series.

For the Braves, the agonizing finish to the pandemic-shortened season merely fueled their determination to win Atlanta's first Series title since 1995.

The front office did its part to get over the hump, re-signing slugger Marcell Ozuna to a $65-million, four-year contract and bolstering a thin rotation by landing Charlie Morton and Drew Smyly.

“Are we in a competitive championship window?” general manager Alex Anthopoulos said. “Sure, there's no doubt about it.”

Some things to watch from the Braves in 2021:

Atlanta has one of the most dynamic 1-2 hitting punches in the big leagues with Freeman and Ozuma. Freeman was a runaway choice for the MVP award after bouncing back from a frightening bout with COVID-19 to hit .341 with 13 homers and 53 RBIs. His numbers were greatly helped by the guy hitting behind him. Ozuna nearly won the Triple Crown, leading the league in homers (18) and RBIs (56) while finishing third in average (.338). And don't forget Ronald Acuña Jr., who battled injuries but still had 14 homers and 29 RBIs in 46 games. The 23-year-old outfielder is just two years removed from a 41-homer, 101-RBI, 37-stolen base campaign.

The Braves have three potential aces — none older than 27 years old. Max Fried followed up a 17-win season in 2019 by going 7-0 with a 2.25 ERA. He finished fifth in the NL Cy Young balloting. Mike Soroka was an All-Star in 2019 and the opening-day starter last season, but he went down with a torn Achilles in just his third appearance. Soroka will likely begin the season on the DL to make sure he's fully recovered, but it won't be long before he rejoins the rotation. And then there's Ian Anderson, who dazzled in his rookie season by going 3-2 with a 1.95 ERA in six regular-season starts before showing poise beyond his years in the playoffs.

The starting rotation was extremely thin last season, so the Braves made an aggressive push to add more depth. Postseason stalwart Morton returned to the organization with a $15 million, one-year deal, while Smyly signed on for one year at $11 million. Combined with the team's talented young starters, the rotation suddenly looks like one of the best in baseball. On the other hand, the bullpen is a bit of a question mark after being a huge strength in 2020. Closer Mark Melancon (11 saves) left in free agency, and there's no one else on the roster who had more than one save last season. Former Giants closer Will Smith is an obvious candidate, but he surrendered seven homes in just 16 innings. Chris Martin, Tyler Matzek and A.J. Minter all have the potential to finish out games in what could be a closer-by-committee approach from manager Brian Snitker.

CF Cristian Pache impressed last season after a late-season call-up, starting six games in the NLCS. Even though he's got scant experience above Double-A, the Braves are confident that the 22-year-old is ready for the big leagues. He certainly showed off his enticing talents against the Dodgers with a second-deck homer and an above-the-wall catch. Pache is battling for the starting job against former All-Star Ender Inciarte, who has been plagued by injuries and is coming off the worst season of his career.

The Braves are planning to allow 33% capacity — about 13,500 fans per game — at Truist Park to start the season. Team officials will review the seating plan after each homestand and make adjustments as needed to ensure fan safety. No fans were allowed in MLB stadium during the 2020 regular season because of the pandemic, though hundreds of Braves’ backers gathered on a lawn outside their ballpark to watch the Braves' playoff run on a giant video board. Matzek looks forward to having them closer to the action in 2021. “We have great fans,” the reliever said. “I can’t wait for them to be in the stadium with us this year.”