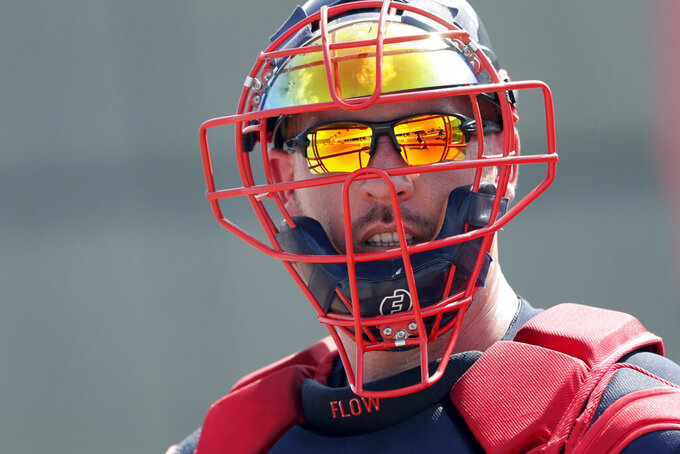 The Atlanta Braves will be without their top two catchers, Tyler Flowers and Travis d'Arnaud, for Friday's opening game at the New York Mets after both players showed symptoms of the coronavirus.

Manager Brian Snitker said Friday that Flowers and d'Arnaud have tested negative for the coronavirus but did not travel with the team because they had symptoms. Snitker said he did not know what the symptoms were, and he hoped the two just had “a bad cold."

Snitker said the team is being careful because “we’ve had guys test negative and the next day they test positive."

First baseman Freddie Freeman and right-hander Touki Toussaint are back with the team and on the opening-day roster after testing positive at the start of summer camp. Left-handed reliever Will Smith and infielder Pete Kozma have not returned following positive tests.

Freeman said he was grateful Flowers and Contreras reported the symptoms even though it meant they would miss the opener and possibly more games.

“I applaud them for being truthful,” Freeman said. “It’s tough when you lose your two catchers but no one is going to feel sorry for us. The Nationals didn’t have Juan Soto last night.”

Snitker said the team was trying to avoid contact between the catchers and other players in case they do have positive tests.

Alex Jackson and William Contreras are next in line at catcher. Jackson is listed as the starter for Friday's opening game.

The Braves also are without left-hander Cole Hamels, who was placed on the 45-day IL with left triceps tendinitis.

“If he gets back in September, great,” Snitker said. “Hopefully he can get back and help us.”

Snitker called Jackson “a very solid catcher" who hit “a couple homers" in summer camp. “He should be feeling good about himself," Snitker said.

The manager added that Flowers and d'Arnaud will continue to be tested.

“I don’t know if it’s not just a bad cold, but in these times you’re cautious," Snitker said. “If this happened a year ago you’d bring them in and treat them and they’d probably still be available."

NOTES: Still looking for outfield depth after Nick Markakis opted out of playing this season, the Braves obtained Scott Schebler from Cincinnati for cash. Schebler hit 30 home runs for the Reds in 2017 but batted only .123 in 30 games last year.