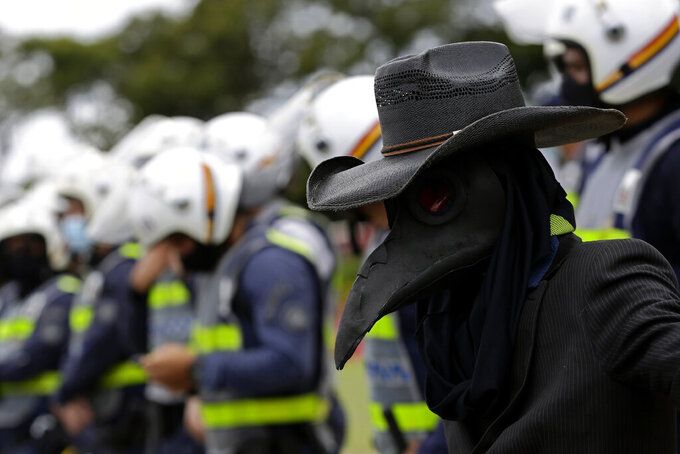 A demonstrator dressed in a bird mask, representing the black plague, stands near police guarding a city government office where demonstrators protest a two-week-long lockdown to curb the spread of COVID-19 in Brasilia, Brazil, Monday, March 1, 2021. It’s the second lockdown in Brasilia since the start of the pandemic one year ago. (AP Photo/Eraldo Peres)

RIO DE JANEIRO (AP) — Brazil dodged the most dire economic forecasts in 2020, but official figures released Wednesday show the COVID-19 pandemic still battered the nation and it continues to dim the outlook for recovery.

Brazil’s gross domestic product contracted 4.1% in 2020, the biggest annual recession since the series began in 1996, according to Brazil’s official statistics institute, known as IBGE. Still, the result is better the 5.3% plunge forecast by the International Monetary Fund in April last year.

Since the beginning of the health crisis, Brazil’s President Jair Bolsonaro has been adamant that the economy must keep running, arguing that lockdowns and restrictions would inflict greater hardship on the population than the disease. That position, which flew in the face of public health experts’ recommendations, helped stave off an even deeper recession, at least in the short term — as did a generous pandemic welfare program.

But the country is once again recording more than 1,000 daily deaths from COVID-19, which could cause further economic slowdown.

“The worsening COVID-19 outbreak is casting a dark cloud over the outlook for the next few months at least,” William Jackson, an economist at Capital Economics, wrote in a report published Wednesday. Jackson pointed to a plunge in retail sales and likelihood of tighter measures to limit the virus’ spread.

The number of new COVID-19 cases in Brazil is still surging, with a new record high 1,641 deaths reported on Tuesday. The state-run Fiocruz Institute said Tuesday that intensive-care unit occupation rates in 18 states and the Federal District had surpassed 80% – a level considered critical.

Monica de Bolle, a Brazilian senior fellow at the Peterson Institute for International Economics in Washington, said the GDP figures don't yet capture the full impact of the disaster, including implications of lives lost, people going on disability from long-lasting side effects and lingering costs for the health system.

Now that the welfare program has ended, “lots of things are going on in the economy and none of them are good, and we’re going to have a very bad year in 2021. Had the government done things differently, it wouldn’t have been that way,” said de Bolle, who has done postgraduate studies in immunology and genetics. “If public health is in complete collapse, obviously the economy will be in complete collapse.”

Bolsonaro has forcefully opposed measures by governors and mayors to limit activity, though the Supreme Court ruled last year that such decisions are local authorities’ prerogative.

Brazil saw a robust rebound in the back half of 2020, with 7.7% and 3.2% growth in the third and fourth quarters, IBGE data showed. Family consumption buoyed results in both quarters, helped by the government welfare program, but that was discontinued at the end of the year.

Brazil’s economy was expected to contract less in 2020 than any other major economy in the region, the IMF’s Western Hemisphere director, Alejandro Werner, wrote in a report last month.

Nearly 14 million people were unemployed in Brazil at the end of 2020, a slight improvement from the third quarter, according to IBGE data. Even more were underemployed.

Under increasing pressure to restore at least some emergency funding to poor Brazilians, Economy Minister Paulo Guedes warned this week that Brazil’s economy could resemble that of Argentina within six months and Venezuela within a year and a half if it doesn’t limit spending.

As mass vaccination progresses, Goldman Sachs' chief Latin America economist Alberto Ramos said in a note Wednesday he expects Brazil’s services industry, which has been particularly badly hit, to recover by the second half of next year.

“In the very near term, the recent pick-up in new viral cases, the acceleration of inflation and the phasing-out of some of the generous fiscal transfers programs may soften the momentum behind the recovery of the services sectors,” he said.