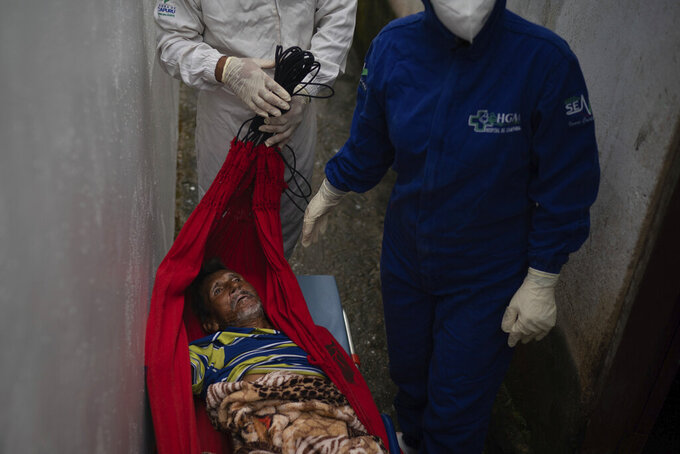 RIO DE JANEIRO (AP) — Brazil's government has stopped publishing a running total of coronavirus deaths and infections in an extraordinary move that critics call an attempt to hide the true toll of the disease in Latin America's largest nation.

Saturday's move came after months of criticism from experts that Brazil’s statistics are woefully deficient, and in some cases manipulated, so it may never be possible to understand the depth of the pandemic in the country.

Brazil's last official numbers showed it had recorded over 34,000 deaths related to the coronavirus, the third-highest number in the world, just ahead of Italy. It reported nearly 615,000 infections, putting it second, behind the United States. Brazil, with about 210 million people, is the globe's seventh most populous nation.

On Friday, the federal Health Ministry took down a website that had showed daily, weekly and monthly figures on infections and deaths in Brazilian states. On Saturday, the site returned but the cumulative numbers of infections for states and the nation were no longer there. The site now shows only the numbers for the previous 24 hours.

Brazilian President Jair Bolsonaro tweeted Saturday that disease totals are “not representative” of the country's current situation. Public prosecutors announced an investigation into the Health Ministry's justification for the change.

A Bolsonaro ally contended to the newspaper O Globo that at least some states had sent falsified data to the Health Ministry, implying that they were exaggerating the toll. Carlos Wizard, a businessman expected to assume a high-level post in the Health Ministry, said the federal government would conduct a review to determine a “more accurate"' toll.

“The number we have today is fanciful or manipulated,” Wizard said.

A council of state health secretaries said it would fight the changes by Bolsonaro, who has dismissed the gravity of the coronavirus pandemic and tried to thwart attempts to impose quarantines, curfews and social distancing, arguing those steps are causing more damage to the economy than the illness.

“The authoritarian, insensitive, inhumane and unethical attempt to make the COVID-19 deaths invisible will not prosper,” the health secretaries council said Saturday.

Supreme Court Justice Gilmar Mendes said Saturday on Twitter that “manipulating statistics is a maneuver of totalitarian regimes.” João Gabbardo, the Health Ministry's former No. 2, told television channel GloboNews that reviewing the death toll "shows the management inexperience in the Health Ministry. There's no sense to that review. When countries do reviews, the number increases.”

While precise counts of cases and deaths are difficult for governments worldwide, health researchers have been saying for weeks that irregularities with Brazilian statistics were making it impossible to get a handle on an exploding situation.

Around the world, coronavirus deaths are being undercounted to varying degrees due to lack of universal testing. Academic groups in dozens of nations have tried to figure out the magnitude of the undercount by studying the total number of deaths in a set period compared to the average of prior years in a nation, state, province or city. Where they find unexplained surges in deaths, it is likely due in large part to undiagnosed cases of the coronavirus.

In Brazil, such efforts have been handicapped by problems with the government statistics that serve as a baseline.

“It is very difficult to make predictions that you think are reliable,’’ said Fabio Mendes, an adjunct professor in software engineering at the federal University of Brasilia, who studies coronavirus statistics. “We know the numbers are bad.”

Brazil’s Health Ministry did not respond to queries about allegations of problems with the data.

The gravity of the problems with Brazil's data became clear last month when academics reviewing death certificates compiled by the federal Civil Registration office — which compiles data from all Brazilian states — found drastic, unexplained fluctuations in monthly deaths in recent years, and puzzling discrepancies between states.

In Rio de Janeiro state, the number of average monthly deaths fell sharply starting in January 2019, a change the Civil Registration office said stemmed from the state court providing duplicate data for previous years. The number of average monthly deaths in Manaus, the capital of the northern state of Amazonas, more than doubled when the shift occurred, which the office chalked up to delay in data submission.

On May 14, as independent investigators were questioning the inconsistencies, the Civil Registration office pulled more than 500,000 death certificates from its website, saying most were from Rio and it needed to review how the figures were tallied nationwide in order to make sure statistics were consistent year over year.

That made it virtually impossible to produce statistically significant analyses of excess death in Rio or Amazonas, two of the Brazilian states hit hardest by the coronavirus.

“Wow,” said Jesús Gómes-Gardeñes, an associate professor in physics and computational epidemiology at the University of Zaragoza, who has studied coronavirus statistics in his native Spain. “Half a million is a hell of a lot.”

Another way to detect uncounted deaths from the virus is by looking at deaths attributed to other conditions, like pneumonia and respiratory insufficiency. In the absence of widespread testing, deaths from COVID-19, the disease caused by the coronavirus, are often attributed to one or more of these conditions.

Brazil''s second most populous state, Minas Gerais, has recorded just 368 coronavirus deaths and has been praised for its handling of the pandemic. But data from Fiocruz, a respected, state-run biology foundation, show deaths from severe acute respiratory infections in the state rose eightfold from 2019 to 2020, to 1,796.

In Rio, the total number of deaths from pneumonia and respiratory insufficiency in the nine weeks through May 18 were 6,909 higher than in the same period last year. But the federal Health Ministry's COVID-19 death toll for the same period was 2,852 — less than half the suspected number.

On May 22, as media and independent researchers debated the discrepancy, the Civil Registration office’s number of pneumonia and respiratory insufficiency deaths in the state fell from 6,909 to 3,599. The office said it was due to reclassification of death certificates that list several related causes of death.

Beyond the shifting and incomplete information, critics say, the Brazilian federal government has further eroded trust in its count-keeping with cosmetic changes to official sites that appear designed to de-emphasize the gravity of the epidemic.

One bulletin published by the president’s press office refers to patients in hospitals and intensive care units as “recovering," even though a significant number eventually die of COVID-19.

“We are becoming an international joke in terms of public health," said Domingos Alves, an associate professor of social medicine at the University of Sao Paulo. “Deaths cannot be hidden by decree.”