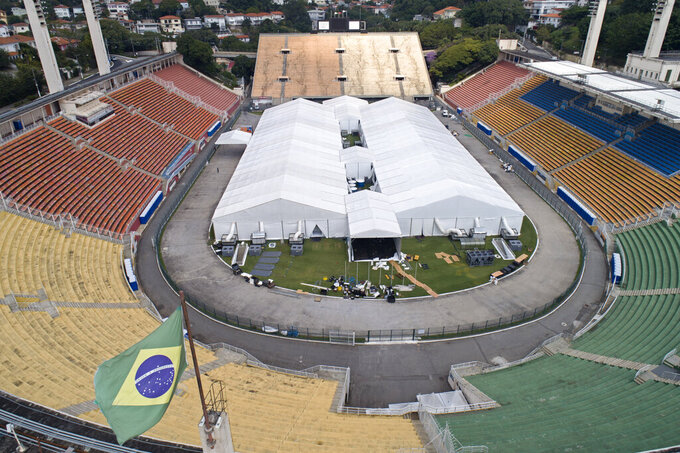 A Health Ministry report issued on Friday said Brazil can currently carry out 6,700 COVID-19 tests a day, but that it will need to process as many as 30,000–50,000 tests daily during the peak of the outbreak, expected in June.

This latest assessment of the public healthcare system raises serious questions about its capacity to face the outbreak in a country of nearly 210 million. It also calls for the maintenance of quarantine measures in states that are most badly hit, challenging President Jair Bolsonaro's more laid-back approach to the virus.

Bolsonaro has compared the new coronavirus to a “little flu” and publicly attacked governors that introduced quarantine measures, such as in Sao Paulo and Rio de Janeiro, two of the country’s biggest clusters.

As of Saturday afternoon, the health ministry had reported 10,278 confirmed cases and 431 deaths. But the outbreak is still in its early phase, the report said, and the country's hospitals are not ready to handle a peak.

Officials pointed to a shortage in trained health professionals “to handle mechanical ventilation equipment, respiratory physiotherapy and advanced nursing care” for critically ill patients, while intensive care units and general hospitalization beds are “not properly structured or in sufficient numbers.”

Authorities are seeking partnerships between the public and private sectors to address shortages in testing capacities, but such agreements would not bear fruit for at lest another two weeks they said.

Officials say past studies of influenza, another respiratory disease caused by viral infection, show that Brazil's continental size and varied climates – temperate, subtropical and equatorial – mean the COVID-19 disease will likely spread and peak at different times of the year, in different regions, making it more challenging for authorities to prepare a national plan.

Bolsonaro has increasingly isolated himself politically by maintaining that jobs and the economy must prevail and that Brazil ”cannot stop.”

His message and public appearances showing him with supporters are at odds with recommendations from Health Minister Luiz Henrique Mandetta. Tensions between the two men have risen as Mandetta, until recently a largely unknown technocrat, emerged as a reassuring figure in the midst of a public health crisis.

The minister has garnered support among Brazilians with daily updates on the coronavirus, filled with technical details, best practices and recommendations from authorities such as the World Health Organization.

In a radio interview, Bolsonaro said his health minister lacked “humility". Mandetta, asked about the president's declaration, said he would not quit: “A doctor does not abandon his patient."