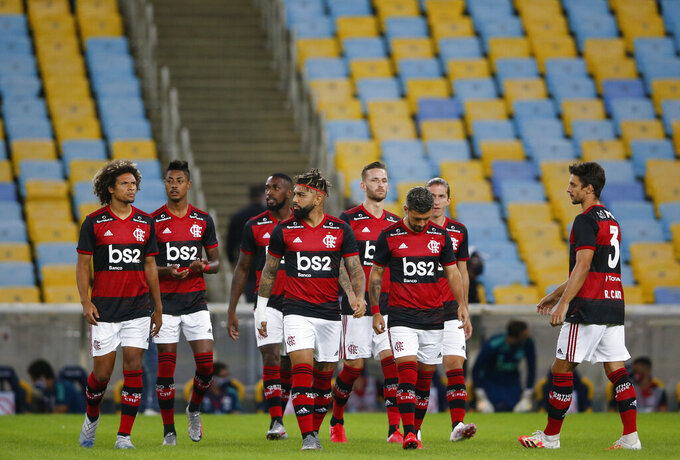 Players of Flamengo stand on the field prior to a Rio de Janeiro soccer league match against Bangu at the Maracana stadium in Rio de Janeiro, Brazi, Thursday, June 18, 2020. Rio de Janeiro's soccer league resumed after a three-month hiatus because of the coronavirus pandemic. The match is being played without spectators to curb the spread of COVID-19. (AP Photo/Leo Correa)

The move was enabled by an executive order issued last week by President Jair Bolsonaro, who is a critic of Globo. The president contends the country's biggest media group is working to undermine him. Globo denies that.

Flamengo, the defending Copa Libertadores and Brazilian champion, broadcast its Wednesday night Rio league clash with tiny Boavista on its online channel. The team won 2-0 at an empty Maracanã Stadium, with an average of 2 million people watching online.

Bolsonaro's order is valid for up to 120 days unless extended by Congress. It allows Brazilian clubs to negotiate broadcasting rights for home matches with whomever they want if they don’t have a contract already in force.

TV Globo had deals with Rio’s soccer body as well as 11 clubs in the state’s first division, but it did not reach an agreement with Flamengo for the local tournament that opens the season in this soccer-crazy country. Small clubs compete only in Brazil’s state leagues.

The Brazilian national league has delayed its season because of the coronavirus outbreak.

The total value of TV Globo's deal with Rio's soccer body is close to $200 million for 2016-2024, according to documents obtained by news website UOL. Some local clubs received at least $3.4 million from the network, but Flamengo did not sign on, wanting more.

“Brazilian legislation says that, in order to broadcast any match, it is necessary to acquire rights from both clubs involved,” TV Globo said in a statement, adding that Bolsonaro’s order couldn’t alter its contract with the Rio league. “Legally, no one could broadcast Flamengo matches in the Rio league and only Globo could broadcast (matches of) others.”

Bolsonaro signed the order shortly after a visit from Flamengo executives. The president says soccer and other economic activities should resume despite the pandemic, which so far has caused more than 60,000 deaths in Brazil.

Media analyst Mauricio Stycer said Bolsonaro's order could be a test for a bigger battle over broadcasting rights for Brazilian national competition. TV Globo and Flamengo have a broadcasting deal for its national games through 2024.

"A matter of this magnitude should not be decided by executive order. It will create a lot of legal insecurity for all parts involved. There are other players involved, so much money involved. The best to do would be to have a proper discussion at Congress, where all could speak," Stycer said.

Bolsonaro and Globo have been at odds since his successful 2018 campaign. The president and his ministers do not give interviews to the Globo group’s outlets. His supporters have harassed its journalists during protests and on the streets.

Bolsonaro has also suggested he could remove TV Globo from the airwaves when its license comes up for renewal in 2022, if he should find irregularities in its operation, though he gave no details.