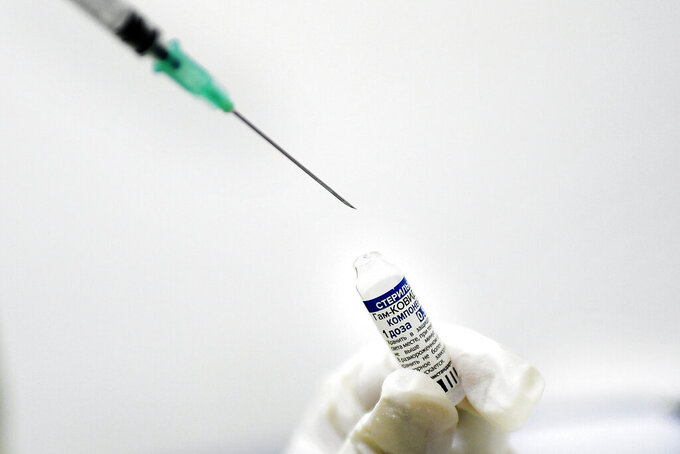 The five-person board of the Brazilian Health Regulatory Agency unanimously decided late Monday that consistent and trustworthy data required was lacking for approval of the requests from 10 states, according to a statement. Another four states and two cities have also sought authorization to import the vaccine.

The agency, known as Anvisa, said there were faults in all clinical studies of the vaccine’s development, as well as absent or insufficient data.

The agency statement said that analysis indicated that the adenovirus on which the vaccine is based has the capacity to replicate, which could cause sickness or death, particularly among those with low immunity or respiratory problems. The Russian fund overseeing the vaccine's marketing globally denied the claim.

“We will never permit, without the existence of due proof required, millions of Brazilians to be exposed to products without the due proof of their quality, safety and efficacy or, at minimum, in the face of the grave situation that we’re living through, a favorable cost-benefit relationship,” Anvisa’s president Antônio Barra Torres said in the statement.

Anvisa’s decision doesn’t affect a separate request from Brazilian company Uniao Quimica for emergency use authorization of Sputnik V produced locally, according to an emailed statement from Anvisa’s press office.

Still, it came as a blow to Russia’s efforts to promote worldwide adoption of the vaccine, whose exports have helped it regain diplomatic footholds in countries where relationships had languished.

“We need additional information on what this lack (of data) means, because there’s already more than enough data," Kremlin’s spokesperson Dmitry Peskov told reporters in a daily briefing.

“The contacts (with Brazil) will continue. If some data is lacking, it will be provided,” he added.

The Russian Direct Investment Fund said in a three-page statement that “no replication-competent adenoviruses were ever found in any of the Sputnik V vaccine batches produced.”

It was also more pointed in its criticism, saying that dozens of national health regulators have approved Sputnik V and Anvisa's decision was “of a political nature and has nothing to do with the regulator’s access to information or science.”

The fund pointed to the U.S. Department of Health and Human Services’ 2020 annual report, which said in a section titled “Combatting malign influences in the Americas” that it had convinced Brazil to not to buy the Russian shot. The U.S. Embassy in Brazil has denied exerting any pressure regarding vaccines approved by Brazil’s health regulator, and Brazil's foreign ministry has denied being contacted.

Daniel Dourado, a Brazilian doctor and lawyer who is a researcher at the University of Sao Paulo, said on Twitter that he doubted politics played any role in Anvisa's decision, as that would have required its directors to lie in their analysis. He added that, while the state governors’ hurry is understandable, Anvisa is correctly fulfilling its duty.

Brazil hasn't lived up to its proud tradition of mass vaccination programs in this pandemic, with the Health Ministry ignoring early opportunities to purchase shots and facing shortages locally of vaccines it did acquire. The country has the world's second-highest death toll, and will surpass the milestone of 400,000 deaths this week. The majority of that staggering tally came in just the last four months.

One of Anvisa’s directors, Cristiane Rose Jourdan Gomes, acknowledged the sensitivity of its decision since making available an array of vaccines is a priority in fighting COVID-19. She said she hopes Sputnik V can bring its information in line with requirements.

Denise Garrett, vice president of the Sabin Vaccine Institute that advocates for expanding global vaccine access, and who is Brazilian herself, also voiced support of Anvisa on Twitter.

“There is no way to approve Sputnik V with the information available at the moment,” she said. --- AP reporter Daria Litvinova contributed from Moscow