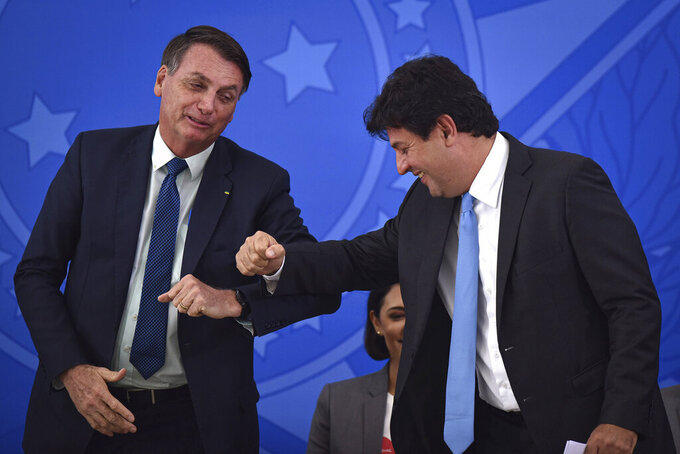 Brazil's President Jair Bolsonaro, left, greets his outgoing Health Minister Luiz Henrique Mandetta during the swearing-in ceremony for the new Health Minister Nelson Teich, not in picture, at Planalto palace in Brasilia, Brazil, Friday, April 17, 2020. Mandetta had garnered support for his handling of the pandemic that included promotion of broad isolation measures enacted by state governors, but had drawn the ire of Bolsonaro, who has said shutting down the economy would cause more damage than confining only high-risk Brazilians. (AP Photo/Andre Borges)

But just weeks before she was due to receive the ventilators, she got bad news. Her local supplier could no longer honor the agreement. Instead, she was told, the equipment was going to Brazil’s federal government.

“The health ministry confiscated the ventilators for our hospital,” said Azevedo from the Instituto Dr. José Frota hospital, where she had planned to open up another 40 ICU beds in May. “It makes no sense … It’s like working against yourself.”

Amid a global pandemic, medical equipment needed to treat patients with COVID-19 and protect health workers has become a hot commodity, with countries around the world competing for crucial supplies. In Brazil, in a scenario also seen in the United States, the competition has become internal. Some states are vying for material with the government of President Jair Bolsonaro, who is already sharply at odds with many governors over coronavirus containment measures. The Supreme Court has defended Maranhao state's purchase of ventilators.

Experts fear such political rivalries could hurt efforts to fight the pandemic in Brazil, which has the highest number of confirmed cases and deaths in the region at 45,757 and 2,906, respectively. The number of infections is thought to be far higher because many people have not been tested.

“It seems that there is a lack of trust between the federal government and governors,” said Walter Cintra Ferreira Jr, a professor in health management at the Fundacao Getulio Vargas university in Sao Paulo. “What we expect from the health ministry is a quick distribution of resources.”

In Maranhao, a northeastern state next to Ceara, the local government has faced multiple setbacks in acquiring the equipment it needs. Maranhao’s Secretary of Industry, Commerce and Energy, Simplício Araújo, said the state had a delivery of 150 ventilators from a Brazilian provider seized by the federal health ministry on March 19. A second shipment from China got stuck in Germany, while a third never left the United States, Araújo said.

Undeterred, the secretary decided on a more unorthodox plan. With his Chinese contacts, Araújo orchestrated a complex scheme to bring the valuable material in a commercial freighter via Ethiopia. The operation, which mobilized some 30 people in Brazil and China for nearly three weeks, avoided further delays by skipping customs in the large airport of Sao Paulo, only declaring the content of the shipment in Maranhao’s airport.

In response, Brazil’s Federal Revenue Service announced that it would pursue legal action, arguing the goods were imported without due licensing from authorities.

“The presidency should support this type of operation, not the opposite,” Araújo said.

This week, the Supreme Court's Justice Celso de Mello ruled the health ministry cannot confiscate a separate order by Maranhao for 68 ventilators, and gave the local supplier 48 hours to deliver the equipment.

The disputes come as Bolsonaro, who has likened COVID-19 to “a little flu,” rages against governors who have passed stay-at-home measures to limit its spread and recently fired his health minister who encouraged the policies, which he says will wreak economic destruction.

Experts and health executives on the ground fear the newly appointed health minister will be influenced by Bolsonaro's feuds with the governors.

In a statement sent to the AP on Tuesday, Brazil's ministry of health defended its overall strategy. It said that as a regulator in the pandemic response, it needed to ensure that “all states in the country are supplied with the equipment and supplies necessary to face the disease.” Since the beginning of the crisis, the ministry said it has delivered 253 ventilators to nine different states and 71 million masks.

On the front lines, public sector medical staff, hospital executives and doctors’ unions are angered by the shortages in ventilators and the failure to provide protective equipment. They say the lack of masks and gloves is exposing doctors to the deadly virus, as well as their families and hospital patients.

For most people, the new coronavirus causes mild or moderate symptoms, such as fever and cough that clear up in two to three weeks. For some, especially older adults and people with existing health problems, it can cause more severe illness, including pneumonia and death

In Ceara state, an emergency services doctor, who asked not to be named for fear of getting fired, bought his own protective equipment in anticipation. Stocks at his hospital – a private facility recently requisitioned by state authorities to treat COVID-19 patients – are running low, he said.

Every morning, he tries not to eat or drink any liquids, so that he won't need to go to the bathroom during his six-hour shifts at the Leonardo Da Vinci hospital.

“Otherwise I would have to change my protective gear, and I know it’s going to run out,” the doctor said over the phone on his day off, a brief but much-needed respite.

Since the crisis began, he has spent an average of 76 hours a week at the hospital’s saturated intensive care unit, praying he doesn’t catch the virus. All around him, colleagues are getting sick.

“There’s going to be a moment when the doctor is going to have to decide: I save myself or I contaminate myself,” he said.