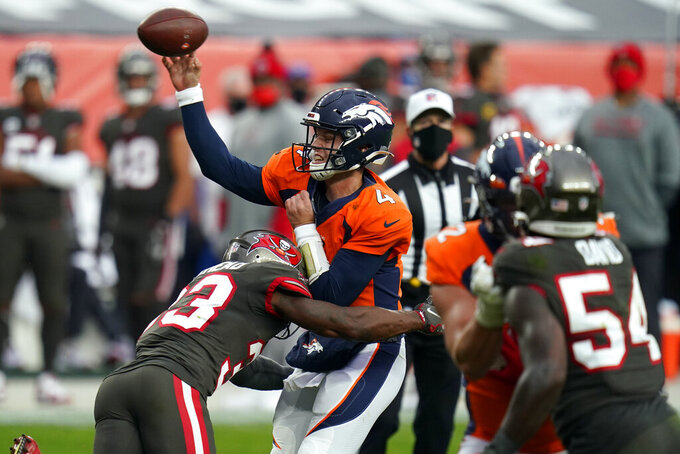 Denver Broncos quarterback Brett Rypien is hit by Tampa Bay Buccaneers free safety Jordan Whitehead as he throws a pass during the second half of an NFL football game Sunday, Sept. 27, 2020, in Denver. (AP Photo/Jack Dempsey)

ENGLEWOOD, Colo. (AP) — Brett Rypien kept his head up when he went undrafted out of Boise State. He didn't get discouraged when he twice got cut by the Denver Broncos.

He didn't flinch when the Broncos valued Brandon Allen over him last year to serve as a backup to Joe Flacco and then Drew Lock.

“I wouldn’t necessarily say discouraged, no,” Rypien said after being named the starter for the Broncos’ game against the New York Jets on Thursday night in a matchup of reeling 0-3 teams. “I’ve always just tried to take the mentality of get better every single day.”

Helping him with that perseverance was his uncle, former Washington QB Mark Rypien.

“He sat his first two years on IR, so having some conversations with him about (how) he overcame adversity throughout his first two years and then being able to win a Super Bowl and be a starter for a few years” helped him learn how to cope and bide his time, Rypien said. “So, I definitely don’t think I ever lost hope or was discouraged. I just tried to get better.”

“Yeah, we’re going to start Mark -- I mean Brett -- I keeping calling him Mark at times because of his uncle,” Fangio said. “But we’re going to go with Brett; but we do have the ability to mix Jeff in there some in the game if we feel like we need to.”

Driskel played admirably after replacing an injured Lock (shoulder) in Denver's 26-21 loss at Pittsburgh two weeks ago, although he froze and took the sack on fourth down at the Steelers' 15-yard line in the waning minutes.

Driskel started last week against the Buccaneers but was limited to 176 yards and was sacked five times and intercepted once in Denver’s 28-10 loss.

He was replaced by Rypien on the Broncos’ final drive, and Rypien completed his first eight passes for 53 yards before throwing an interception in the end zone.

“Up until the last throw when he made a bad decision and a bad read, he played pretty good in there,” Fangio said. “So we want to see if that can continue.”

Rypien showed good enough recognition of defense alignments to change calls and protections and he was quicker throwing the ball than Driskel, who was sacked 11 times in the last two weeks.

“I’ve seen a lot of defenses,” said Rypien, who started 49 games in college. “I think that’s probably my best quality is being able to understand defenses and think fast and get the ball out.”

Rypien, who spent three weeks on Denver's active roster last year and the rest of the season on the Broncos' practice squad, will be the ninth QB to start for the Broncos since they won Super Bowl 50 in Peyton Manning’s final game, joining Trevor Siemien, Brock Osweiler, Paxton Lynch, Case Keenum, Flacco, Allen, Lock and Driskel.

Wilkinson will be replaced by 12th-year veteran Demar Dotson.

“He’s obviously an experienced player. He’s played right tackle 10,000 snaps in this league probably, so we feel good about putting him in there,” Fangio said.

The injured Broncos are making a combined $53.4 million this season, by far the highest IR payroll in the NFL and nearly $20 million more than the runner-up Dallas Cowboys ($33.5 million).

The NFL relaxed its IR rules this year on account of the COVID-19 pandemic and any player can be activated after three weeks. The Broncos didn’t place Lock on IR so he could continue to attend practice for so-called “mental reps.” He's expected to miss a few more weeks.