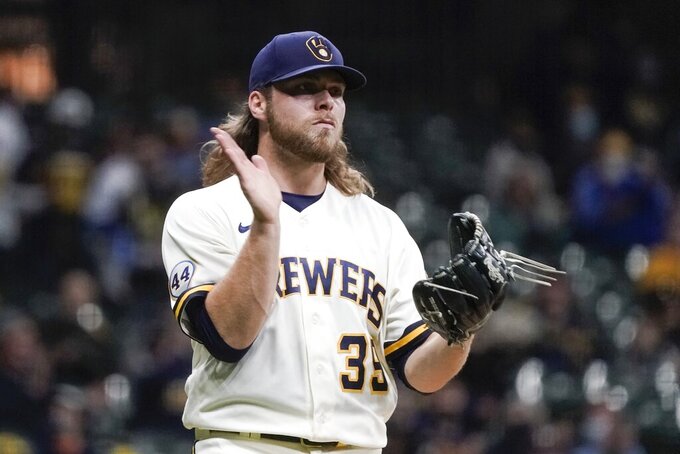 Milwaukee Brewers' Corbin Burnes reacts after getting Miami Marlins' Sandy Leon to strike out during the fifth inning of a baseball game Monday, April 26, 2021, in Milwaukee. (AP Photo/Morry Gash)

MILWAUKEE (AP) — Milwaukee Brewers ace Corbin Burnes says he tested positive for the coronavirus last month but remained asymptomatic throughout his stint on the injured list.

Burnes is expected to start Thursday against the St. Louis Cardinals in his first appearance since April 26. He is 2-2 with a 1.53 ERA, 49 strikeouts and no walks in 29 1/3 innings.

Although the Brewers are among the major league teams that had some protocols relaxed after reaching an 85% vaccination rate, Burnes said Wednesday he opted against getting vaccinated for personal reasons.

Burnes said he had “no clue” how he might have gotten the virus and initially believed it was a false positive.

“So we did all the subsequent testing after, and it came back that it was an actual positive,” Burnes said. “We were fortunate enough that throughout the contact tracing and everything else that no one else was forced to miss time and no one else tested positive. So as far as that front goes, it was successful.”

Burnes said he has no concern about whether he could pick up where he left off after missing a couple of starts.

He has an opportunity on Thursday to break the Major League Baseball record for most strikeouts to start a season without allowing a walk. Los Angeles Dodgers reliver Kenley Jansen punched out 51 batters in 2017 before issuing his first free pass.

“My goal always as a pitcher is to go out there and to minimize how many guys you put on base,” Burnes said. “For me this year, I’ve done a really good job of making guys earn it, to try to hit good pitches to get on base and earn their way on, and obviously I’m not going to be able to not walk anybody all year.

"At some point, it’s going to happen. But for me, it’s just going out there and trying to minimize the number of unexecuted pitches and make guys earn it to get on base.”

Burnes allowed just one run in his first four appearances before giving up five runs – four earned – over five innings in an 8-0 loss to Miami on April 26. Opponents are batting .152 against him.

Although he had to be away from the team for 10 days due to his positive test, Burnes said he was able to continue his own workouts since he was asymptomatic.

"There’s a little grass field right outside our apartment complex and I had a net. I was fortunate to have some balls and stuff with me from the offseason, so I was able to throw into a net every day and do everything in my power to keep the arm, to keep the body ready.”