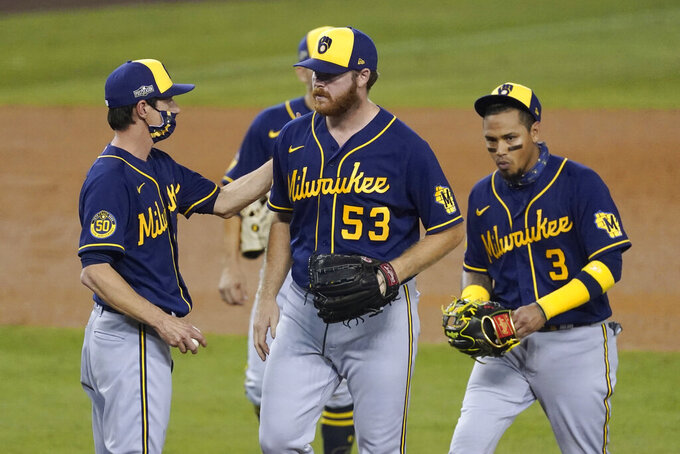 The hitting struggles that hampered the Milwaukee Brewers throughout the pandemic-shortened regular season proved fatal in the playoffs.

With a roster decimated by injuries, the Brewers totaled two runs while getting swept by the Los Angeles Dodgers in a best-of-3 NL wild card series. They got eliminated while striking out 13 times and mustering just four hits in a 3-0 loss on Thursday night.

“It didn’t go the way most of us wanted offensively,” outfielder Christian Yelich said. “But we never quit. We kept battling to the end. It definitely wasn’t pretty and it didn’t go to plan. Obviously, we need to improve in that department next year. I think we will.”

Milwaukee (29-31) never was above .500 but capitalized on the expanded 16-team playoff format to land a third straight postseason berth, the first time in franchise history that’s happened.

“That’s part of baseball,” Yelich said. “Injuries are going to occur. Unfortunately, ours had some bad timing.”

The Brewers faced plenty of other obstacles this season.

Milwaukee lost one of its key players when center fielder Lorenzo Cain opted out after playing just five games. General manager David Stearns acknowledged Sunday that “a lot of the moves I made last offseason didn’t pan out the way I thought they were going to pan out.”

Those moves included sending outfielder Trent Grisham and pitcher Zach Davies to San Diego for infielder Luis Urias and pitcher Eric Lauer. Grisham posted an .808 OPS and Davies went 7-4 with a 2.73 ERA. Urias had a .602 OPS while Lauer was 0-2 with a 13.09 ERA.

Catcher Omar Narvaez hit 22 homers and posted an .813 OPS at Seattle last year, but he batted just .176 with a .562 OPS for Milwaukee. Justin Smoak and Brock Holt were released after slow starts.

Yet the Brewers still reached the postseason, albeit with a losing record.

“What I just told the guys is I have so much respect and admiration for what they did this year,” manager Craig Counsell said. “This team never had an extended period of time when it felt like things just went right. It felt like there were always hurdles being thrown up in front of us, and we still got to this point.”

This may have been Braun’s final season with the Brewers.

“Who knows if this was the last one?” Yelich said. “He hasn’t officially said he’s done, and that’s for him and his family to decide. And if he is done, he can hang his hat on having a great career. As a kid, you dream of playing in the big leagues and having the kind of career that he had.”

Milwaukee’s hopes for boosting its offense next year start with a bounce-back season for Yelich.

The Brewers’ greatest strength was the back end of their bullpen with Williams and Hader.

Hader had a $4.1 million salary this year after losing his arbitration case and earned $1,518,519 prorated. The Brewers must decide whether to keep Hader or trade him before his salary rises.

By making the playoffs for a third straight year, the Brewers believe they’ve established a benchmark for what’s expected. The next step is to make these playoff trips last a bit longer as this franchise seeks its first World Series title.

“We’re not satisfied just getting to the playoffs,” Counsell said. “We expect to play on and that’s going to be a standard I think we’ve helped establish.”