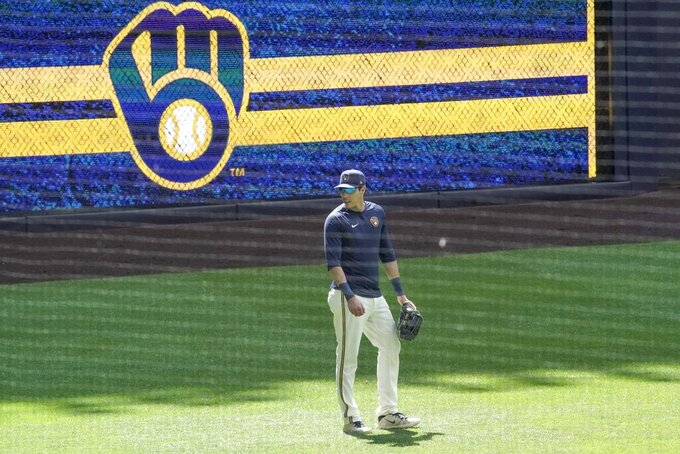 MILWAUKEE (AP) — The Milwaukee Brewers want to celebrate their golden anniversary by accomplishing something they have never done before.

After reaching the National League Championship Series in 2018 and falling in the NL wild-card game last year, the Brewers are seeking an unprecedented third straight playoff berth during this unusual 60-game season.

The Brewers launched their franchise in 1970. Their only previous back-to-back playoff appearances before the last two years came in 1981-82. Now they will try to make history while dealing with the challenges of playing through a pandemic.

“This year we’ll have to be more connected than we’ve ever been,” outfielder/first baseman Ryan Braun said. “There’s no other choice. I think it’s something we’ve embraced over the last couple years - something that’s allowed us to probably exceed outside expectations.’’

That shorter schedule also means the Brewers must start fast this season after benefiting from September surges the last two years.

“If your team gets off to a bad start, if you take that 1-10 start or 2-10, you’re in a tough position because you don’t have the extended period of time to make that up,” outfielder Christian Yelich said. “During a normal season, you’re going to go through the 2-10 or 2-8 or 1-9. It’s going to happen. But if it happens this season right off the bat, it’s going to be tough to make up that ground.’’

Yelich, the 2018 NL MVP, signed a nine-year, $215 million contract in March. But the Brewers will be missing other key performers from the team that finished 89-73 last season.

The Brewers lost catcher Yasmani Grandal and third baseman Mike Moustakas in free agency. They rebuilt their roster by emphasizing depth and versatility to give manager Craig Counsell plenty of options.

That deep roster was designed for a 162-game season. The Brewers are about to find out how effective it will be in a 60-game schedule.

“One of the things we prioritize in a normal circumstance is trying to prepare for the unexpected,” general manager David Stearns said. “Obviously, we had no idea we were going to be dealing with a pandemic and the type of disruptions we have encountered. With that said, I think the same principle applies: We have to be ready for the unexpected.’’

The Brewers’ wholesale changes included the free-agent signings of outfielder Avisail Garcia, pitcher Brett Anderson, first baseman Justin Smoak and infielders Brock Holt, Eric Sogard and Jedd Gyorko. They acquired Omar Narvaez from Seattle to replace Grandal at catcher. Sogard, Holt and Gyorko can help fill the hole at third base created by Moustakas’ departure. They also acquired second baseman Luis Urias and left-hander Eric Lauer from San Diego for pitcher Zach Davies and outfielder Trent Grisham. Joining the starting rotation are Anderson and Josh Lindblom, who’s back in the majors after spending most of the last five years pitching in South Korea.

The Brewers don’t have any rookies likely to make the impact that second baseman Keston Hiura did last year, when he batted .303 with 19 homers over 84 games. The Brewers were the only organization without any players included in Baseball America’s preseason list of the game’s top 100 prospects.

With the NL adopting the designated hitter this year, Counsell has said he could use Braun and Yelich in that role to rest both former MVPs while also keeping them in the lineup. Smoak is a former AL player with DH experience. Another possibility is Hiura, who’s a much better hitter than fielder.

The Brewers’ bullpen ERA should get a lift from the return of Corey Knebel, who missed all of last season after Tommy John surgery. Pairing Knebel with All-Star reliever Josh Hader could make the Brewers formidable with a lead in the late innings.

The bullpen must produce in part because of the rotation uncertainty. Brandon Woodruff and Adrian Houser are the only Brewers pitchers who made double-digit starts for Milwaukee last season. Woodruff made the NL All-Star team last year and went 11-3 with a 3.62 ERA.