Brexit is back: UK aims to prepare public for Jan 1 EU break 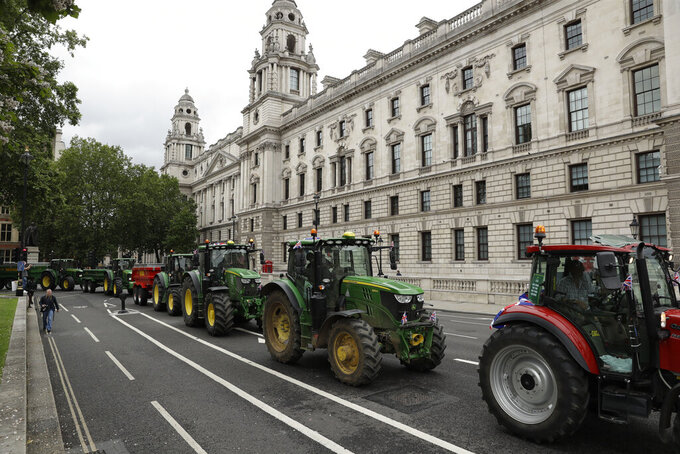 Farmers from the group Save British Farming drive tractors around Parliament Square, in London, in a protest against cheaply produced lower standard food being imported from the U.S. after Brexit that will undercut them, Wednesday, July 8, 2020. (AP Photo/Matt Dunham)

LONDON (AP) — The British government told individuals and businesses Monday to get ready for new costs and red tape — but also an exciting “new start” — when the U.K. leaves the European Union's economic embrace in less than six months.

The government unveiled details of new border arrangements and a major public information campaign to remind Britons that Brexit has not gone away, even though it has been knocked out of the headlines by the coronavirus pandemic.

Britain officially left the EU on Jan. 31, but remains inside the bloc’s economic orbit until the end of 2020.

Advertisements under the “The U.K.’s new start: let’s get going” campaign will warn British tourists that starting Jan. 1 they'll need to buy health insurance, arrange paperwork for their pets and check their telephone provider's roaming policy when they travel to the EU.

Companies that do business with the 27-nation bloc — which accounts for about half of Britain's trade — will have to fill in customs declarations and potentially pay tariffs, depending on the outcome of talks about a post-Brexit free-trade deal.

The British government has softened the blow for importers by saying they would not have to complete full customs declarations or pay tariffs for the first six months of next year.

Even with a deal, the U.K. will need a vast new customs and border infrastructure to deal with trade that has flowed unimpeded during the U.K.'s 47 years as a member of the European bloc. The government announced Monday that it plans to spend 705 million pounds ($890 million) on new border posts, computer systems and personnel.

Prime Minister Boris Johnson's Conservative government says the burdens of Brexit will be offset by new economic opportunities as the U.K. strikes fresh trade deals around the world.

Cabinet Office Minister Michael Gove, who is in charge of Brexit preparations, said the full break with the bloc "will herald changes and significant opportunities, for which we all need to prepare.”

Britain and the EU have given themselves until the end of the year to strike a deal on trade, security and a host of other issues.

But negotiations have bogged down amid wide differences on major issues including fishing rights and competition. Even with a deal, the U.K. faces new barriers to business with the EU. Without one, it faces an abrupt, disruptive departure that would hammer many businesses, and with the U.K. economy already hammered by COVID-19.

One major change will be the end of Britons' freedom to live and work anywhere in the EU, and of Europeans' right to settle in the U.K.

More than 3 million EU citizens currently living in the U.K. are entitled to stay. But from January 1, 2021, new immigration rules will apply to EU and non-EU citizens alike.

Britain is introducing a “points based” immigration system that will assess prospective immigrants on criteria including English-language ability, having a job offer from an approved employer, and meeting a minimum salary threshold.

The system is designed to cut the number of low-skilled migrants entering Britain from the beginning of next year, but also aims to make it easier for higher-skilled workers to get U.K. visas.

Johnson said it would be “a humane and sensible system” that allows the U.K. to attract the best talent from around the globe.

“Although of course we are going to be taking back control and we are controlling our immigration system we’re not going to be simply slamming the gates and stopping anybody anywhere coming into this country,'' he said.

Hundreds of thousands of people who work in Britain's publicly funded National Health Service come from abroad, and many in the sector fear post-Brexit staff shortages.

The government said social care workers will not be eligible for the special health care visa. Johnson's spokesman, James Slack, said “immigration is not the sole answer here" and that care homes should “invest more in training and development” to recruit more staff.

London Mayor Sadiq Khan, a member of the main opposition Labour Party, accused the government of “pulling up the drawbridge to much of the talent we continue to need as a city and a country.''

“Rushing through these proposals during the middle of a global pandemic is particularly irresponsible,” he said.

The new border rules announced Monday do not apply to trade between the EU and Northern Ireland, the only part of the U.K. that shares a land border with the bloc. Britain and the EU have agreed that Northern Ireland’s currently invisible border with the Republic of Ireland must be kept free of customs posts and other obstacles to the movement of people and goods to maintain peace on the Emerald Isle.

The U.K. has promised to set out exactly how it will do that later this month.