Bring back the roars: The patrons return to the Masters 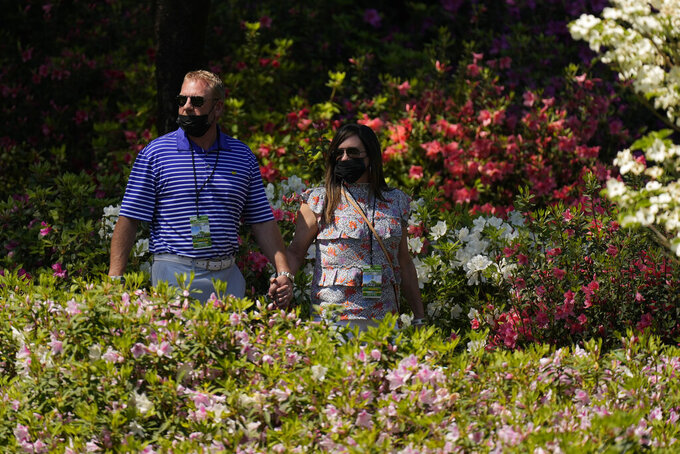 Patrons walk along the sixth hole during a practice round for the Masters golf tournament on Tuesday, April 6, 2021, in Augusta, Ga. (AP Photo/Matt Slocum)

AUGUSTA, Ga. (AP) — Dustin Johnson didn’t feel like his Masters victory was less significant last fall because no fans were at Augusta National to see his win and celebrate with him.

That said, he pays them the ultimate compliment: In his eyes, they make the Masters what it is.

“It’s exciting to have them back,” Johnson said.

Welcome back, patrons. Welcome back, Masters in the springtime. Welcome back, all things at Augusta National that bloom this time of year and provide the backdrop for perhaps the most picturesque locale in golf.

There are new rules — masks must be worn, social distancing policies apply and there’s no eating or drinking around the roped-off spots closest to the greens — but after a one-year pandemic-caused absence, fans are back at the Masters.

“You can see it in my face,” world No. 4-ranked player Collin Morikawa said as he broke into a big smile when asked about the return of patrons. “We love it. I really miss it. It was great to see fans slowly come back over the past month, month and a half. And I know everyone, the Masters, the PGA Tour is doing their job to stay safe and make sure we are still handling everything properly.

“It’s definitely going to line some fairways differently, which is, I think, actually going to be nice,” he added. “So, we missed it, and we’re truly happy they are back.”

The club is allowing limited spectators, a number believed to be around 8,000. It will be the first major to allow spectators since the pandemic began, and what’s always a tough ticket got even tougher this year because of the smaller number of permitted attendees.

“We hoped it would be possible to welcome back all of our patrons in 2021,” Augusta National and Masters Chairman Fred Ridley said Wednesday. “Based on current conditions, however, we concluded the right course of action was to limit patrons this week, and we have done that with appropriate health and safety protocols in place. We are optimistic that conditions will continue to improve, and we look forward next year to the full return of the signature roars that have been a part of Masters history.”

There will be roars this year, at least.

Smaller roars, perhaps, but roars nonetheless. People who have been to Augusta National enough say that the sounds alone can tell you what is happening several holes away.

“You can read what’s going on around this golf course just from the cheers," said Lee Westwood, about to play his 20th Masters.

Fans could attend the practice rounds that started Monday, partaking in all the Masters traditions that they missed out on last year when Augusta National remained closed to virtually everybody. They munch on the pimento cheese or egg salad sandwiches — $1.50 each. Fancier sandwiches, such as the Masters club, or ham-and-cheese on rye, or turkey-and-cheese on wheat, run $2.50. Barbecue sandwiches are $3. Beer is the priciest thing on the concession menu, at a not-whopping $5 apiece.

Fans go to the gift shop and buy whatever they can get with a Masters logo, from chairs to cuff links, towels to T-shirts, golf balls to gnomes.

Then they head back outside, to golf’s rite of spring.

“It’s my first time here and I’m here with a friend who has been to Augusta National many times,” Jack Cavanaugh, a retired sales executive from Jacksonville, Florida, said as he watched Westwood in the practice area. “He says there’s nothing like it. I say he’s right.”

Bubba Watson, a two-time Masters winner who is a notorious Georgia football fan, knows he’ll be hearing a lot more “Go Dawgs” as he walks past people this week. Phil Mickelson was clearly enjoying his interactions with fans during a practice round Tuesday. U.S. Amateur champion Tyler Strafaci said he’s eager to hear the roars and plans to throw some fist pumps their way but noted that it’ll be nerve-wracking to see the people — however many are there — when he tees off alongside Johnson for the opening rounds Thursday and Friday.

“I’m just hoping to make contact with that ball on the first tee,” Strafaci said.

Augusta National is allowing those in the same group — like a family attending together — to place their chairs side-by-side, but all groups must set up at least 6 feet (1.8 meters) away from other parties. Security guards are politely reminding people about the rules regarding eating and drinking near the ropes, along with mask-wearing.

Nobody seems to mind an extra rule or two. It's the Masters.

“Anybody would be glad to win any tournament, any year, fans or no fans,” world No. 2-ranked player Justin Thomas said. “But when you’re able to hit those shots and make those putts and do it in front of however many thousands of fans, it’s even sweeter. I know it’s kind of weird to say or hard to explain, but just having to control your emotions and having to understand what you do in your golf game when you get in those scenarios, it just adds another element to it.”