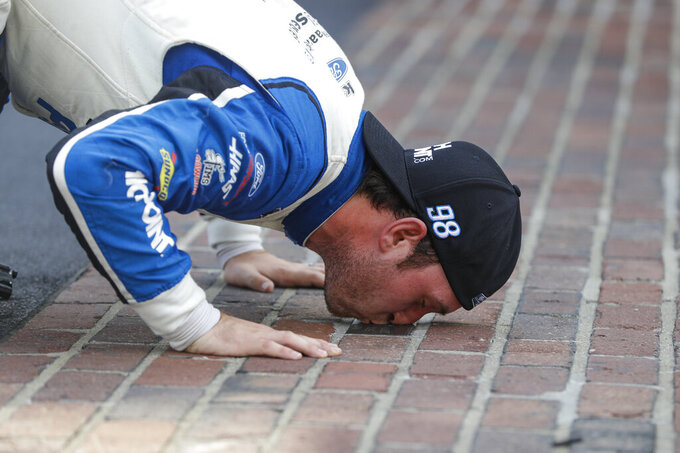 FILE - In this Saturday, July 4, 2020, file photo, NASCAR Xfinity Series driver Chase Briscoe kisses the yard of bricks on the start/finish line after winning the NASCAR Xfinity Series auto race at Indianapolis Motor Speedway in Indianapolis. Briscoe is very clear about his goal of earning a promotion to NASCAR's top Cup Series. He's made his case this season with an Xfinity Series-leading five victories with an eye on adding another win Saturday on the road course at Road America. (AP Photo/Darron Cummings, File)

It took Chase Briscoe longer than he would have liked to finalize his contract this season to continue driving for Stewart-Haas Racing in the Xfinity Series. He had goals firmly set before the ink even dried.

Briscoe began this season determined to race his way into a promotion to NASCAR's top Cup Series, figuring eight wins was his best path. He has won five so far and is second in the championship standings as the Xfinity Series heads Saturday to Road America in Wisconsin.

“I feel like I’ve proved that I can win at this level, and I want to move on to the Cup Series,” Briscoe said. “I’m one of the older guys in the Xfinity Series ... if I’m going to make it to the Cup Series, I feel like I need to do it fairly quickly just from an age standpoint so I can really maximize out my Cup career.”

Briscoe is 25 and in his second full Xfinity season driving for Fred Biagi in a partnership with SHR. The organization went well into winter trying to find sponsorship to continue Briscoe's program this season; the Xfinity entry might have folded if Highpoint.com did not join as a primary sponsor of the No. 98 Ford.

Cognizant of the importance of the relationship, Briscoe in June made a trip to Sparta, New Jersey, to visit with HighPoint CEO Mike Mendiburu and his family — an act no one asked the driver to do. But attention to detail and putting in the effort off the track has been a staple of Briscoe's rise.

The Indiana native volunteered in race shops and slept on couches — anything it took to get a break. Before the July races at Kentucky Speedway, he drove to Lancaster, Kentucky, to catch up with Briggs Cunningham, a former team owner who heard about Briscoe volunteering and gave him a ride. It led to to the 2016 ARCA championship with Briscoe driving for Cunningham Motorsports.

“If it was not for Briggs and his wife I would not have gotten a chance to try pavement racing,” said Briscoe, who started his career racing sprint cars as a huge Tony Stewart fan.

Now his boss is an ardent Briscoe fan — even before Briscoe won on the road course at Indianapolis Motor Speedway in July and climbed the fence in celebration as a tribute to Stewart.

Stewart thought Briscoe had turned his performance up at the end of last season when he logged six top-10 finishes in the final seven races. Even though his deal for 2020 was not completed until the 11th hour, he opened this year with a fifth-place finish at Daytona and a victory at Las Vegas before the season was suspended in March because of the pandemic.

When racing resumed in May, Briscoe won at Darlington Raceway after his wife learned their first child had no fetal heartbeat during a doctor appointment Briscoe missed because he was at the track.

“I felt like Chase really hit his stride and really showed improvement at the end of last season, and then at the beginning of this year he'd taken another step with his on-track performance,” Stewart said. “He's smooth, he doesn't make mistakes. I feel like he's really matured as a driver and came back bigger and better.”

Stewart knows that Briscoe believes he needs eight wins this year to warrant discussion on a promotion but the pandemic has slowed free agency. Aric Almirola and Clint Bowyer are both in contract years for SHR's Cup team and Briscoe also is in limbo.

“We're watching his progression and I've seen a difference in him. I don't think that number is a solid number for any of us at Stewart-Haas,” Stewart said. “He's shown a lot of maturity and those are things that are a lot more important than what the win column is at the end of the year.”

Briscoe is desperate to take the next step but smart enough to recognize he wants to drive competitive cars. He doesn't want to take a job in inferior equipment just to further his career.

“There’s a lot of stuff that’s moving and shaking with a lot of open seats. I feel like there are a lot of dominos yet to fall just to even figure out if there’s a spot available for me.”