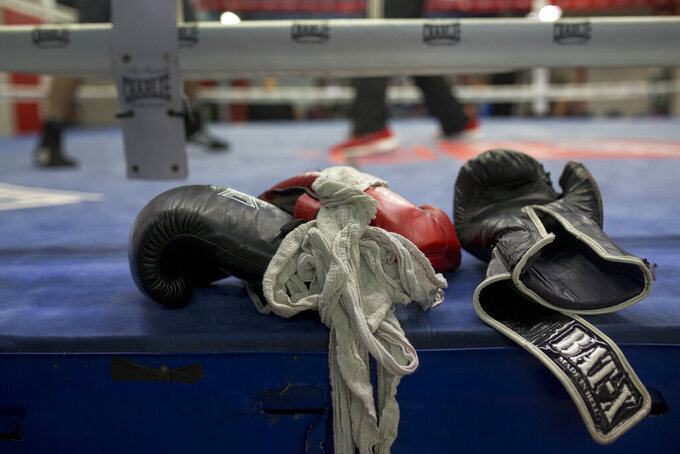 FILE - In this Friday, April 29, 2016 file photo, boxing gloves lie on a boxing ring as boxers work out at El Rayo boxing gym in Madrid, Spain. Journeymen fighters like Jamie Quinn regularly rack up losses in British boxing. They’re hired to fight up-and-comers who are unbeaten or looking to bolster their resumes. Wins are few and far between. The 30-year-old Quinn has a record of seven wins, 104 losses and two draws. He has fought and lost twice since boxing events returned from the pandemic stoppage. (AP Photo/Francisco Seco, File)

On just a day's notice, journeyman boxer Jamie Quinn caught a train to London for a four-round bout. On the way, he learned that they switched opponents and made it a six-rounder.

The news might unnerve some fighters, but Quinn has shown he is ready for just about anything during a career with more than 100 losses.

No preparation, no problem for the 30-year-old Quinn and the many journeymen who eke out a living by traveling around Britain to fight young prospects — nearly every weekend before the coronavirus.

Their role doesn't require intense video analysis of opponents. They're hired to fight up-and-comers, many of whom are unbeaten and looking to bolster their resumes. Wins are few and far between.

Quinn has compiled 104 losses since turning professional, to go with seven wins and two draws. Since boxing events returned from the pandemic stoppage, he's fought and lost twice, most recently on Sept. 12.

His record wasn't the worst on the night. Kevin McCauley slipped to 15-208-12 when he lost to Joshua Frankham, a cousin of heavyweight champion Tyson Fury. Frankham, a super welterweight, was making his pro debut.

“We're there to give these kids a test,” said Quinn, a lightweight. “They like to rack up a couple of wins and get a taste of the pro game.”

Peter Buckley lost 256 of his 300 fights before retiring in 2008. The key is to go the distance because a stoppage means at least 28 days until they're medically eligible to fight again.

Even if it raises eyebrows, the journeymen's role in British boxing is well-established. Promoters anywhere don't want to match promising unbeaten boxers against each other early in their careers.

“They’re part of the lifeblood of boxing,” said author Melanie Lloyd, who has published several books on British boxing. “There's no illusions about it. If they win too regularly, they won’t get any work. In America, they refer to them more as club fighters."

Robert W. Smith, general secretary of the British Boxing Board of Control, dislikes the term “journeyman” but acknowledges they exist.

“We don’t license journeymen, we license boxers," Smith said. “Ultimately, within the industry we know that they are there to teach people lessons, to make them go the distance, and we’re happy with that as long as they're not getting hurt. They go in there, they give a good account of themselves as best they can, to the best of their ability, and we’re satisfied.”

If the boxer isn't trying, his license can be withdrawn, Smith said.

Like other journeymen, McCauley fell into the role. He began his pro career 2-1 before losses started piling up. He quit his job as a roofer and boxed on the road to support his family. He is divorced and has two children.

Along with last-minute bouts, boxers earn extra by facing prospects with knockout power.

“No one wants to fight a big prospect," said the 41-year-old McCauley, who boxes in several weight classes.

“They call me the 999 boxer," he said of 911-like emergency number in Britain. "If they're in trouble and they need someone, they just ring 999 and they get me.”

As “away” fighters, journeymen rarely win decisions. McCauley claims 50 of his losses should have gone his way. He said no one has asked him to lose, but he’ll occasionally hear comments like, “‘another day in the office, Kev.'"

“I’m like, hang on mate, I’m going to punch your face in,” he said. “I'm one of the better, if not one of the best journeymen out there because I will have a go. If my head's there, if I've been in the gym, I've had a good week, then I'll go out to win."

McCauley's last victory was nearly three years ago. He wants 15 more fights — to reach 250 total. After that, he plans to teach boxing to troubled kids — putting to use his recently earned criminology degree.

In recent years, Eastern Europeans had begun replacing some of the local journeymen, but Quinn said he was doing well financially before the pandemic. Like many other boxers, Quinn also works outside the ring; he's a personal trainer.

Quinn hopes to reach 200 fights. He last won 10 months ago and is scheduled to go again on Saturday. There have been 16 shows since July, all with coronavirus restrictions.

He's tried other jobs, including bricklaying. His last fight earned him double his usual fee because it was last-minute.

“Before boxing, people weren't exactly throwing jobs at me,” said Quinn, who lives with his grandfather in Stockport, near Manchester.

As a kid, Quinn looked up to former light welterweight champion Ricky Hatton. As his title dreams faded, he began facing youngsters who have the added pressure of selling tickets to fill home venues.

“Some of them just box, but I’ve had a lot of them try to knock me out,” he said. “They’re trying to look good for the cameras, the crowd, whoever’s there.”

Quinn has only been stopped a few times and has never been knocked out clean. He's suffered a fractured jaw and said his nose has been broken nine times.

It's hard to sleep after fights, Quinn said.

“All sorts of stuff is going through your mind," he said. "Do I really need to be doing this? Are there any easier ways of making money?"